We’re getting farther into this season of Holey Moley: Fore-Ever, and like every episode so far, we are treated to recap from last week reminding us of the loose storyline that is tying this season together that features Rob Riggle trying to save and fix the show with the help of the Muppets. But before we get to tonight’s competition, we are treated to a brief montage from Joe showing off the intricacies and research trips around the world to design the innovative holes of the Holey Moley course. Of course, Rob gets upset that that money isn’t being spent on him when the designers can just use the internet and he can have a nicer trailer. Hate to say it, but I see his point. Now, on to tonight’s first hole, the iconic Dutch Courage en Fuego, a hole that has been around on all four seasons of the show in some form or another. Tonight, Ashley challenges pro stunt-man Paddy B. She puts a little too much gas into her putt and misses the hole, and while running through the spinning blades of the windmill, gets brutally knocked off the platform and into the pool below.

Paddy putts and gets one of the only holes-in-one thus far this season, banking his strong putt off the backboard of the green and into the hole. Then, given his profession, decides to stunt his way through the windmill blades even though he doesn’t have to, and moves on to the next round. We immediately jump over to my favorite hole in the Holey Moley collection, The Distractor. There, we see Maggie take on Bryan and as the wall rotates, they are joined by NFL Player Travis Kelce from the Kansas City Chiefs who jumps into an Irish Step Dance as the two begin their putts. Not only is this a distraction for the players, Rob up in the booth is also quite distracted. Both Maggie and Bryan continue to miss their putts as the NFL pro continues to dance about, and a commercial break is needed. When we return, we discover that there have been over ten missed putts from each contestant as Kelce continues to be what is likely the most successful distraction in the history of the hole. On her 12th shot, Maggie is successful and Bryan cannot match it, securing her win and advancement to the next hole. Joe and Rob wave to Kelce below from their booth and Joe points out something I’ve noticed all season so far – the glass behind them is quite filthy.

Before the next hole, we get a clip of Kermit continuing to recruit Muppets on behalf of Rob, and he meets with Lew Zealand and his boomerang fish. The muppet suggests that HE go into The Distractor with his fish, but also with Kermit attached to them as he flings them. That would be quite distracting indeed. 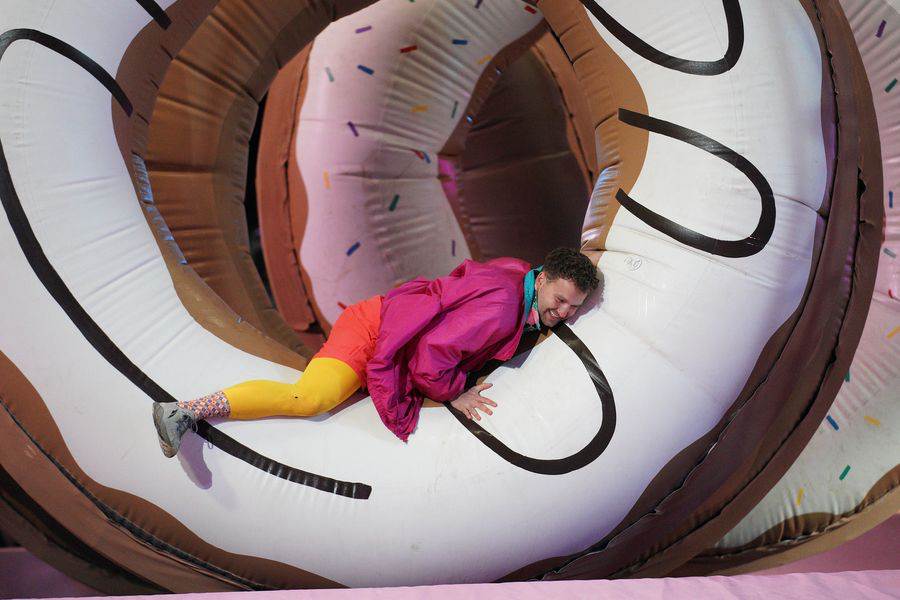 Over to Donut Hole, where Mini-Golf course owner Dylan is going head to head with Tony Starks. No, not Tony Stark, but Tony Starks. Sorry, Rob. Tony hits a sprinkle with his putt and lands behind a ridge. As he goes to make the trek through the swinging donuts, Rob suggests he put on the Iron Man suit to make it easier, but again, this is Tony Starks. Not Stark.

Dylan makes his putt and lands in almost the exact same spot as Tony, but has a much easier time traversing the donuts, becoming the first person in Holey Moley history to make it successfully through the hole. Time to take it up a notch, and replace the donuts with way smaller bagels instead. After another commercial break, we see the evenly matched pair finish their putts, with Dylan winning and moving on to the next round. Over at The Pecker, Kate and Leroya (who thinks she’s full of magic) take on the giant bird. While Kate has a decent putt, her jump into the swaying bird leaves the beak of the woodpecker smashing right into her face, to a point where crew helped her out of the pit below and both Joe and Rob more concerned than with most contestants on this hole.

Leroya’s putt makes it into the channel but hits a block and kicks right, landing on the opposite side of the green in a horrible spot. As she jumps, her magical cape does not help (hasn’t she ever seen The Incredibles?) and she takes an uppercut from the beak herself and flies backward into the pit below. Leroya fails to make her shot and force a putt off, giving Kate the win.

Rob then checks in with Kermit where seemingly out of nowhere, Rob suggests that he and Kermit are on the same page, and it’s time to get rid of Joe Tessitore. Kermit tries to steer him away from this idea, saying it would be difficult and auditions would have to be held, it's a whole process. Well, as predicted, Rob thinks that means Kermit will take care of it, but Kermit insists not this time. Joe is too good. After a commercial, we see Kermit give up on himself immediately and hold auditions for Joe’s replacement, starting with Sam the Eagle. Upon hearing about a mini-golf obstacle course game show, Sam is left with only one question: Why?

Back to the course, where the next round is kicking off with Stuntman Paddy going head to head with mini-golf course owner Dylan at Trap-Tee-Ze. Dylan launches his shot onto the green, placed beautifully just behind a ridge near the hole. Paddy however, hits his shot way too hard and finds his ball bouncing off the green and into the surrounding water. Dylan swings on the Trapeze and fails to latch onto the Rob Riggle dummy, but stuntman Paddy times his swing perfectly, and successfully clings to the dummy and lands on the inflatable green, sparing himself the stroke penalty.

Paddy’s shot from the drop zone is a good one, but he still misses the hole, and taps it in. With Dylan making his second shot with the stroke penalty, the two now must enter into a putt-off. Again, Paddy puts a little too much gusto into the shot and misses, while Dylan makes it into the hole, securing his spot in the final round. Round 2 continues at Corn Hole, where Kate and Maggie battle to find out who makes it to the finals themselves. Kate’s putt gets her onto the green but she moves very slowly during her run along the corn, and finds herself exploding into the pit of kernels below. Maggie’s putt was also very good, but her run however, was not. During her sprint, she lost her footing and found herself in the kernel pit well before the corn even had a chance to explode. Thankfully, her putting made up for it, and Maggie found herself winning the hole and moving on the final round. In an episode that seems to feature a bit more Muppet fun than previous installments, we then see Statler and Waldorf watching a television cracking some jokes at the show’s expense. Frankly, I’m a little surprised this hasn’t been happening all season, but this could also be just the beginning. Finally, we head over to PoleCano where finalists Maggie and Dylan take on the challenging hole. With Maggie, who earlier proclaimed she gets nervous while putting and this is her comeback, and Dylan, who gets to play 60 hours a week on the mini-golf course he owns, Rob and Joe decided to get in on some betting action with each other. Joe goes based on stats and sides with Dylan while Rob has faith in Maggie and bets a car and his shoes at extreme odds with Joe. Joe takes the action, makes a ticket and signs it with the bet firmly in place.

Maggie’s putt lands her in the sand channel, giving her less than prime placement on the green. She jumps on the zip line and rockets into the pole, but fails to get a grip and splashes down in the pool below.

Dylan’s putt lands perfectly in the tiki channel, giving him a spot mere inches away from the hole on the green. He too fails to stick the landing on the pole, but regardless, Rob is already trying to cancel the bet.

Maggie gives Rob a little bit of hope with a beautiful putt from her awful placement in the sand, but Dylan is right there and wins the hole, the plaid jacket and the golden putter, while Joe wins a used car and Rob’s shoes, pending he can prove it without the ticket that Rob tries to eat to destroy.

Holey Moley: Fore-Ever! Airs on Tuesdays at 8:00 PM on ABC, and next day on Hulu.