Long Live The Pumpkin Queen is Sally’s much-anticipated story following on from the classic Tim Burton film, The Nightmare Before Christmas.

I had high hopes for this book and they were met; nay, exceeded. Author Shea Ernshaw does a caring and clever job of weaving renowned Burton magic through her own story. Fans will delight in spending more time with NBC’s rag doll darling, Sally (and Jack’s beloved ghost pup, Zero!), in her quest to navigate her new role and save Halloween Town. 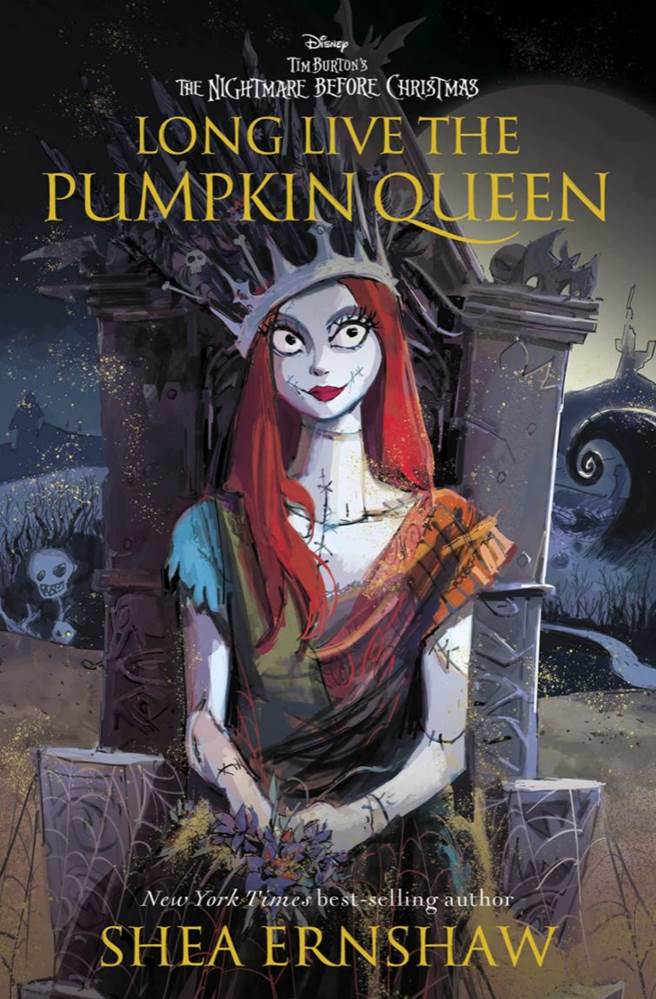 What is Long Live The Pumpkin Queen about?

Sally Skellington is the first ever Pumpkin Queen of Halloween Town after a whirlwind courtship with her true love, Jack. Sally and Jack are now married and Sally adores Jack with every inch of her fabric seams. The problem is, she can’t say the same for her new role as Queen.

Cast into the spotlight and tasked with all sorts of royal duties, Sally can't help but wonder if all she's done is trade her captivity under the peculiar Dr. Finkelstein for a different – albeit gilded – cage. But when Sally and Zero accidentally uncover a long-hidden doorway to an ancient realm called Dream Town in the forest Hinterlands, she'll unknowingly set into motion a chain of sinister events that put her future as Pumpkin Queen, and the future of Halloween Town itself, into jeopardy. Can Sally discover what it means to be true to herself and save the town she's learned to call home, or will her future turn into her worst nightmare?

Ernshaw does an exceptional job capturing Sally’s voice and is consistent in building on Burton’s beloved original character. It wouldn’t be Sally’s story without references to fabric, seams and dead leaves, as well as her cunning potion concoctions. In addition to her physical composition and resourcefulness, readers are wholly reunited with the Sally they know and love – a young rag doll who continues to follow her heart and intuition despite encountering so many obstacles. The obstacles mount in this new adventure story as an initially timid and shy Sally learns to believe in herself and step into her full potential while maintaining the sweet, selfless and determined nature that she has possessed all along. Written in first person, Sally shares her intimate thoughts, hopes and fears about her new role, what is expected of her, and where she feels she fits in – or doesn’t fit in – to this new life.

Some great character reflections peppered throughout this book are captured in the below quotes:

“…[T]here is nothing quite so wasted as a life unlived. And I intend to live mine. Fully. Unbound by the rules of others. Queen or not, we all deserve these things. Freedom. Hope. A chance to find out who we really are.”

“Sometimes a home is a town, a house with four walls. Other times, it’s two hollow eyes in a skull, a skeleton without a heartbeat. It’s here… in Jack’s arms.”

“I feel suddenly awake and alive, a woman who isn’t simply a rag doll, but a ruler who has traveled to all the realms, even the human world, to set things right. Who feels a spark, a wrath growing inside her.”

A sequel and an origin story

Readers get a sequel and an origin story in Long Live The Pumpkin Queen. I had no idea what sort of adventure to expect but was enthralled every step of the way. While basking in a deeper dose of Sally, fans visit not only Halloween Town, but other exciting and unusual realms too, including Valentine’s Town, St. Patrick’s Town, Thanksgiving Town, Easter Town and Dream Town. The realms are explored in a fun-loving way while also contributing to moving the story forward.

Jack gets a much smaller role in this story than in The Nightmare Before Christmas which is to be expected and he is perfectly positioned to be the supportive skeleton husband he was destined to be. Most of the Halloween Town gang also make an appearance – Lock, Shock and Barrel, The Mayor, Dr. Finkelstein, The Vampire Prince, the Witch Sisters – and Zero gets a welcome starring role. New characters like Ruby Valentine, Queen of Valentine’s Town, are also great fun and importantly shape Sally’s story and character development. Ernshaw’s characters made me long for this story to become a film so fans can see the new characters “Burtonized” in the iconic macabre claymation style alongside the classics.

A worthy addition to The Nightmare Before Christmas universe

Long Live The Pumpkin Queen is a worthy, exciting and charming addition to The Nightmare Before Christmas universe. The story and characters – like Sally’s seams – are threaded together beautifully, coming apart and back together in all the right places.

Long Live The Pumpkin Queen will be released later this summer.