Last week, the world fell in love with Kamala Khan after the first episode of Ms. Marvel debuted on Disney+. The big Avengers fan snuck out to AvengerCon and learned, the hard way, that she has some cosmic abilities. Now faced with these incredible new powers and her very disappointed mother, Kamala is going to learn what it means to balance superhero life with the life of a teenaged girl.

The episode opens with Kamala walking into school with a newfound confidence. She bumps into a mysterious new guy and they share a bit of a moment before she bumps into Bruno. He tells her he needs to see her powers again because he couldn’t see anything in the videos she sent him. She explains that she thought she had Ant-Man powers and makes a joke about looking younger than she really is, a nod to the seemingly immortal Paul Rudd.

They then learn that Zoe has gained followers since being saved by a mysterious new superhero. Kamala wants to use her new powers to grow her follower count but Bruno explains that that would defeat the purpose of a secret identity.

They then see Zoe tell her story to a group of kids. She makes up a nickname for the hero, calling her Night Light, which they accept as her name. Zoe then tells them she’s going to have a party on Friday night and she invites the new guy Kamala met earlier. Seeing this, Kamala decides she, Bruno and Nakia are going to the party.

Kamala and Bruno find a private place where she can show him her new cosmic powers. Her fist begins to grow and it becomes clear she can’t control her abilities just yet. Together, they agree she needs to train a bit before she can become a superhero. Interestingly, Bruno explains to her that her powers aren’t coming from the bangle, but the bangle actually unlocked an ability that was already in her. This is great news for comic fans because Kamala is an Inhuman in the comics and her powers are awakened by the Terrigen Mist. It’s good to know it’s not just a magical weapon she’s wielding.

After seeing that Kamala is getting a better handle on her powers, she and Nakia rush to their mosque. After the two girls complain about the condition of the women’s section of the mosque, Kamala tries to convince Nakia to run for the Mosque Board. She immediately objects but after finding that her shoes were stolen she thinks maybe she should. With some more urging from Kamala, she decides she will.

Back home, Kamala apologizes to her mother for sneaking out to AvengerCon before quickly slipping into asking if she can go to Zoe’s party. Her mother agrees to let her go as long as she promises to come back through the front door this time.

Kamala goes with Bruno to the party, where they meet Nakia and Miguel, who is hovering. A guy offers them a drink and Kamala asks if there is alcohol in it. He tells her it’s just orange juice and she takes a sip, immediately cringing from the taste before the boy reveals there’s vodka in it. This moment is lifted right from the comics. 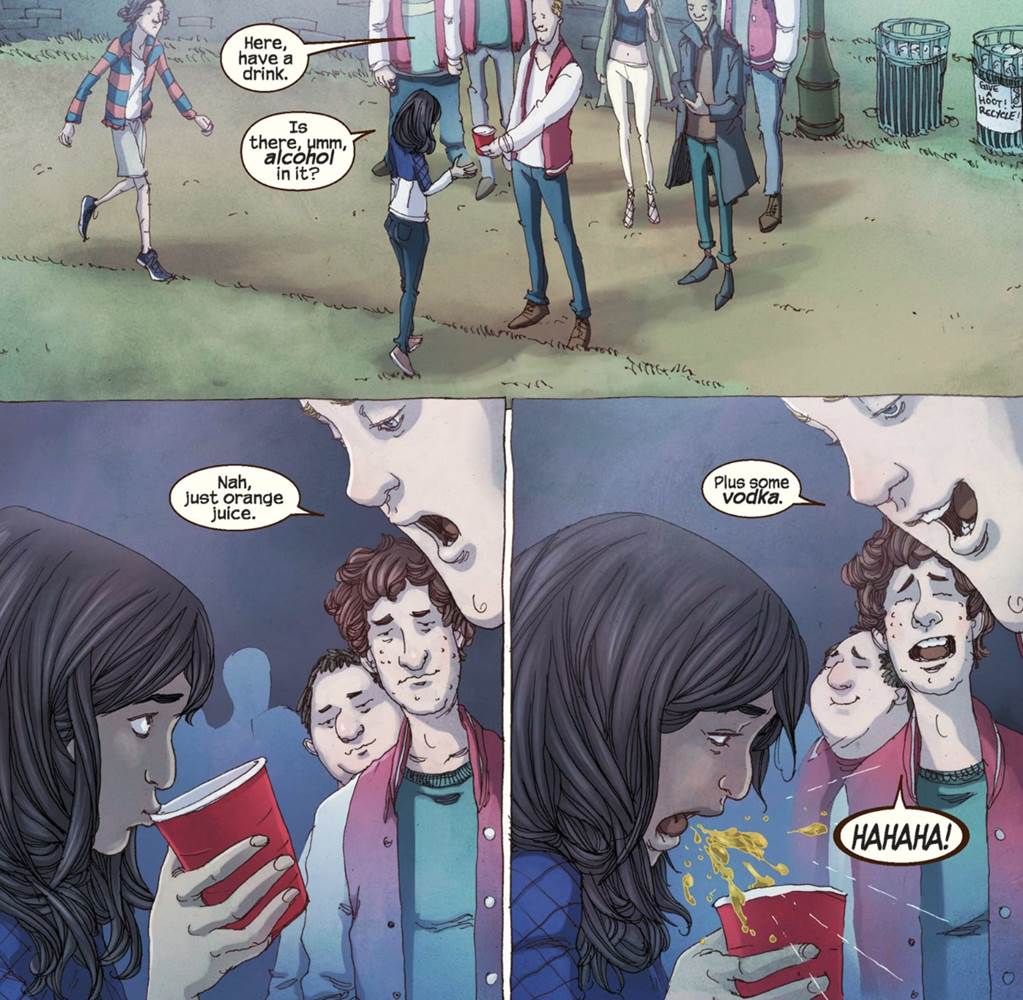 They see the mysterious new guy again and Kamala and Nakia are both instantly taken by him. He introduces himself to them as Kamran. They hear police sirens and everyone panics before Kamran offers to get the group out of there in his car. On their drive, Kamala flirts with Kamran and it’s clear Bruno is becoming jealous. Kamran drops the group off at the Circle Q but before leaving, he gives Kamala his number and offers to give her a driving lesson. Kamala gets home and breaks out into a dance number, clearly in love with Kamran.

At school the next day, Kamala’s hand begins glowing in class and she rushes off to the bathroom. Nakia follows her and tries to help but Kamala keeps her powers a secret from her. Nakia explains the struggles she has been through as a mixed-race teen and the two share a touching moment before Nakia gives Kamala some gifts for her driving lesson with Kamran.

Bruno meets with Mr. Wilson, who informs him that he got into the Early Immersion program at Cal Tech. Bruno is shaken by the opportunity granted to him but he hesitates to accept. Mr. Wilson tries to convince him to take it, but Bruno is still apparently reluctant.

Kamala goes to meet Kamran in the parking lot but is interrupted by Bruno who tries to take her away for training and say he has something to tell her. She explains that she has to go meet Kamran and leaves him behind.

Kamala drives Kamran’s car, poorly, and they stop for lunch. They discuss Bollywood movies and bring up Kingo, a callback to Eternals and Kumail Nanjiani’s character being a Bollywood star.

Kamala’s brother comes into the restaurant and sees her Kamran and naturally has some questions, but Kamala quickly explains that he is their cousin. Aamir eventually buys the lie but it’s clear his fiance doesn’t quite bite and instead understands that Kamala is on a date. 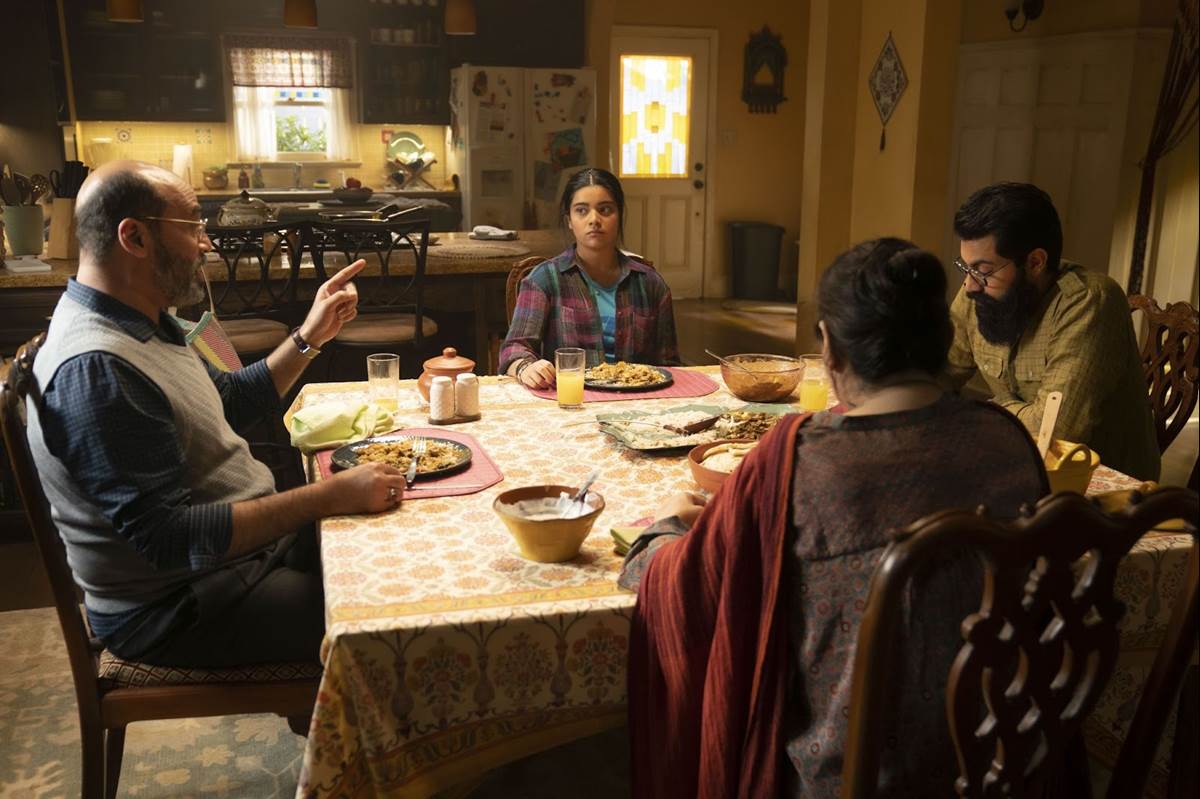 During a family dinner, it becomes clear that Kamala’s mother is avoiding talking about her family and their past. Her father tells a story about one of her relatives who, as a child, got lost but “followed a trail of stars” back to her father. As he tells the story, Kamala’s bangle begins to glow and suddenly a flash of light overtakes her and she sees a woman reaching out to her. Her family then wakes her up after she apparently fainted.

Kamala calls her grandmother and tries to ask about the bangle. She explains that it belonged to Kamala’s great grandmother Aisha, who disappeared on the same night that story took place. She stops herself from saying any more, saying Kamala’s mother would get upset. Kamala asks her mother about Aisha and she does, in fact, get upset and tells her to leave it alone.

Kamala and her family meet with Bruno and Nakia at Eid. Nakia campaigns for the board election and enlists Kamala and Bruno to help. Nakia tries to secure the vote of Kamala’s father who also happens to be the best friend of her competition, putting him in a tough spot.

Agent Cleary interrogates Zoe, in a very similar way he did Ned in Spider-Man: No Way Home. He and another Damage Control agent try to information about this new hero on the scene from her. Zoe doesn’t give them much but they decide to sweep every mosque in New Jersey.

Back at Eid, Kamala tries to get information about her great grandmother from the Illumin-Aunties, which is what they hilariously call the aunties at their mosque. They gossip about what they think they know about Aisha but don’t really give Kamala anything helpful.

A boy falls out of a tower overlooking the celebration and begins screaming for help as he holds on hor his life. Kamala leaps into action, putting on her Captain Marvel cosplay and climbing to the top of the building to try and help. The crowd immediately recognizes her as Night Light.

Kamala tries to calm the boy down as she makes her way to him and she eventually uses her powers to get to him. She barely gets there in time and saves both the boy and herself at the last second by catching them with light. She then leaps onto the roof and hits her best superhero pose before reaching out to help the boy. When she does though, she is interrupted by another vision of the woman, who it seems we can assume is Aisha.

Her powers give out and the boy falls. Kamala tries to reach for him but can’t get him, so instead she shoots platforms of light which the boy hits on his way down, slowing his fall enough for him to survive. However, it’s clear he is injured when he lands and people rush to him.

Kamala, horrified by her mistake, runs off as we hear sirens in the distance. She makes her way to an alley where she is suddenly targeted by a drone, which chases her. She uses her power to take out a second drone but is then surrounded by Damage Control. She uses her powers again to escape them and Kamran arrives just in time to save her. Once she is in his car, a woman greets her form the back seat. She turns to see what appears to be the woman from her visions and Kamran tells her it is his mother.

This episode takes all of that fun energy from last week and multiplies it by 10. Iman Vellani once again crushes as Kamala and now that we get to see her work with her powers a bit, it feels like a superhero show in addition to the hilarious high school comedy it still is. I can’t wait to see where this show goes with these mysterious new characters and what else Kamala is going to get herself into.

You can watch Ms. Marvel on Disney+ now.