Do you know who invented the wheel? Historians have been seeking that answer since the beginning of time, but now we know it was Eureka! In the theme song of the new Disney Junior animated series, which premieres June 22nd, kids are introduced to this awesome prehistoric inventor who lives in a colorful world full of brand-new problems to solve. 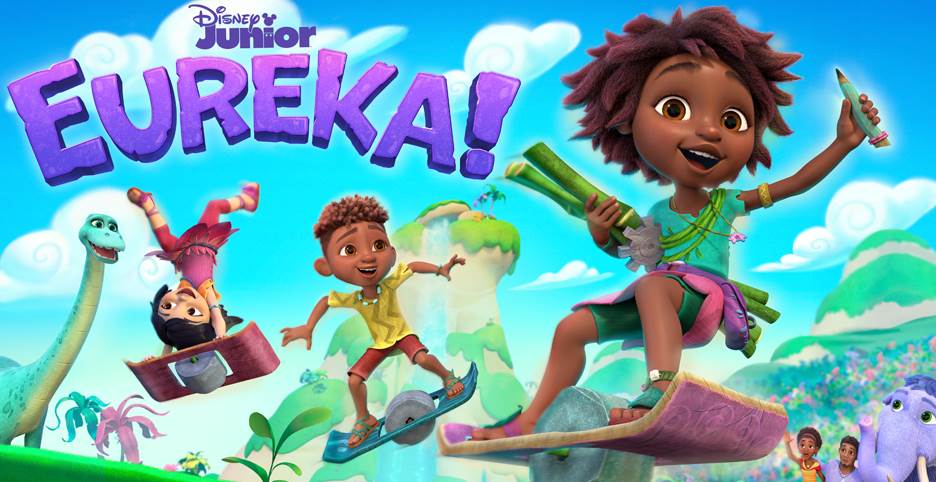 Eureka (voiced by Ruth Righi from Sydney to the Max) is an inventive child who is always looking for ways to make her world a better place. Each music-filled 21-minute episode is split into two 10-minute stories. In the debut episode, titled “Tusks, Trouble and All,” she helps a stuck wooly mammoth and adopts him as a pet, naming him Murphy. But even in the stone age, human houses aren’t exactly friendly places for a wooly mammoth. This story is accompanied by “Absoflutely Fabulous,” which finds Eureka inventing a new musical instrument.

The inventions and gadgets Eureka creates range from practical ones in the real world to fantastical ones designed to enchant viewers. Embedded within these stories is some practical science, such as Eureka designing a lift and pulley system to free Murphy when he’s stuck. There’s also some fun educational opportunities for children watching with a parent over things like a sun dial being used to tell time in Eureka’s outdoor classroom.

Whether through her actions or the songs she sings, Eureka teaches kids to think outside the box to find solutions to problems. In addition to dinosaurs and fun prehistoric animals, Eureka’s world is full of friends that add social lessons for kids through entertaining and engaging stories. There are also fun phrases unique to this world, like “Yes-asaurus” and “Dinolicious.”

Meet Eureka, her friends Barry and Pepper, her parents Roxy and Rollo, and her pet wooly mammoth Murphy in Disney Junior’s Eureka! The series debuts on Wednesday, June 22nd at 7:30 pm ET on Disney Junior and a collection of episodes will also launch that same day on Disney+.