It’s time for another edition of Holey Moley: Fore-Ever! And as usual, we begin with a recap of the events from some of the previous episodes, but mainly the loose Muppet-based storyline as part of Rob Riggle’s attempts to save the show. However, we see a plethora of Miss Piggy in the recap but don’t get too excited since she does not appear at all tonight, as was implied. But remember, Stephen Curry is still being held hostage by Pepe the King Prawn, and Kermit is holding auditions to replace Joe Tessitore on behalf of Rob. Phew. Now that that’s over, lets get back to some extreme mini-golf. Every contestant tonight is a musician in some way, so tonight is the “Night of Music” on Holey Moley: Fore-Ever! And the first hole we see is PoleCano. Michael takes on Nick on this hole, and Nick is a rapper. So get ready for some rapping from Rob, pending he can get his breathing in control. For the first time on the series, both players managed to get their ball in the tiki channel, both landing beautiful tee shots. They both also secure their landing on the pole after being rapid-fired into it, and it is decided that they need to upgrade the hole with live animals in the water, barbed wire on the pole and maybe some electric shocks. Hate to say it, but I kind of agree. Over on the green, Nick misses his putt but Michael makes his and wins the hole. 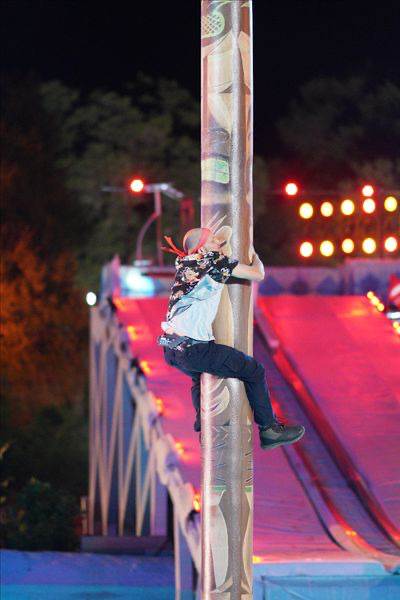 The second hole tonight, appropriately enough, is Hole Number Two where Allie and Kiara must putt alongside a row of outhouses each containing a character ready to emerge. Kiara putts directly into the mucky water and must putt from the drop zone. Her sprint past the outhouse doors didn’t fare much better, and she gets knocked wildly (complete with spin!) into the “substance” below. Allie’s putt makes it to the green but does hit a wall that takes it further from the hole. Her sprint is almost successful but one of the last outhouse doors clips her and sends her into the muck. After a brief commercial break, we wrap up with a summary of putts showcasing that Allie won the hole. 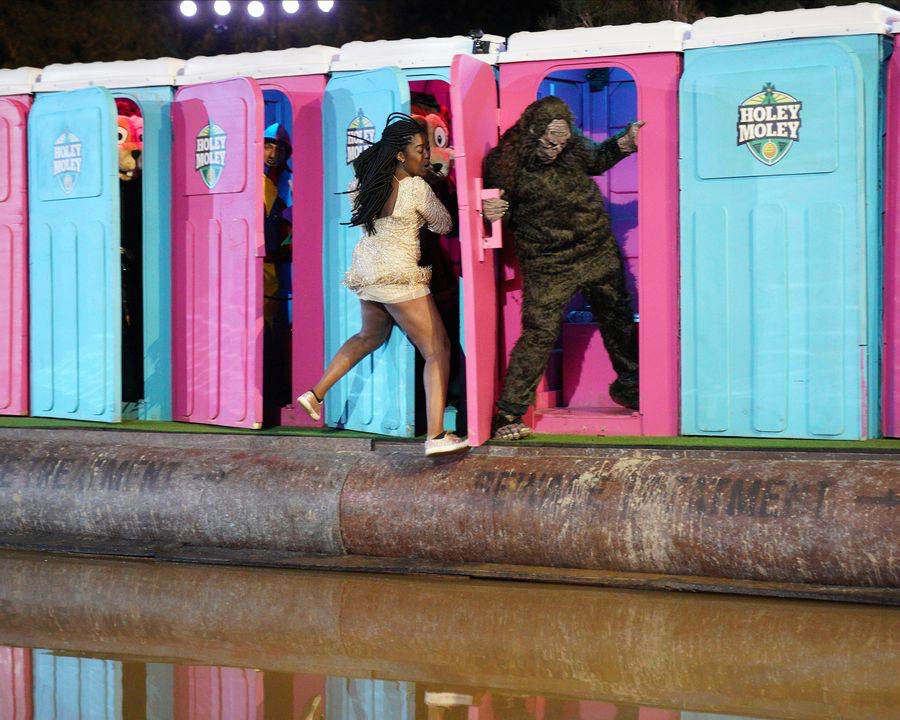 Now, it’s time for The Pecker. Tyler takes on Okky (as in Okky Dokie) when facing the giant bird. Tyler misses the good channel that will almost secure a spot next to the hole, but his lesser channel has actually knocked him into a good spot and just misses a hole in one. His jump gets him a good grip on The Pecker, but he fails to move forward to get the feather and falls into the pit below. Okky also misses the good channel and ends up less fortunate than Tyler, getting the big kick to the right and is quite far from the tee. However, Okky has skills when it comes to the jump, and he lands beautifully on the Pecker, securing the feather and sparing himself the stroke penalty. However, he is so far he has to use that extra stroke and still misses, with Tyler making his substantially closer shot and moves on. Now, for another audition featuring a Muppet who could replace Joe, we see an awfully terrible read from Bobo the Bear. Let’s just get back to the mini-golf, and my personal favorite hole in the series, The Distractor. Emily is with Beth as the wall rotates to reveal world championship level whip crackers. The loud cracking seems to have no effect on Emily, who secures her putt on the first try, but Beth seems to be, well, distracted, by the cracking and misses, giving Emily the win. Surprisingly, we are treated to another Muppet audition, this time Joe from Legal auditioning for Joe Tessitore’s spot. Get ready for a lot of law puns and jokes surrounding the name Joe, as well as an appearance from Statler and Waldorf. Eventually, we hear Kermit say that he gives up since Joe is irreplaceable. Is this the last audition? 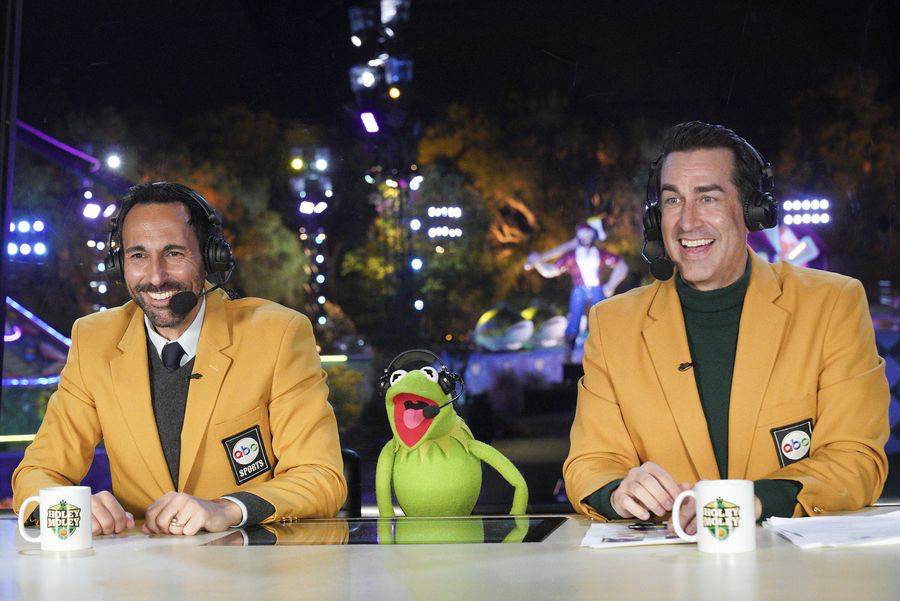 For the first time this season, Kermit actually joins Rob and Joe in the booth and offers up some of his own commentary on the fun, staying for the first hole of the second round, Full Mooney, with Allie and Michael. Rob nicknames Kermit the “Lean Mean Green Machine” which Kermit asks to be shown in the lower third, which we get. Michael lands his putt about two feet from the hole, and climbs onto the orbiting moon before falling off fairly quickly. When asked if Kermit has ever mooned anybody, it was determined that yes he has considering he is almost always naked.

Allie shoots her shot (way too hard) and hits the backstop bouncing back across the green and landing in the sand. Kermit, offering up some of his brand of humor, mentions that it's not that easy making it to the green. Allie falls into the water as well, and despite her best efforts bringing her ball closer to the hole, Michael was already there and secures the win with his easy putt. 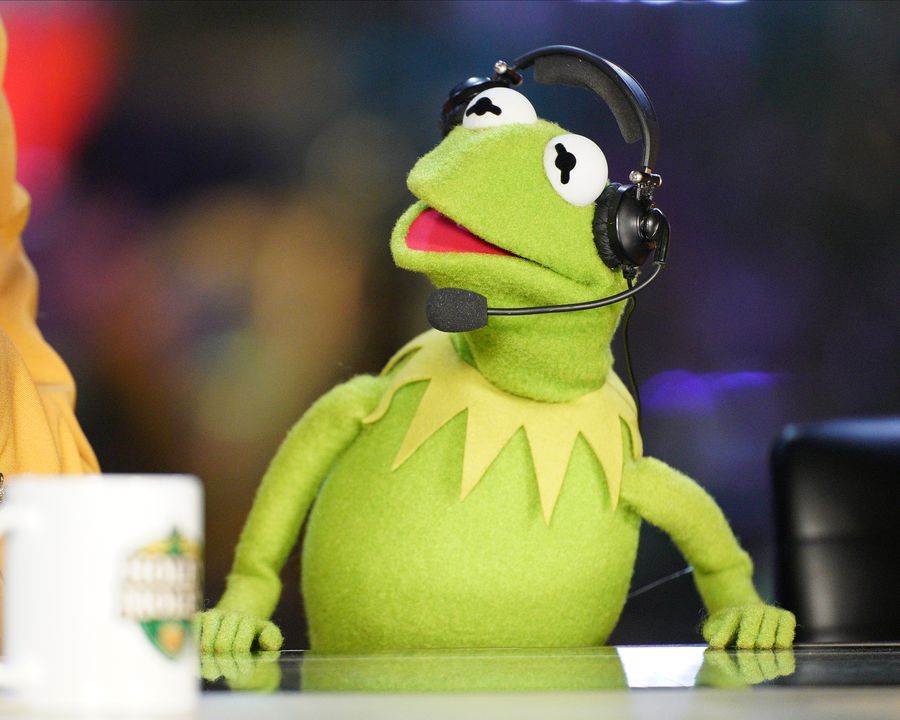 The second half of round two takes us to Holeywood, where Emily and Tyler are going head to head for the last spot in the final round. Tyler runs off the accelerated red carpet and splits himself, in a rather unfortunate position onto one of the lily pads, but since he ended up in the water in some way, he has to drop from the Rob Riggle drop zone, the worst position to be in on this hole. Emily also lands terribly, almost doing a pencil dive from the red carpet and goes face first into the side of the lily pad in a landing so rough that even Rob and Joe were concerned. A good putt by Emily puts her closer to the hole than Tyler, and the pair both make their shots forcing a putt-off. Tyler makes it, but Emily misses, doing a ring around the hole before spinning out. 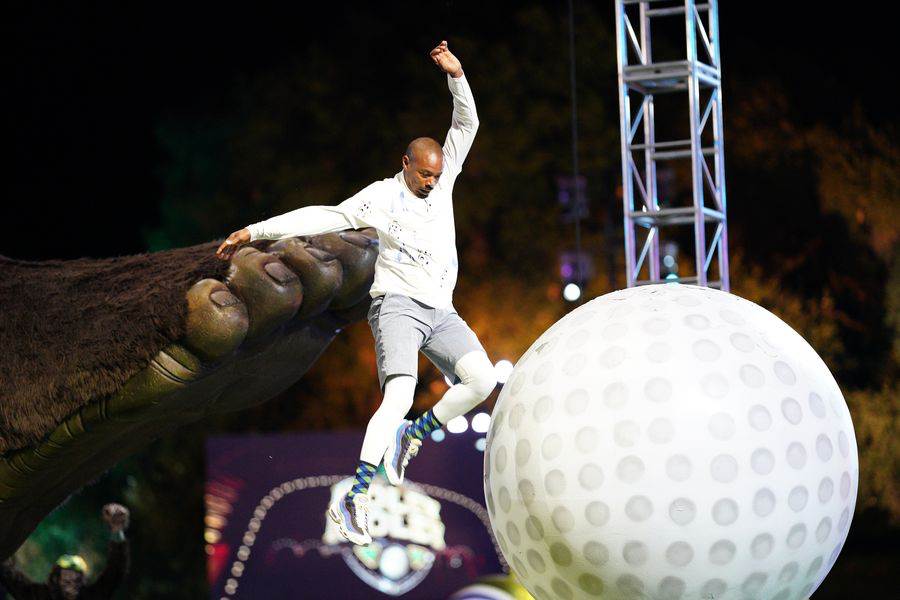 Tonight’s final takes place over at one of this season’s new holes, Bigfoot Wedge, with Tyler and Michael. Tyler’s putt heads down the ramp and lands only about two feet from the hole, and while his jump from Bigfoot’s foot to the golf ball landing pad did look promising, it was grossly overpowered and he found himself almost launching clearly over it. Michael’s putt took him further from the hole, and his jump off Bigfoot’s foot wasn’t much better, but he went wildly to the side, not even close to the golf ball landing pad and missing it entirely. His second putt was much better, but tragically just misses the hole, and sinks the ball on his fourth shot. Tyler, who was much closer, made his shot in three, securing the win, the plaid jacket, the golden putter, and the chance at $250,000. 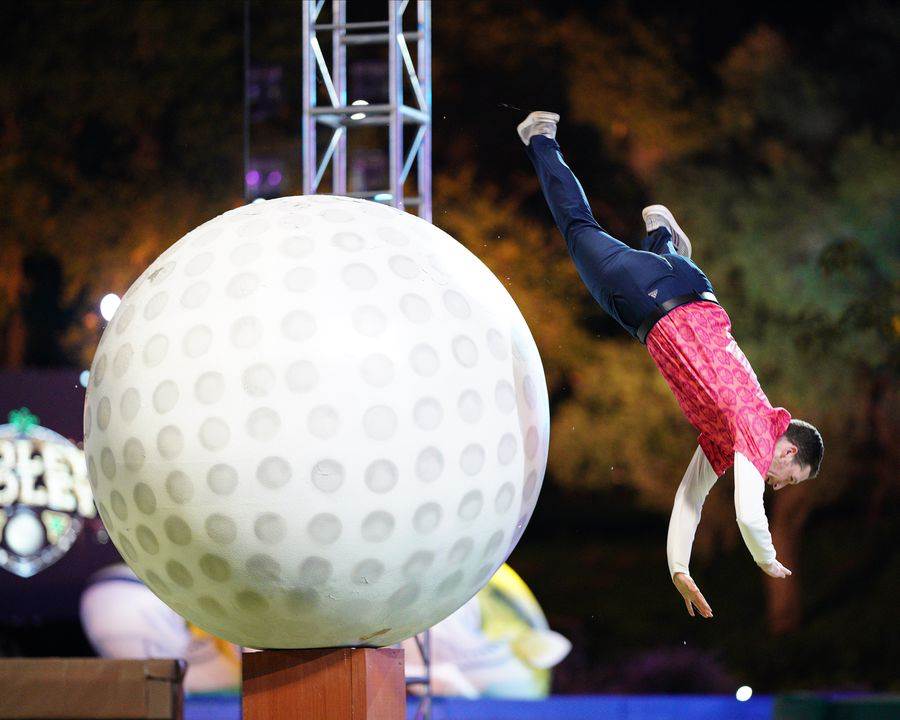 Tyler is seen at the clubhouse with his plaid jacket, golden putter, and once again with the “real” Stephen Curry, which is starting to become more noticeable and even Joe is making comments. 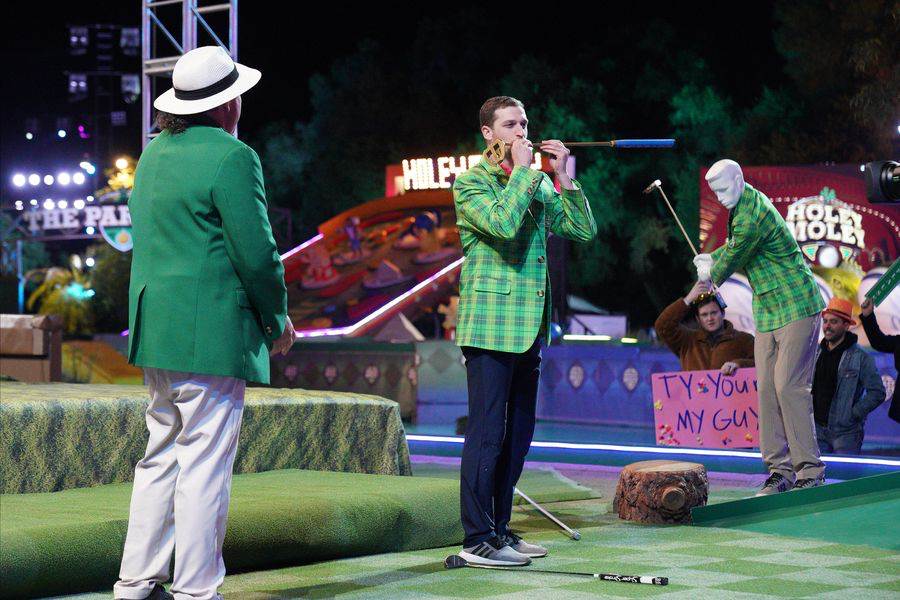 Holey Moley: Fore-Ever! Airs Tuesdays at 8:00 on ABC, and is available next day on Hulu.