Riley Oh is back, and in the latest tale from Graci Kim and Rick Riordan Presents, the world has changed greatly for her. In the newest installment of the ‘Gifted Clans’ saga, The Last Fallen Moon picks up from where readers left off with Riley and how she deals with the fallout from the previous book. 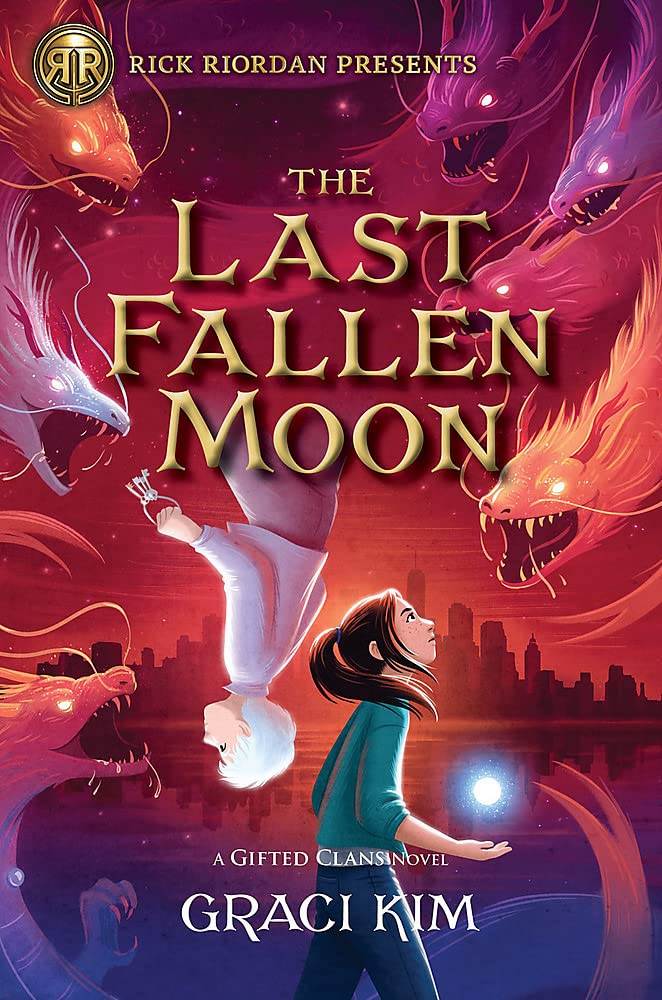 The community is in chaos as the Gom clan has lost their patron goddess. Without a god, the members have lost their magic. Riley’s parents are cut off from their healing abilities and have been forced to take a job cleaning up at a local restaurant to support the kids. Riley is blamed by many in the community for this loss. Hattie, Riley’s sister, occasionally falls into a coma because of events from the previous book. To make matters worse, as Riley tries to process what she has experienced and what is happening in her life, – no one can remember her. She gave away those memories as part of a deal to defeat the Cave Bear Goddess.

Riley has always had an insecurity about her place in the community. She has been riddled with doubt, and always felt like an outsider. This insecurity led to her complaining and getting upset about many things, but in The Last Fallen Moon, we meet a different Riley. Still blaming herself for everything that has gone wrong, Riley concocts a scheme that endangers her life. Journeying to the Spiritrealm to find a new patron god is not an easy task, but Riley hopes that this quest will restore the clan magic and save her sister Hattie.

Worried about all the trouble she has caused and not wanting to hurt anyone else, Riley sets off on this journey alone. It will take a dangerous trip through the depths of hell for Riley to realize that she needs her friends and family more than ever. Even though they don’t remember her, everyone wants to help.

Graci Kim has developed a thrilling and emotionally packed follow up which allows her main character to grow exponentially. Taking Riley out of her comfort zone by forcing her to endure her own odyssey to save her family, makes the reader empathize and connect with Riley more.

When we first meet Riley in The Last Fallen Star, she is unsure of herself, and often panics. Riley was a mess of emotion that resulted in her crying on many occasions. In The Last Fallen Moon, Riley is a different kid, who believes in her own ability, and has a strong desire to fix the mistakes she made. While she is not responsible for everything that has happened, her love for her family has forced her to confront her fears which necessitates her to travel to hell and back.

It's a big risk to upend your main character and move them into a new setting for the second book in the series, but Graci Kim has brilliantly chosen to take a new road in the life of her series.

There is no fire and brimstone in the hell of The Last Fallen Moon. Of course, the Spiritrealm would be dominated by new initiatives that are led by politicians trying to make the voters happy. Torture is a thing of the past, which has given way to a place where souls have a chance to make amends for their actions in life.

It is here on the quest that we meet the two newest and most important characters of The Last Fallen Moon. Saint Heo Jun is Riley’s target, as she hopes he will take on the role of patron god of her clan. This affable and loveable healer is the perfect candidate for a replacement deity, but something is rotten in the state of hell. The spirits have been sickened, and there is danger afoot.

For all the warmth and care that comes from Saint Heo Jun, the true heart of the book is Dahl – tour guide in the afterlife, and spiritual twin to Riley. Dahl is unlike any other supporting character we have seen. He is confident, smart, hopeful, doubtful, and kind. Dahl is the kind of person you want to meet as you make your way through the gates of hell. Partnered with Riley, we see the effect each has on the other, and the buddy comedy that results from these two is worth the price of the book alone.

The Last Fallen Moon carries on the story from the first book, but also stands out as a solo tale that has a clear beginning, middle, and end. Readers could start here and begin Riley’s story. Or they could stop here and feel content with the journey they took.

As readers close the book on this latest entry from Rick Riordan Presents, the lessons of Kim’s book are simple. Everyone needs a family and friends, and we should all learn to trust those who are offering their help. Change is not something to fear either. In fact, change can be an adventure, should one let it become that.

While the lessons of The Last Fallen Moon are practical and applicable to our daily lives, this is part of a bigger narrative, and there are more than enough tidbits of what is to come in future books that will place Riley, her family, and friends in more danger to come.

Categorized as a Middle Grade novel, The Last Fallen Moon is an adventure that everyone will want to experience.