Marvel Studios held the world premiere of Thor: Love and Thunder tonight at Disney’s El Capitan Theatre in Hollywood and now that the first audience has seen the film, social reactions are beginning to pour in. Reviews are under embargo until July 5th, but our roundup of social reactions gives an early indication at what the critics are saying. “Nonstop ridiculous fun,” says Laughing Place’s own Marvel expert Mike Mack.

#ThorLoveAndThunder is nonstop ridiculous fun! It’s hilarious and action-packed and just a totally crazy theatrical experience. The phenomenal cast does an outstanding job and this movie packs a few surprises. Definitely don’t miss this one! pic.twitter.com/VwU24rY0ef

Do you have an “appetite for destruction and laughs?” If so, Courtney Howard suggests you’ll leave the theater with a full tummy.

“Funny AF” but also “heartfelt and emotional” sounds like a winning combo.

#ThorLoveAndThunder is everything you love about a Taika Waititi movie and more. It's HILARIOUS (seriously it's funny AF) but it's also heartfelt and emotional. Everyone brings their A-game. pic.twitter.com/I4ICLF3ZTD

Kristin Acuna of Insider ranks it as her third favorite film from Phase 4 behind Shang-Chi and the Legend of the Ten Rings and Spider-Man: No Way Home.

Wow!! #ThorLoveandThunder is great! The best entry in Phase 4 behind Shang-Chi and No Way Home. I laughed. I cried. Then I laughed and cried some more, in that order. Natalie Portman is FINALLY given her due. Dr. Jane Foster is more than worthy of being the Mighty Thor.⚡️ pic.twitter.com/oOop89P1uf

Fans of The Mighty Thor comic series should go home happy according to Brian Particelli of TooFab.

#ThorLoveAndThunder is a solid take on the Mighty Thor comics — it’s great to see Natalie wield the hammer and all that comes with it. Christian Bale is a top tier MCU villain and Chris/Tessa are great as always. Another Taika win with humor, heart & a can’t miss credits reveal. pic.twitter.com/BGkXgCEyV9

“Largely self-contained,” says Joey Magidson of Awards Radar, meaning you don’t need to have seen all of the previous MCU films to enjoy the show.

THOR: LOVE AND THUNDER is epic!!

• Bale is BRILLIANT. He’s horrifying, and a stunning addition to the MCU

• The Goats are my everything

More thoughts later, but I hope everyone loves it!!

Max Joseph sings the praises of the goats.

Thor: Love and Thunder is a fun, tight, and largely self contained Marvel adventure. If not quite as much of a surprise as Ragnarok, this is more evidence that Taika Waititi knows how to make Thor a blast. Heart/humor mix again to make for a real good time. #ThorLoveAndThunder pic.twitter.com/Bkxn5HJFQe

Be advised, there is a “butt reveal” and we don’t know whose it is (or if a double was used).

#ThorLoveAndThunder is very Taika. Like Ragnarok, plenty of laughs and silliness, but expect the unexpected. Christian Bale as Gorr is terrifying, Korg’s an A+ storyteller, rockin’ soundtrack & don’t choke on your popcorn during the butt reveal. Those end credit scenes! 😮🥺 pic.twitter.com/Y3ZXSKMxHl

While some are calling Thor: Love and Thunder Marvel’s funniest film, others disagree.

I saw #ThorLoveAndThunder. It can't quite match the visual or comedy bombast of Ragnarok, but Taika Waititi makes up for it with an emotionally mature Marvel movie. It's also very funny (Natalie's got jokes) and features one of the most stunning visual sequences in MCU history.

The film met Erik Davis’ expectations, who calls out performances from Christian Bale and Russell Crowe (and Korg, played by director Taika Waititi!).

Another classic Thor adventure! #ThorLoveAndThunder is everything I wanted it to be. Big, colorful, weird Guns N' Roses-fueled battles to go w/ a hopelessly romantic story about discovering love in unexpected places. Christian Bale & Russell Crowe are especially great. And Korg! pic.twitter.com/fu0gTUuMRj

Muses of Media suggests the film may have some pacing issues, but calls out the action sequences as a strength alongside acting performances from Tessa Thompson and Natalie Portman.

#ThorLoveAndThunder has highs and lows but doesn't scale back on the action. It has great fight scenes and chemistry between the actors has never been better.

Tessa Thompson as Valkyrie and Natalie Portman's return as Jane Foster are the standouts. ⚡️ pic.twitter.com/g3pNc5mbdp

#ThorLoveAndThunder is the funniest film in the MCU. The jokes are excellent as is the cast delivering them.

BUT, the plot felt flat and stakeless. Not sure if that's a #Thor problem or an MCU-without-a-big-bad problem. pic.twitter.com/G6XP9EyL0Y

Jeff Zhang at Strange Harbors, who has been underwhelmed with Phase 4 of the MCU, calls Thor: Love and Thunder a “Bright spot” while describing the villain as “Undercooked.”

#ThorLoveAndThunder is a bright spot in a wobbly Phase 4 as Ragnarok redux, down to its goofy lark humor and its undercooked A-list star as villain. Unconcerned with cameos and fan service, it feels like a tonic. Much better/funnier than the sum of its unimpressive marketing. pic.twitter.com/hwTLk8Chhs

Contrarily, Simon Thompson says “Gorr is a killer boogeyman blending the campy and the creepy.”

#ThorLoveAndThunder is a vivid and vibrant blast that delivers. Hemsworth’s Thor remains a jewel in Marvel’s crown. Bale’s Gorr is a killer boogeyman blending the campy and the creepy. Portman’s Foster and Thompson’s Valkyrie are a top notch pairing. Crowe’s Zeus is *chef’s kiss* pic.twitter.com/PDb5SZRWOo

Gorr also comes with a side of Penguin from Batman Returns.

If you, like me, take delight in watching Christian Bale slurp up the scenery while gobbing out that black ink Danny DeVito had in Batman Returns, then #ThorLoveAndThunder is for you.

Speculations are now underway about what Thor: Love and Thunder could mean for the next phase of the MCU.

#ThorLoveAndThunder is the most @TaikaWaititi @MarvelStudios movie to date. Filled with his trademark fun and random funny, though it doesn’t hit its emotion core until the ending. It all only hints that Phase 5 will take us to very mythological MCU

The consensus seems to be that if you’re a fan of Thor: Ragnarok, you’ll also be a fan of Thor: Love and Thunder. If not, there’s always another MCU project just around the corner.

#ThorLoveAndThunder is very much the successor of 'Thor: Ragnorak', which I was not over the moon for. While it has its fun moments, the imbalanced tone did not work for me.

Certain *choices* left me disappointed, especially in regards to the characters in the film. pic.twitter.com/Fe21sW8C0N

As always, stay through the credits.

#ThorLoveAndThunder has two after credit scenes. But that’s all you’re getting from me. As always, expect plenty of surprises. Especially at the very end. 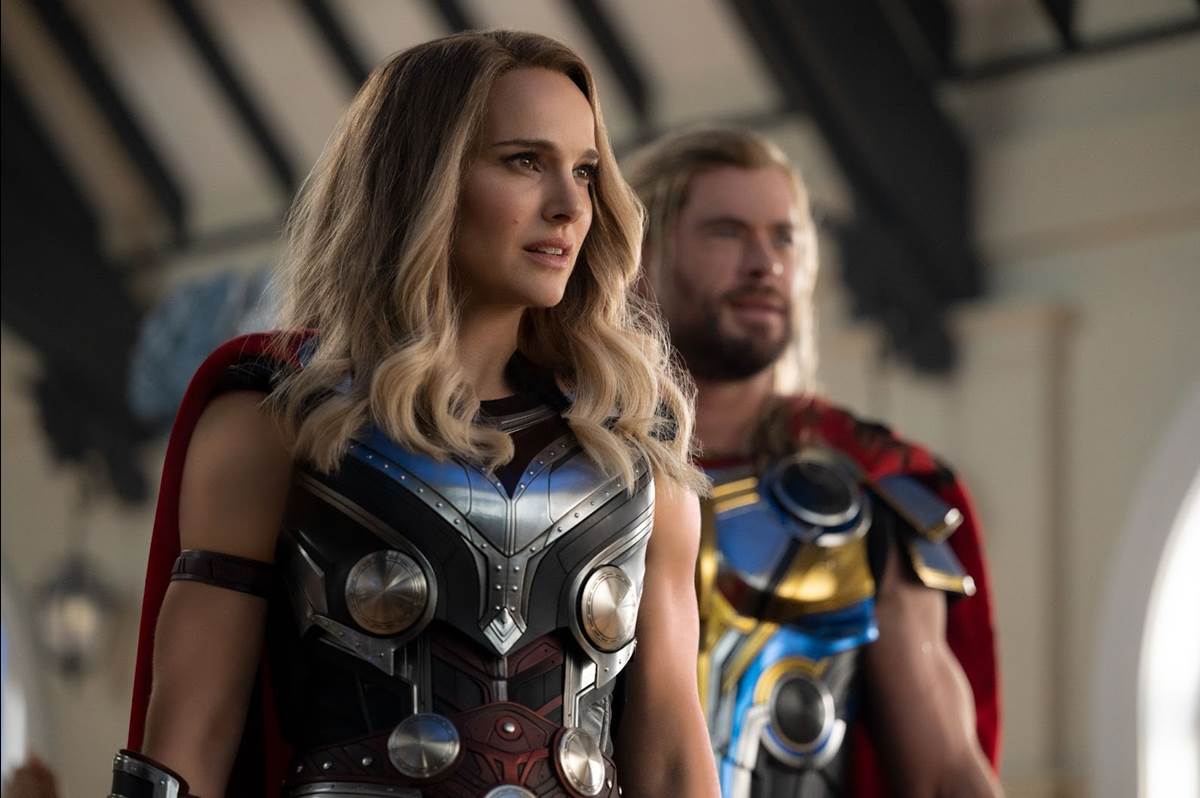