Asgard has been the focal point of a lot of great Marvel stories, not just in comics but in the Marvel Cinematic Universe as well. But while Marvel fans await the latest addition to the Thor film franchise, they can also check out a novel focusing on some of Asgards lesser known characters.

Three Swords: A Marvel Legends of Asgard Novel from Aconyte books and author C.L. Werner is an action-packed fantasy story featuring the Warriors Three. These characters have been around in the comics for decades and even made appearances in the MCU, but they still haven’t had much time in the spotlight, until now.

This novel, is nothing short of bizarre. While the Warriors Three can be interesting characters, this story drops them into some very strange environments that take them way out of their element. It’s also a shame that – while Fandral, Volstagg and Hogun are great – the undoubted most interesting character of Thor’s group of friends, Lady Sif, is not one of the main players in this book.

Still, we do get some great character moments from the Warriors Three. Fandral, in particular, stands out as the character with whom the reader can really connect. The charm of the character is really allowed to come through in some pages and there is a fun new connection to Robin Hood for the character.

Volstagg, as usual, provides the comic relief throughout the story while also being the muscle for the Warriors Three. His banter with his running mates is what keeps the reader engaged with these characters in a lot of cases. Hogun, on the other hand, is the brooding counterpoint to Volstagg, providing the balance the group needs. 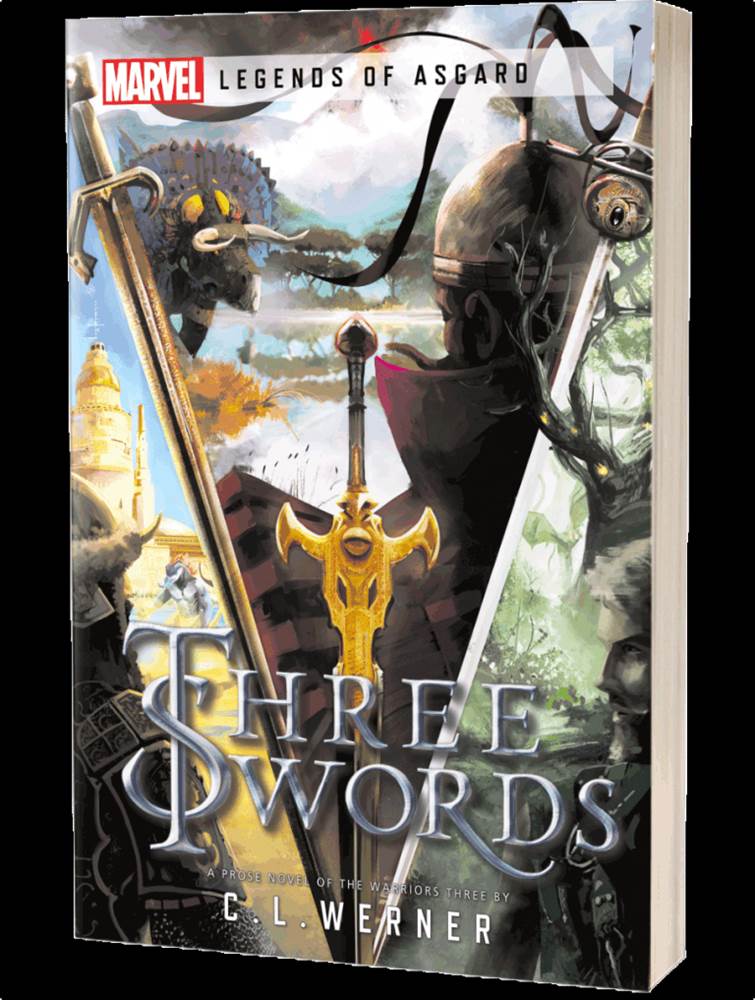 It’s not the characters that really get shine in this book though, it’s the action. And the action is really nonstop. The whole novel is really just the Warriors Three going from one fight to the next, with pages upon pages dedicated to description of sword swinging, arrow shooting and skull cracking. If you like your novels to be so heavily focused on action, this is the book for you. It’s hard to imagine though that this wouldn’t have been better suited as a comic.

The action also greatly takes the heroes out of their typical Asgardian element. The story sees the Warriors Three tasked with hunting down three enchanters, which takes them to all kinds of crazy locations. While we’re accustomed to seeing these heroes face off with Asgard’s enemies like Frost Giants and Dark Elves, we’re not accustomed to seeing them take on humanoid lizard creatures or dinosaurs. This story really takes some very strange turns.

Overall, Three Swords: A Marvel Legends of Asgard Novel is a very action heavy story with some less-than-popular characters at its core. The Warriors Three can certainly carry a story, but this one focuses much more on the really wild fantasy and sic-fi elements and nonstop fighting more than it does on the characters themselves. If you’re someone who prefers your Marvel stories to focus on the action, this might just be your favorite of the Aconyte Marvel novels.

Three Swords: A Marvel Legends of Asgard Novel is available now. You can order your copy here.