Last week, Kamala learned a little bit about her bangle and her past when she was introduced to the Clandestines and learned that she is a Djinn. After a vision of a train led to her grandmother telling her she needs to come to Karachi for more answers, it became clear that these new powers were going to lead to something much bigger for Kamala. 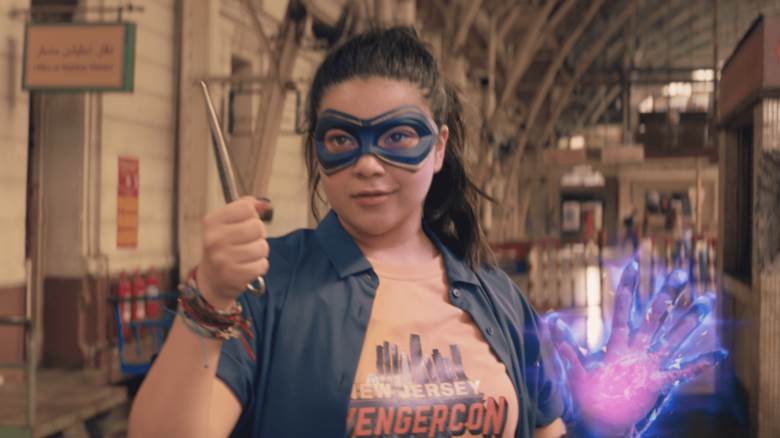 The episode opens on a plane and we quickly learn that Kamala is on her way to Pakistan. Before we can wonder how her parents would allow that, we see that her mother is on the plane with her as they both head to visit Kamala’s grandmother. They agree to a temporary truce while visiting Karachi, though her other is still upset with her for ruining her brother’s wedding. Kamala tries to text Nakia and we see that her friend has been ignoring her.

When they arrive in Karachi, they are greeted by two of Kamala’s cousins, Zainab and Owais. Her grandmother arrives shortly after, joking that she was just coming from a party. Kamala’s mother and grandmother share an embrace despite their clearly strained relationship.

When they get to her grandmother’s house, Kamala discovers an art studio and that her grandmother was an artist. She shows Kamala a picture of Aisha which prompts Kamala to seek answers on the bangle. She is very casual about the fact the they are Djinn, saying “it’s just genetics” (or Djinn-etics, get it?). She also confirms for Kamala that the train they saw in their vision is the same one that she got on as a child to leave India and come to Karachi. She tells Kamala the bangle is trying to tell her something.

Trying to sleep, Kamala has nightmares about the Clandestines attacking her and Nakia being angry with her. She is woken up by her cousins and urged by her mother to socialize. Kamala, her mother and her cousins go to lunch where they are forced to eat outside because Kamala wore jeans and broke the dress code. Her mother’s friend arrives to join them and reveals that Muneeba has always been a bit of a rebel, surprising Kamala.

Zainab and Owais show Kamala around the city before separating to meet some friends. Kamala tells them she’s going to check out the train station and goes off on her own. While exploring an area of the station that is blocked off, Kamala puts on the mask Bruno sent her. While she admires a mural of Ant-Man, a dagger flies into the wall in front of her. A man then drops in, with a red scarf covering his face, and reveals that he has been following Kamala. The look is instantly familiar to comic fans as this is the Red Dagger, a superhero who operates in Pakistan and also happens to be Kamala’s cousin. Though, the latter appears to have been changed for the series.

The two spar a bit, testing each other’s abilities without really looking to hurt their opponent. Red Dagger points out that Kamala is wearing an AvengerCon shirt that says New Jersey, allowing him to identify her as American. He also tells her the Noor called to him, allowing him to find her, and reveals that he knows about the Clandestines and Aisha. When their fight draws some attention, they head off to somewhere they can speak more privately. 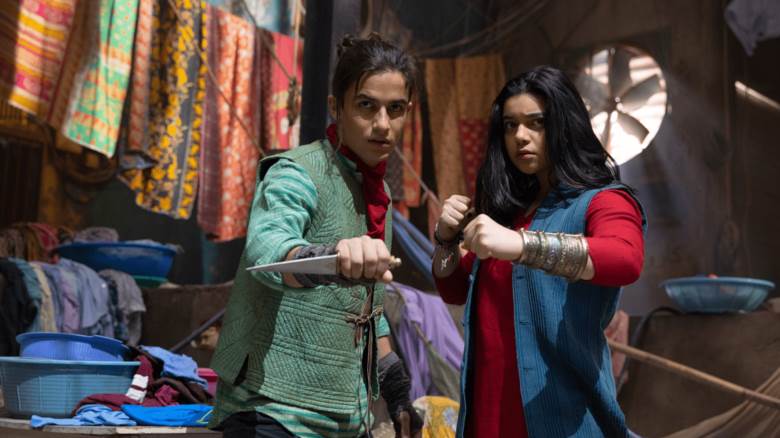 Red Dagger leads Kamala to a hidden base inside a restaurant and welcomes her to the “Red Daggers,” again slightly changing the character. In this secret base of operations, Kamala is introduced to Waleed, who explains to her that if the Clandestines are able to use the bangle to open a portal to their realm, it would destroy our world. Waleed also translates an inscription on the bangle, “What you seek is seeking you.”

At the DODC supermax prison, the Clandestines fight back against the guards and manage to escape but not before Kamran is injured. Najma orders the rest of the Clandestines to leave him behind, saying he has made his choice. They hesitate momentarily, but leave him behind. It’s unclear what Kamran is going to do from there, but it looks like he will head off on his own.

Back at the house, Kamala meets with her grandmother again to try and figure things out. Her grandmother explains that she doesn’t really know her own identity, being from so many different places. Kamala receives a text from Kareem, the Red Dagger, and she goes to meet him. Together, they meet some of Kareem’s friends on a beach and enjoy a meal.

Muneeba and her mother discuss their past and relationship. Muneeba explains that she was never trying to get away from her but she needed a change and moved to America to find it. She complains about the crazy stories her mother would tell, like the one about her following a trail of stars to find her father on the train. Later, Kamala returns to the house and finds her mother eating toffee at the table and joins her, sharing a moment that patches up their relationship a bit.

Kamala returns to the Red Daggers, where Waleed explains that Kamala’s genetics are allowing her to use the Noor. He gives her a blue fabric, slowly piecing together the familiar Ms. Marvel costume. The moment is interrupted when the Clandestines drop in and attack Kamala and the Red Daggers. They escape but are chased out into the city. Eventually, Waleed splits off and tries to buy the others some time. He finds himself in a fight with Najma and, while he can hold his own, he turns his attention to Kamala and Kareem, to save them from one of the other Clandestines. Najma seizes her opportunity and stabs Waleed, seemingly killing him.

Kamala and Kareem find themselves cornered and are forced to fight the Clandestines. Eventually, Najma hits the bangle, causing an explosion of Noor that blasts Kamala into another vision. This time it’s the train station on the night of partition, with people scrambling to get on the trains out of India. This vision is different from previous ones in that Kamala is actually in it, rather than just seeing it. She climbs to the top of a train to see that it is hundreds of people trying to get on these trains as the episode comes to a close.

Things ramp up quite quickly in this episode. In fact, it feels as though this part of the story could have benefited form being spread across two episodes, as we meet and seemingly lose Waleed in a matter of minutes. Still, it’s just as fun as previous episodes and the series is starting to include much more action than the early episodes did. It’s clear we’re gearing up for an action-packed finale in just a couple of weeks.