After a brief break thanks to…I think it was Basketball… Holey Moley: Fore-Ever! Has returned this week bringing us the same antics and fun we’ve come to expect from ABC’s extreme mini-golf challenge. 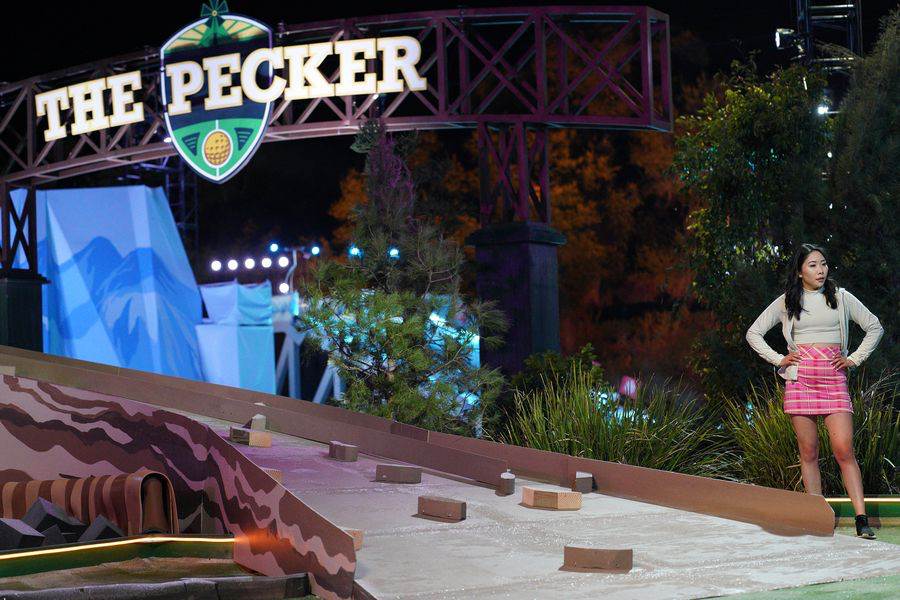 A quick recap reminds us that Riggle is flattering Miss Piggy to get her to help put a whole finale together to help get the series renewed. Now, it’s on to the game at hand, and a quick spot for Riggle’s All Beef Nacho Pickles. This episode is the last episode before the season finale, and the winner will join the winners from the previous episodes of the season in the next episode. First, it’s Mark vs. Thang on the classic hole, Dutch Courage en Fuego. Mark’s putt rolls back and he takes a casual stroll into the blades of the windmill and gets knocked violently into the water. Thang has a terrible putt not even getting past the first windmill, but makes it all the way through himself before taking the strangest putting stance we’ve seen yet to get to the green. Mark, the namesake of the episode “Is This Guy Weird?” puts his evil mojo on Thang, and secures the win moving on to the next round. Hole #2 tonight? King Parthur’s Court. Kate and Joe get to face the knight, who is from a ren faire and will be out of a job if he loses, according to resident golf pro, Steph Curry. Kate makes her putt and takes an awkward bounce landing in the worst position we’ve ever seen on this hole. Kate tacks the hit from Sir Putts a Lot and just lazily falls off the horse as she tipped back into the water. Joe has a far better tee shot —- but what comes of his joust, we don’t know as we go to a commercial break. For Boca Raton!! Joe takes on Sir Putts A Lot and gets knocked off the horse aggressively. Kate and Joe both miss their second putts and end up in a putt-off. The distaste for Joe from Kate is very evident during the putt-off, but Joe secures the win, with an annoyed Course Marshall Joe even expressing his displeasure. 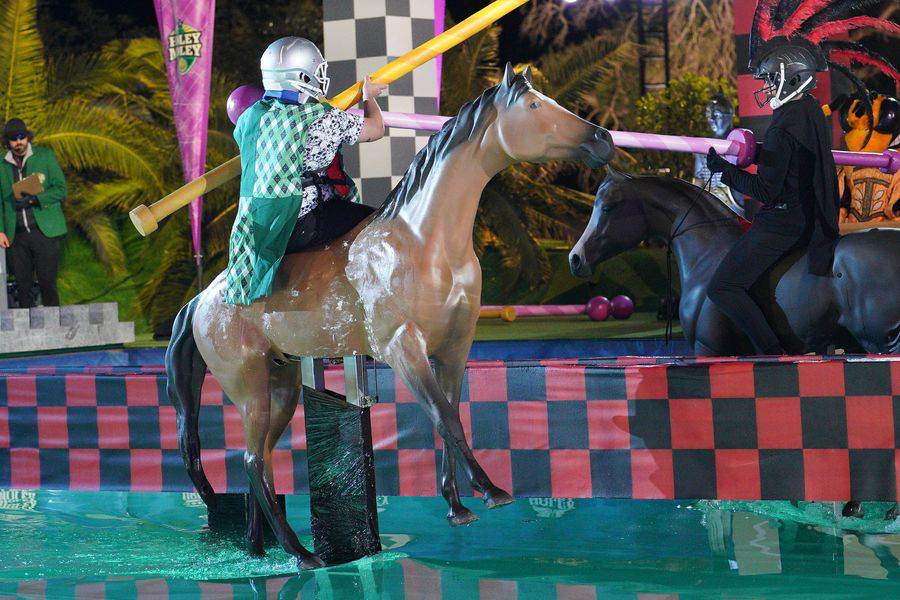 Erika and Nathan are heading over to Donut Hole. Erika has a decent placement on the green after her putt but has a terrible performance jumping into the first donut and bouncing back into the sprinkles below. Nate’s donut attempt got him to the second donut before a spectacular failure where he found himself in the sprinkles as well. Erika’s winning putt was the real showstopper as her golf ball sat on the edge of the hole and waited before dropping in the hole, securing her spot in round two. Over to Hole Number Two with Nicole and Michelle. Nicole has a pretty good putt but she had a very rough start to her sprint past the doors, not making it far before getting knocked into the water. Michelle’s put almost made it to the end and went into the water. Conveniently, that’s about how her sprint went as well, getting almost there and getting knocked violently into the air with great distance landing about where her ball landed. Nicole’s second putt misses the hole, and she keeps missing, giving the chance for Michelle to come in and win. Michelle pulls the upset, and moves on to round number two. 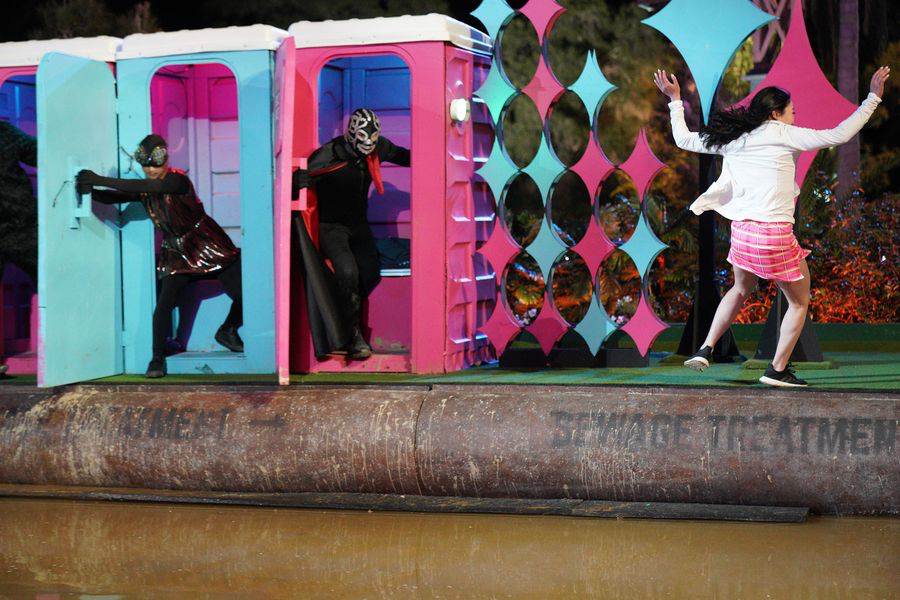 I’d forgotten, but here comes another Rob with the Muppets segment. Rob is courting Miss Piggy with chocolates and confesses his undying love for Miss Piggy, but seems to ruin everything by trying to eat one of the raspberry chocolates from his gift. Round Two kicks off with my favorite hole in the series, The Distractor. Weird Mark and Erika await their distraction, which appears to be a bagpipe player and the fly we’ve seen at Hole Number Two. The distraction must be the curiosity of why these two are appearing together. Weird Mark is doing his voodoo to Erika even though she appears incredibly focused, but just misses the putt. Mark is yelling at himself but he too misses the putt while Rob and Joe are making fly puns in the booth. Erika makes her second putt, but Mark still has the chance to match, which he does not, giving Erika the spot in the final round. 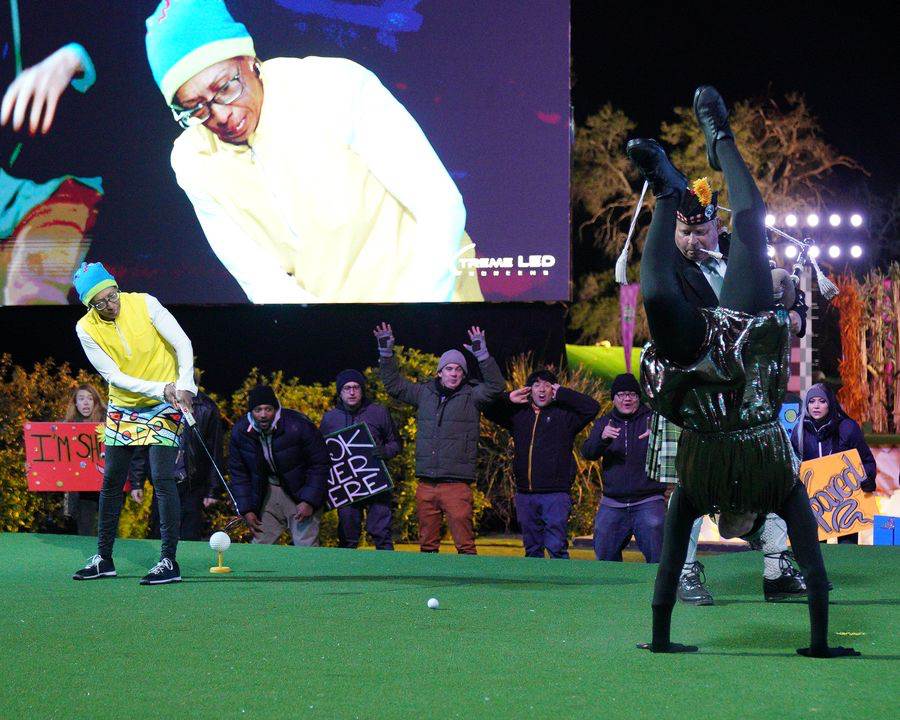 And now, Rob’s plan to save Holey Moley continues, with him pulling an 80s movie style way of winning Miss Piggy over outside her trailer window. The second half of round two takes place on The Pecker, with Boca Joe (who nobody seems to like) and Michelle. Michelle lands in the preferred channel and gets kicked to the other side of the green far away from the hole. Her jumping effort is fantastic but she inevitably fell off the side of the bird’s head. Joe also hits the channel and luck favors him landing very near the hole. “Oh God,” as he face plants directly into the bird’s head and bounces off and back into the pit below. Michelle had a great recovery putt, but didn’t land it with Joe taking the win and moving to the final round. The final round is Erika vs. Boca Joe and it's sure to be disastrous as they take on The Trap-Tee-ze. Boca No. Joe ends up in the drop zone with his putt, and Erika almost secures a hole in one but she is right there on the green. I Had to catch my breath, like Joe and Rob and surely a lot of viewers, I was up out of my seat in shock and awe. Boca No Indeed, as Joe basically jumps into the water. Erika did substantially worse than Boca Joe falling off the bar and landing back first in the water. Boca Joe is in the drop zone, far from the hole and puts far too much on his putt going well past the hole in the opposite direction from which he came. Erika sits about two feet away, and secures her win, getting the plaid jacket, the golden putter, and her chance at the quarter million dollars in next week’s season finale. 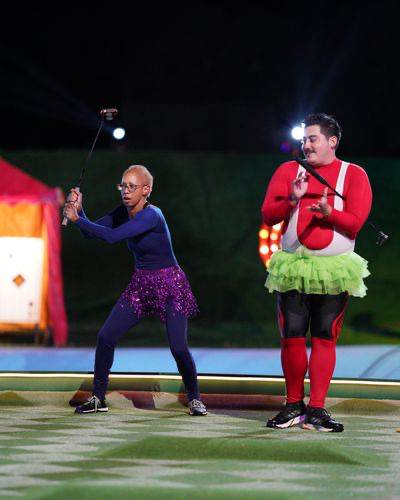 Holey Moley: Fore-Ever! Is on ABC Tuesdays at 8:00 PM, and available next day on Hulu.