Things are ramping up toward the end for Ms. Marvel on Disney+ with the premiere of the penultimate episode today. Last week, we saw Kamala and her mother go to Karachi as Kamala continues to dig for information on her family and this mysterious bangle that has unlocked her Djinn powers. 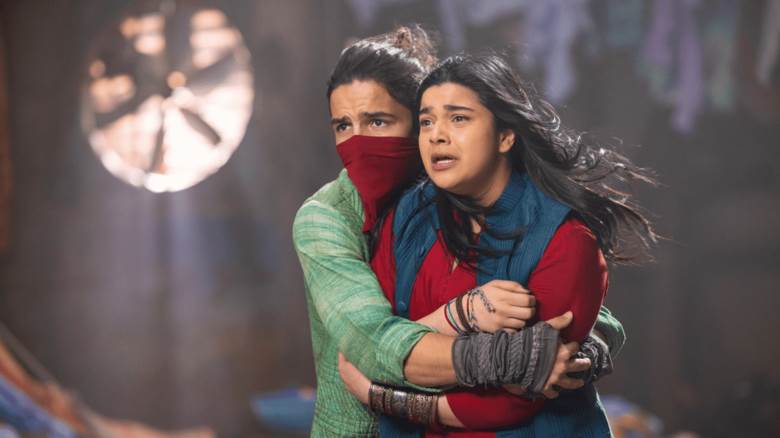 The episode opens with some old-timey footage explaining the history of British-occupied India. It then transitions to show Aisha running from British soldiers, before killing one of them. We then see Hasan, who is trying to inspire his people to fight back as Aisha watches on. The rally is broken up by some British soldiers.

Later, Hasan finds Aisha sleeping and wakes her up, only for her to threaten him. He offers her food and shelter but she refuses. That night though, she gives in and goes to Hasan for help. It doesn’t take long for her to open up and for them to bond. A time jump reveals that Aisha is now pregnant and that Hasan is Kamala’s great grandfather. Another jump shows Aisha caring for her baby, Kamala’s grandmother, and yet another shows her as a young girl.

Hasan grows frustrated with the fighting in his country and snaps at a neighbor who brings them milk and vegetables. Aisha is surprised to see Najma standing out in their fields. She later goes to meet her and the two embrace, but Aisha clearly doesn’t fully trust her. Najma wants to use the bangle to go home and Aisha lies to her about having hid it to buy herself some time. Najma gives her until sundown the next day.

Aisha convinces Hasan that they need to leave and they head for the train station where we saw Kamala at the end of last week’s episode. Aisha gives Sana, Kamala’s grandmother, the bangle to keep her safe. On their way to the station though, Hasan demands answers from Aisha regarding the woman she was talking to. Aisha shows Hasan the magic of the bangle and urges him to make sure Sana gets on the train.

They fight their way through the crowd but eventually, Aisha senses that they’re being followed and gives Sana to Hasan and heads back to buy them time. She finds Najma who stabs Aisha and moves on to look for the bangle. Hasan and Sana get separated before they can get on the train, just like the story Kamala’s father told in episode two.

Before she drops to the ground in pain, Aisha activates the bangle and we see Kamala arrive at the train station. Kamala, crying because of the story she has now seen unfold, finds Aisha. Aisha gives her a photo tells her she needs to save Sana and get her on the train, before she dies in front of her. Kamala finds Sana but she can’t get through the crowd with her to get her on the train. Instead, she uses her powers to try and get Sana around the crowd, creating hardlight platforms for her to jump on. She gets knocked over by the crowd though and the platforms break into stars that lead Sana to her father, just like in the story.

Kamala realizes it was her that saved her grandmother, introducing some time travel and a bit of a time paradox into the story. This could be the thing that ties Kamala into the larger MCU as time travel has become a recurring theme throughout the various shows and movies. When Kamala is returned to her time, she, Kareem and the Clandestines wake up to find a cosmic rift in front of them. Najma expresses some excitement for the opening of the veil that will allow them to return home.

Meanwhile, Kamala’s mother panics because Kamala has not yet returned home. Her cousin suggests that Muneeba simply track her phone to find her. 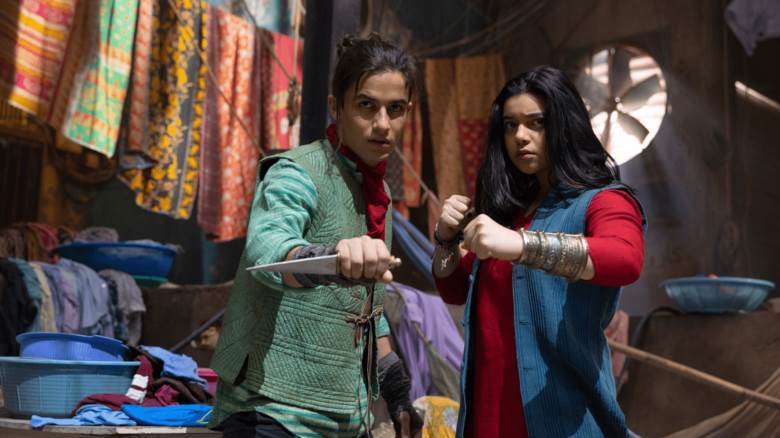 One of the Clandestines tries to step into the veil but is instantly destroyed by it. The veil then expands and clearly grows more unstable. Kamala tires to use her power to contain it while Kareem gets people to safety. Najma tries to approach the veil but Kamala urges her not to abandon Kamran. Najma instead steps toward the veil and seemingly somehow transfers its energy into Kamran, whose fist begins to glow.

The veil disappears as Kamala’s family arrives and see her using her powers. Kamala admits to being “that light gir,” which shocks her mother. Kamala hands the photo she got from Aisha to Sana, who is overcome with emotion. Muneeba seemingly accepts the truth of what Kamala and her family really is.

Kamala tracks down Kareem before he can leave. He tells her that he has to tell “the others” about what happened, implying that there are more Red Daggers out there. He also tells her that if she ever needs help, she can call him, hinting that he may help Kamala and the other heroes like he has in the comics. Before he leaves, he gives Kamala his scarf, another piece of her final costume. Muneeba also picks up Kamala’s necklace, which broke, creating the lightning bolt-esque image that we see on her costume.

Back at the house, the family looks at old photos and Kamala learns that her mother ran away when she was 17 to follow Bon Jovi. Muneeba seems to have turned over a new leaf and appears to be ready to allow Kamala to grow up and become what she is meant to be.

Back in Jersey City, Kamran goes to Bruno for help as he runs from the DODC. In Bruno’s apartment, he offers to help Kamran, who is holding out hope that his mother will return for him. As they talk, a DODC drone appears in the window and Kamran shoots what looks like a photon blast at it. The drone staggers back and wildly launches an explosive into the Circle Q beneath the apartment. The episode comes to a close with an explosion and with us not knowing if Bruno and Kamran are okay.

This episode interestingly felt a lot like a finale. It wrapped up Kamala’s family-centric story and gave us a lot of answers. However, it still leaves us wondering what has happened to Kamran after he absorbed the veil and whether or not he and Bruno will survive. It appears the DODC is the antagonist for next week’s finale, but we also don’t know where Kamran will fall in all this.