Heartbreak may not be something one would typically associate with Disney Villains, but author Serena Valentino’s story chronicling Captain Hook’s origins truly broke my heart. It is a story that only Valentino could so expertly tell and comprises a clever and daring crossover between Captain Hook from Disney’s Peter Pan and the author’s original behind-the-scenes tale. 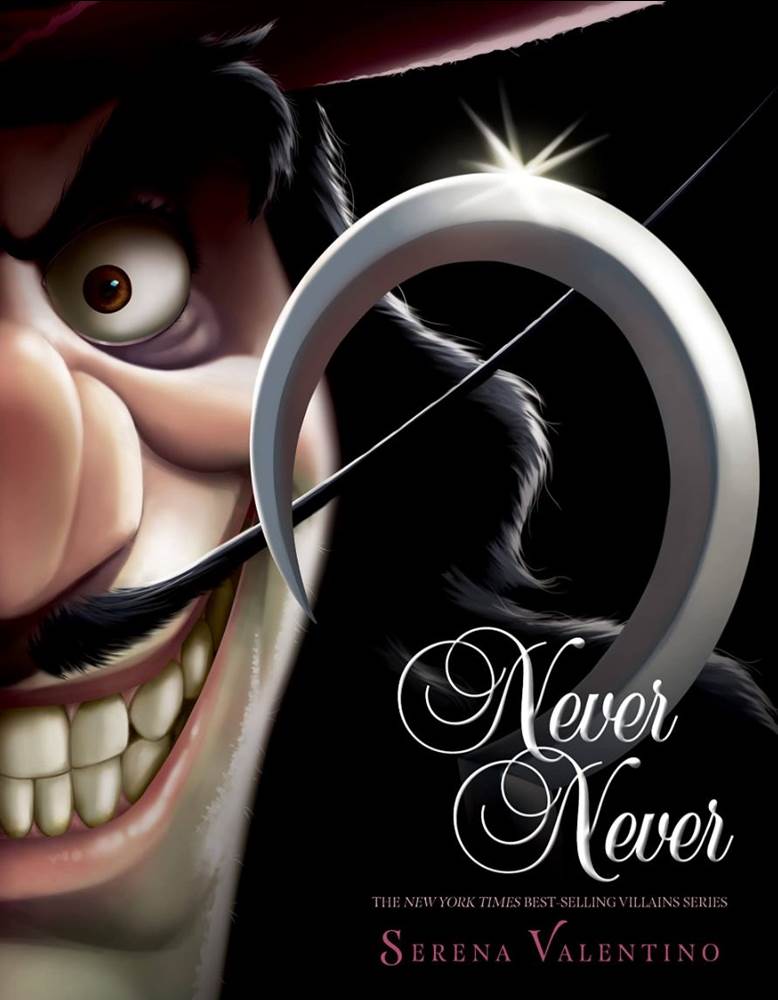 Never Never is Book #9 in Valentino’s Disney Villains stories which consistently shed new light on old characters in an entertaining, thought-provoking way. For a full list of the books in the series and the appropriate order in which to read them, please see the below list at the bottom of this article.

What is Never Never about?

Never Never explores the pertinent parts of Captain Hook’s past before picking up where Disney’s Peter Pan begins – Captain Hook’s role as the infamous Neverland villain hellbent on killing Peter Pan. The tale shapes Captain Hook’s – or rather a young James Bartholomew’s – early experiences while also giving us his perspective on meeting Peter Pan and his foreshadowed destiny. Valentino weaves wonders by showing us the world through a young Captain James Hook’s eyes.

So, before Peter Pan and Wendy, and before the Lost Boys, there was a boy named James who wanted to get back to Neverland. As a baby, James Bartholomew fell out of his pram and was taken to Neverland. James is claimed by his parents just shy of seven days―after which he would have officially become a Lost Boy. Once he returns to London, he never stops thinking about Neverland. As he grows up, he hates his life in London, and everything to do with growing up and eventually becoming a gentleman. So, he seeks a position on the ship of the infamous pirate, Blackbeard.

On Blackbeard’s ship he learns to be a cutthroat pirate, and eventually becomes captain of his own ship, which James is determined to sail to Neverland. With the help of the Odd Sisters and a bit of magic, he just might get his wish. But returning to Neverland comes at a price―and now that he’s grown up, the whole world seems to be rooting for his demise…

Captain Hook’s journey to Neverland is a dream-turned-nightmare

“Realizing one’s dreams can be a terrifying venture, for fear they don’t meet one’s expectations.”

Blackbeard gives James this advice early on and it is paramount to the story’s trajectory and to my entire sense of unease about this tale. That is not a criticism – I suspect that unease is precisely what Valentino intended. While I have enjoyed all the Villains novels to date, this one gave me the greatest angst and discomfort in knowing what becomes of Captain James Hook and how desperate his beginnings were. After all, they were paved with only the best and most innocent of intentions: to fulfill his childhood dream.

That dream becomes an obsession and quickly dissolves into a nightmare. James’ sense of fulfilling his dreams becomes so distorted that one cannot pinpoint exactly where he loses his way. It is confronting, disquieting and ultimately heartbreaking. Not to mention that danger lurks everywhere – especially when it comes to the Odd Sisters and their meddlesome ways.

Valentino’s original, behind-the-scenes tale across the entire Villains series largely culminates in this story. I strongly recommend that Never Never be read as part of the series and not simply as a standalone novel. The origins of the Odd Sisters, Circe, Primrose, Hazel – as well as the fates of Princess Tulip, Beast and Gothel – are explored in significant detail in this story and various questions from previous novels are answered. If starting with Never Never, readers new to the series may get lost in a whirlwind of history, dark magic, time and space. It is a lot to digest and may be overwhelming if the reader does not have any familiarity with Valentino’s original characters and their expansive universe. This is not necessarily the case in the prior novels, but in my view, it is certainly the case with Never Never.

That said, the Book of Fairy Tales provides an exciting umbrella to the Villains series and introduction to Never Never. The Many Kingdoms and the Odd Sisters universe is rich, intricate and inviting, and is fantastically interwoven with Hook’s origins. Fans will delight in being reunited with some of their favorite Valentino characters, and there is also great humor in this story.

What I found most thrilling about Never Never is that it is jam-packed with pirate tales and adventure. It was a joy to read about Blackbeard, the crew’s encounter with the Kraken, James’ love for books and pirate lore, as well as his overall swashbuckling journey to villainhood. The integration of Valentino’s original characters is well done and opens up a whole world of inner workings – both in the Disney universe and beyond. But reader beware: if Hook’s story breaks your heart too, I suspect it shan’t be mended in later novels. Thankfully, Valentino’s creativity, characters and writing style more than makes up for it, up to and including the satisfying, surprising, bitter end.

Author Serena Valentino has taken the world by storm with her New York Times best-selling Disney Villains novels published by Disney Publishing Worldwide. Not only do Valentino’s stories give readers the opportunity to explore villains they know and love, readers are also introduced to new characters that operate behind the scenes of classic Disney plots, giving tales-as-old-as-time a bewitching new twist.

The books in the series are as follows and are best enjoyed if read in this order: