They’re creepy, crawly, and crunchy. Small and irritating, nary a friend to you or me. And they’re perhaps the most hated nuisance on the planet – BUGS. Or maybe they’re just a tad misunderstood? Over the decades, Disney has created quite a few sympathetic versions of these oft-swatted friends. Let’s take out our magnifying glass and check out some of the most well known (and in most cases loved) bugs in the Disney universe. These are in no particular order, so just enjoy (and try not to step on them). 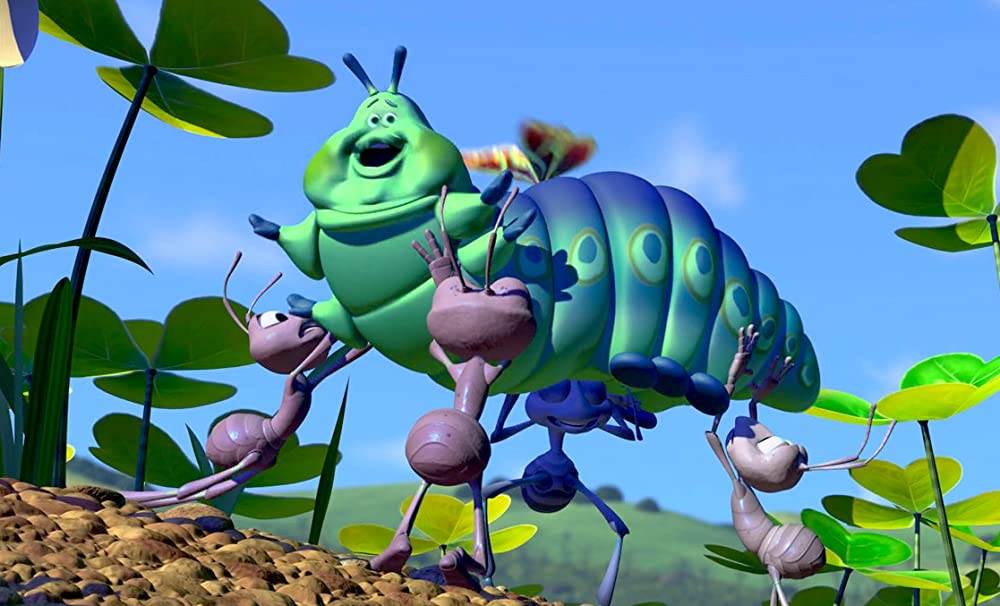 Give a little whistle! Pinocchio’s trustworthy friend and conscience Jiminy Cricket is probably the most cuddly entry into our list of tiny friends. Jiminy’s honesty and loyalty help guide Pinocchio in his adventure through many of childhood’s difficult temptations. When Pinocchio’s decisions lead him astray for a while, Jiminy doubles down on helping him find his creator (and eventual father) Gipetto in the belly of the beast – Monstro the whale. While Jiminy made his first appearance in 1940’s Pinocchio, his charm and popularity invited him back for return engagements, including a turn as the Ghost of Christmas Past in Mickey’s Christmas Carol. Jiminy hosted a series of shorts in the 1947 package film Fun and Fancy Free, and played similar host/educator roles in many television shows, including Mickey Mouse Club, Disney’s Sing-Along Songs, and many anthology/educational specials.

The second cricket on this list, Cri-Kee is a quiet but steadfast ally of Mulan in the 1998 film of the same name. The tiny cricket – who communicates with chirps and gestures – was personally selected by Mulan’s Grandmother Fa, who believes him to be lucky. Cri-Kee initially proves anything but lucky, when he accidentally ruins Mulan’s experience with the Matchmaker. But after Mulan sets him free, he decides to follow her on her adventures. 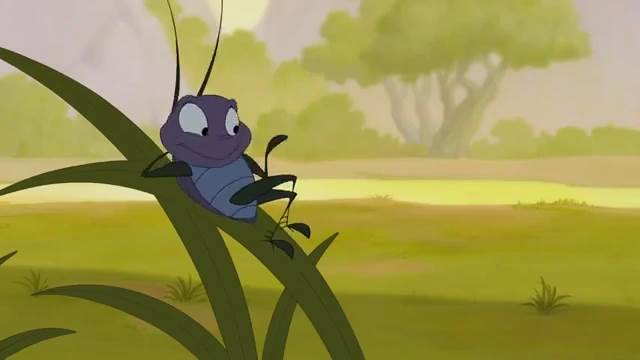 Cri-Kee eventually teams up with Mushu – the outspoken red dragon assigned to find Mulan and bring her home to safety. Instead of simply bringing her home, Cri-Kee and Mushu follow Mulan on her journey into war, and help her blossom into the leader she was always meant to be. Throughout the film, Cri-Kee survives many different perils. Maybe he is a lucky cricket after all?

Not exactly the most welcoming start to a conversation. When Alice first finds the Blue Caterpillar in the 1951 film Alice in Wonderland, he appears as a rude, unapproachable character smoking a hookah pipe.  The enigmatic caterpillar answers Alice’s series of questions with unsatisfying (and smoke-filled) responses, and in return asks a series of his own short queries, doing nothing but confusing Alice in the process. Their circular conversation ends with Alice even more confused and discouraged than she already was. At the end of their little chat, the Blue Caterpillar gets insulted by Alice’s claim that three inches tall is “such a wretched height.” He angrily puffs into a cloud of smoke and flies away a butterfly. 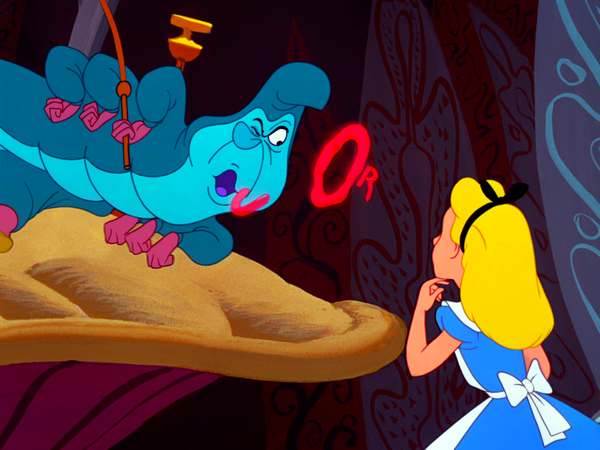 Alice may have been wholly unsatisfied after this frustrating conversation, but the butterfly did give her a clue for how to grow back to her original size – eating the top side of a mushroom (or was it the bottom side?).

What would you do if you were face-to-face with a giant killer scorpion? Seek defense from an ant, of course. In the 1989 film Honey I Shrunk the Kids, quirky inventor Wayne Szalinski accidentally shrinks his kids (and their neighbors) to the size of ants. As you might guess, the four kids go on a wild adventure…through their backyard. Being significantly smaller than a Lego block, even the tiniest of bugs can present a real danger. Antie (an ant, as you may have guessed) was initially viewed as a threat to the kids, but quickly came to be trusted as an ally. In one particularly tense moment in the film, when the kids were under attack by a scorpion, Antie came to their defense, helping them fend off the predator.

Unfortunately, Antie suffered a fatal sting from the scorpion, but he gave the kids a second chance to get back home to safety. Rest in peace, Antie.

We’ve arrived at the first entry on our list that isn’t actually a bug. Watto – the shady junk dealer from the 1999 film Star Wars: Episode 1 – The Phantom Menace – is an alien (a Toydarian to be exact). While Watto may not be a bug, his features are unmistakably insect-like – translucent wings, bony, angular limbs, and a smooth, shiny head. There are glimpses of softness in Watto’s hard exterior, but for the most part he’s just a self-serving bug trying to make his way in the universe. “My name Raymond, but everybody call me Ray.” (stated enthusiastically in a Cajun accent)

Fireflies will undoubtedly always make a top ten list of the most magical and charming real life bugs. So it’s surprising that Disney’s storytellers never gave life to an animated firefly until 2009’s The Princess and the Frog. Ray combines down-home familiarity with otherworldly whimsy to make one of the most lovable Disney bugs of all time. Ray maintains a self-assured trust that one day he’ll find his Evangeline – the firefly of his dreams. He looks for her everyday in the stars of the night sky, and signs a song of hope amid sorrow, waiting for the day he’ll see her at last. 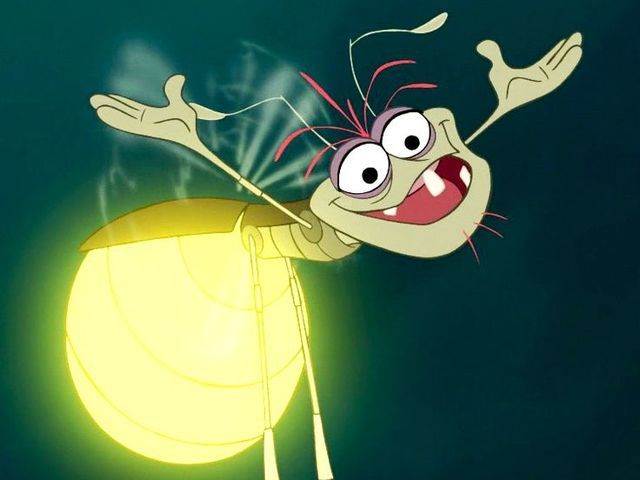 While attempting to help Tiana and Naveen in their fight to free themselves from the Shadowman’s spell, Ray is unceremoniously crushed by their nemesis. Ray’s light on Earth was extinguished, but in the film’s most touching moment, his faith in finally meeting his Evangeline is rewarded when he himself becomes a star in the sky, sitting right next to his longtime love. Hmmm, maybe all fireflies go to heaven?

“I am the shadow on the moon at night, filling your dreams to the brim with fright.”

He’s not cute. He’s not cuddly. In fact, he’s pretty gross. But somehow, Oogie Boogie has endured – even thrived – since his villainous turn in Tim Burton’s The Nightmare Before Christmas. The Gamblin’ Boogie Man will stop at nothing to take Sandy Claws – and Christmas altogether – from Jack and Sally. 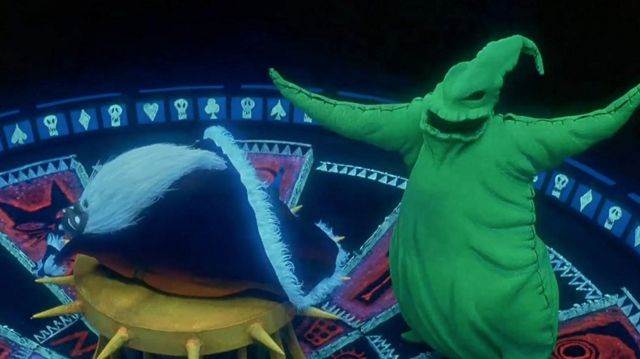 Fortunately, Oogie has a weakness. His body is entirely composed of bugs, all held together within his burlap sack skin. During their epic showdown, Jack pulls a thread from Oogie’s sack, which starts a pull and opens him up wide. Without the shell, Oogie’s insides – thousands of tiny colorful bugs – spill away and boil up in Oogie’s cauldron full of brew. Ew, ew, and double ew!

Fans of this Boogie Man can see him at Halloween parties in both Disney California Adventure and Magic Kingdom.

The Volkswagen Beetle has always held a place in the hearts of car lovers worldwide. The large personality of this tiny auto make it perfect for a starring role in Disney’s 1968 live-action film. Herbie first appears as a broken down, cast-off beater. But there’s more to this bucket of bolts than meets the eye. Herbie has a full-blown mind of his own, and a stubborn streak to match. When the VW Bug endears himself to struggling race car driver Jim Douglas, the two pair their abilities to outwit the slimy auto dealer Peter Thorndyke, who is a racer himself. 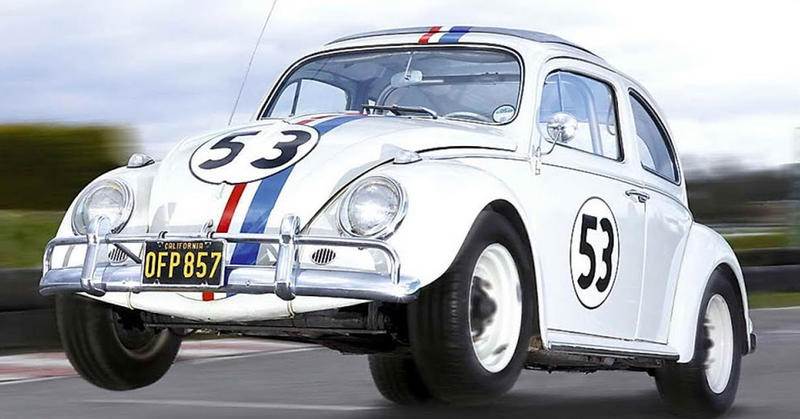 Upon finding out about Herbie’s racing abilities, Thorndyke offers Jim a little wager –  the winner of the upcoming El Dorado Road Race will have full ownership of Herbie (and in Jim’s case, all future payments for Herbie will be forgiven). During the race, Thorndyke throws every trick in his shady book at Herbie and Jim. Ultimately, our heroes come in first place. Herbie has gone on to star in several sequel films, in what has become quite a nice little film franchise. Will we see Herbie on the big screen again? Here’s hoping.

Fun Fact: Did you ever wonder why Herbie’s racing number is 53? The Love Bug film producer Bill Walsh was a fan of the Los Angeles Dodgers Hall of Fame baseball pitcher Don Drysdale, who wore number 53!

Ok, I know – spiders aren’t bugs, they’re arachnids. But for the purposes of our conversation, your friendly neighborhood Spider-Man fits in nicely. The witty, wisecracking teen superhero was created in 1962 by Disney Legend Stan Lee. Since then, he has endured for decades as one of the most popular comic superheroes of all time. Spidey – aka Peter Parker – resides in Queens, NY, where he patrols the skyline via weblines and sticky fingers. Despite his long history in comics and previous film and television appearances, Spider-Man first made his way into Disney’s Marvel Cinematic Universe (MCU) in 2016’s Captain America: Civil War. Since then, the webslinger has gone on to star in three of his own feature films, plus appearances in Avengers: Infinity War and Avengers: Endgame.

Want to feel what it’s like to be Spider-Man? Check out WEB SLINGERS: A Spider-Man Adventure in Disney California Adventure’s Avengers Campus.

Ant-Man and the Wasp

Not to be outdone by Marvel’s most popular comic superhero, reformed con artist Scott Lang has made quite a name for himself in the Marvel MCU. Thanks to shrinking technology invented by the brilliant scientist Hank Pym, Lang’s alter ego Ant-Man can shrink to the size of…well…an ant (while still maintaining physical strength and durability that disobey the laws of physics). 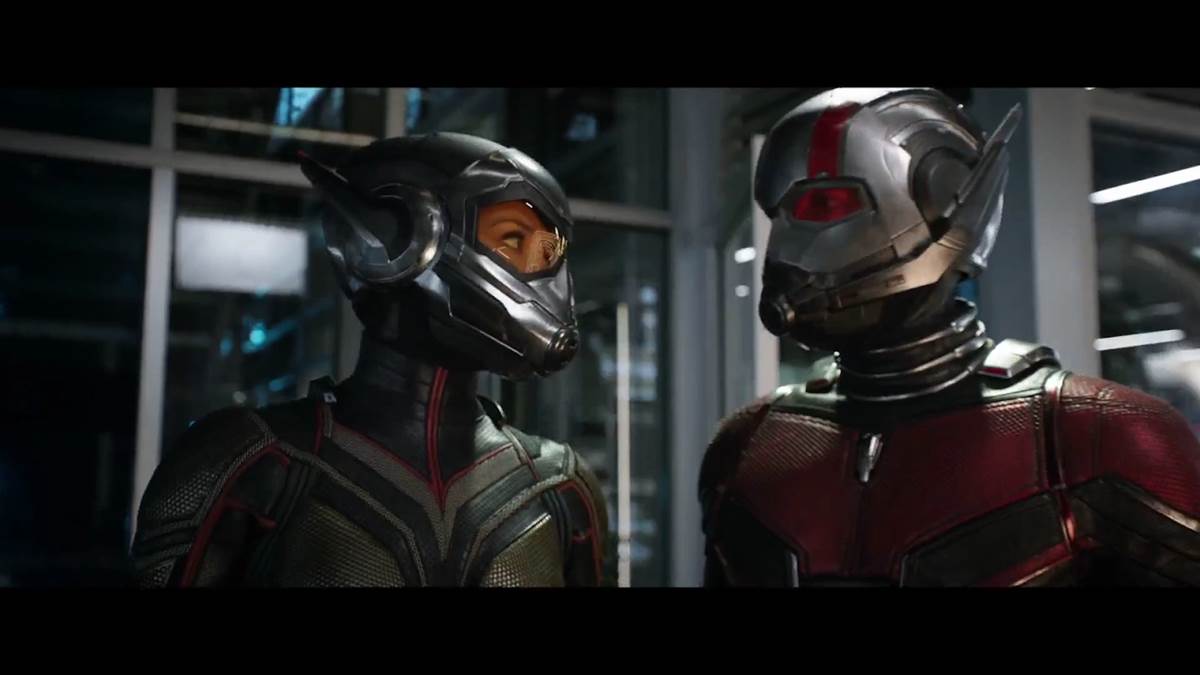 In 2018’s sequel Ant-Man and the Wasp, Lang’s love interest – Hope Van Dyne – joins him in fighting crime. The duo make a humorous team as they weave their way through shenanigans, both large and small (and giant, and microscopic, and everything in between). The pair will fight alongside each other again in Ant-Man and the Wasp: Quantumania, coming to the MCU in 2023.

The Entire Cast of A Bug’s Life

The final and most obvious entry into our list of top Disney bugs has to be the cast of Disney-Pixar’s 1998 film A Bug’s Life. From top to bottom, this creative film is full of some of the most colorful characters in the Pixar universe. The film’s hero Flik is a well-meaning (though clumsy) blue ant. When his colony is in danger from Hopper and his gang of grasshopper bullies, Flik sets out on a journey to find help. Along the way he meets a whole cavalcade of characters, including Francis – a sour male ladybug, Heimlich – a plump green caterpillar with a German accent, Slim – a dapper walking stick, Manny – a praying mantis, Rosie – a black widow spider, P.T. Flea – owner of a tiny flea circus, and others. The crazy plan concocted by Flik and his newfound friends ultimately failed to fully scare off Hopper’s gang, but it did help Flik and his colony to understand that the power of teamwork and numbers can help the ants overcome their controlling foes.

There you have them – the very best bugs in the Disney universe. You didn’t step on any, did you? Boy, it’s tough to be a bug!

Did we miss any of your favorites? Let us know with a comment, either here or on social at: