Since Disney acquired Fox in 2019 they’ve been working to breathe some life into Buffy the Vampire Slayer with new canon material. Instead of jumping into movie or television mediums, they’re currently sticking with books and the first two youth novels are out now. In January we picked up on the current timeline following a new vampire slayer, Frankie, and now, we’re heading way back to 1900s London to follow Spike, his girlfriend (and sire) Drusilla and Darla, the vampire who brought them all together. 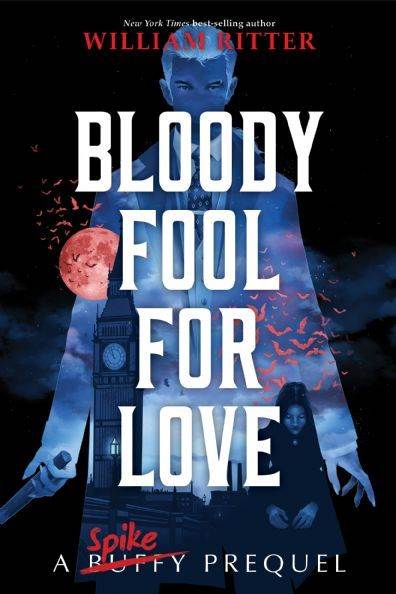 The latest outing, Bloody Fool For Love: A Spike Prequel, hails from William Ritter (Jackaby; The Oddmire) and gives readers a taste of what Spike and the gang—sans Angel—were up to 100 years before they terrorized Sunnydale, California. See, Angel has been cursed with a soul which totally takes the fun out of killing humans and he’s left their happy little vampire family. Still stinging from the abandonment, and fresh off his first Slayer kill, Spike discovers someone in their group has a one way ticket to Germany and fears it belongs to Drusilla. Determined to give her a reason to stay, he seeks out a rare ancient relic that will help with her tarot and psychic readings and makes plans to secure it for her. Of course this is Spike we’re talking about and nothing he plans ever turns out quite the way he expected.

The story mainly follows Spike’s exploits, but there are a few moments and a subplot or two that give the reader insight on other characters and what they’re up to. And while fans of the TV series are no doubt familiar with the main three, there’s a whole host of other vampires, demons and creatures of the night that play a role in this bloody romp. In fact there’s a Vampire Guild and a powerful crime syndicate that are always happy for fresh blood—to employ or enjoy depending on your luck. Interestingly, there are very few human characters featured here which makes the bloodshed, betrayal, and mutilations more palatable.

Yes, it’s violent and a bit horrific at times, but there’s nothing out of the ordinary or too gruesome for the Buffyverse. With vamps and other supernatural creatures working for and against each other, I believe the vibe Ritter was going for is akin to a Suicide Squad and something that will appeal to its targeted teen audience.

Coming in at 250 pages, the book is a quick read that feels like something that would be told in a three to four part story arc in Buffy. It’s perhaps a bit modern in dialogue for the time period, but nevertheless Spike, Dru and Darla read just the way they do on screen. From the get go I could hear everything spoken in the voices of James Marsters, Juliet Landau, and Julie Benz which I think is a huge achievement and proves Ritter truly understands these characters.

Also, I may be the only person who cares, but Ritter cleverly includes the word “effulgent” twice (!) and it’s the perfect nod to Spike’s miserable past and terrible time finding love. The effulgent moment in Buffy comes from a Spike-centric episode aptly titled “Fool For Love” (S5 E7) and is one of the most heartbreaking scenes featuring Spike pre-vampire. I appreciate how Ritter quietly referenced the show in a way fans would recognize without detracting from the novel.

With its prequel nature, Bloody Fool For Love works to fill in a few gaps in Spike’s history— my favorite is Miss Edith’s origin—while leaving the door wide open for a century’s worth of misadventures. It’s centered on a short period of time in Spike's undead life and thus the stakes never feel very high, but it’s a rather fun, proper demon caper that you can really sink your teeth into.

I give Bloody Fool For Love 3.75 out of 5 pinkie fingers.

Bloody Fool For Love is available now in print, digital and audiobook format.