Visiting a Disney theme park can be almost as quick as saying “Bibbidi-Bobbidi-Boo” with Disney Happiest Day Game: Magic Kingdom Park Edition from Funko Games. Whether you just need a dose of Walt Disney World magic from the comfort of your home or need some help getting familiar with the park’s layout ahead of a family vacation, this board game offers a lot of fun. Perfect for ages 5 and up, younger players can certainly enjoy the game with some assistance. All you need is 2-6 players and your love of Disney to dive into “the most magical place on Earth.” Gameplay occurs over the course of a single day in Magic Kingdom Park. Players start by deciding which character they will be: Mickey Mouse, Minnie Mouse, Donald Duck, Daisy Duck, Goofy, or Pluto. Each pawn is posed in a way that not only expresses their personality but also how they would play in the park. Donald Duck, for example, seems to be frustrated with his park map. 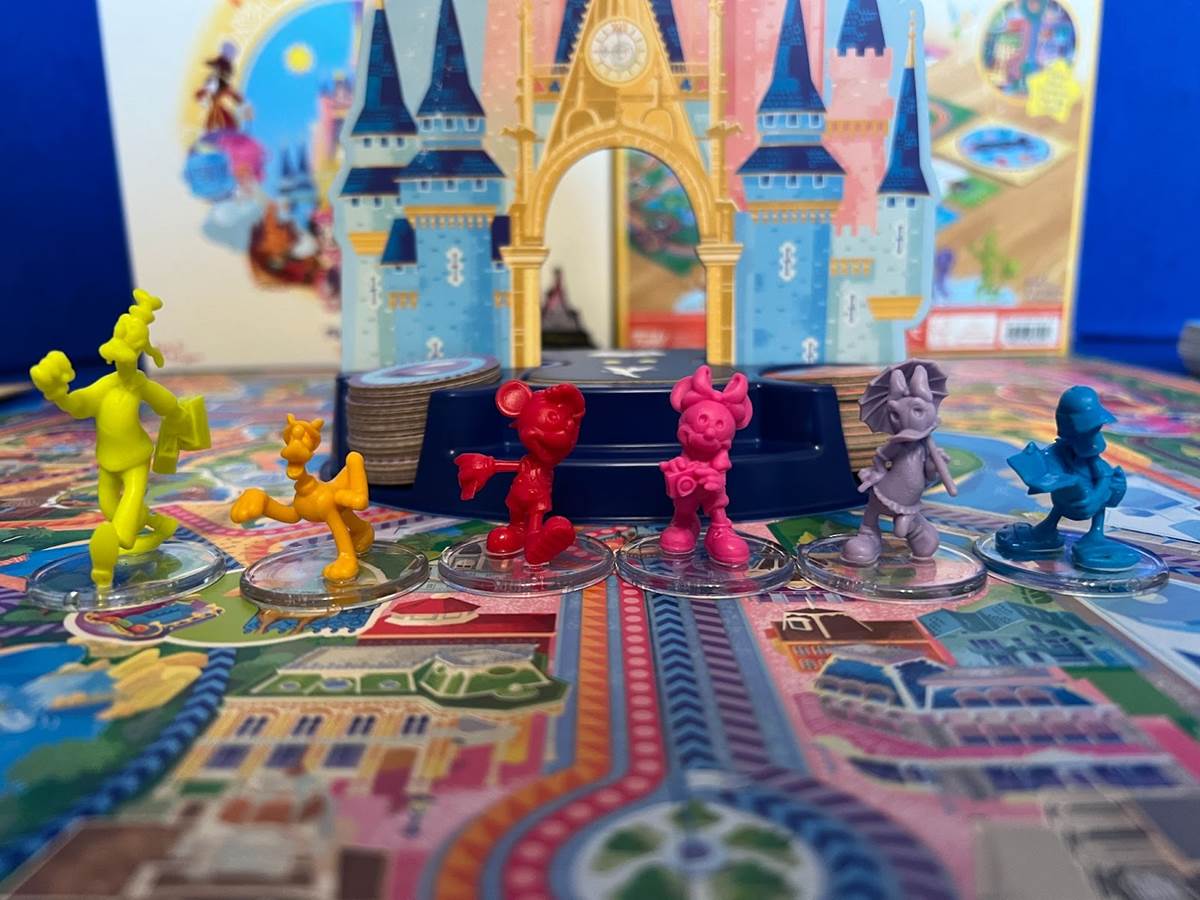 A deck of cards contains locations and characters that can be found on the map and each player can hold up to four cards at a time. The goal is to have more points than anyone else when the park closes, achieved by visiting more locations or characters. The cards have between 1 and 3 stars on them, which are placed in your bank once they’ve been unlocked. But as anyone whose ever been to Magic Kingdom will know, that space between destinations can sometimes feel far. All players start at the center of the park, underneath Cinderella Castle. A spinner is used to determine whether players receive balloon tiles (one of four colors) or have the ability to either return to the castle or jump to a space on a card. If jumping to the space, each card has a question and players must answer it aloud. Players return balloon tokens in order to move between spaces by following a colored route. 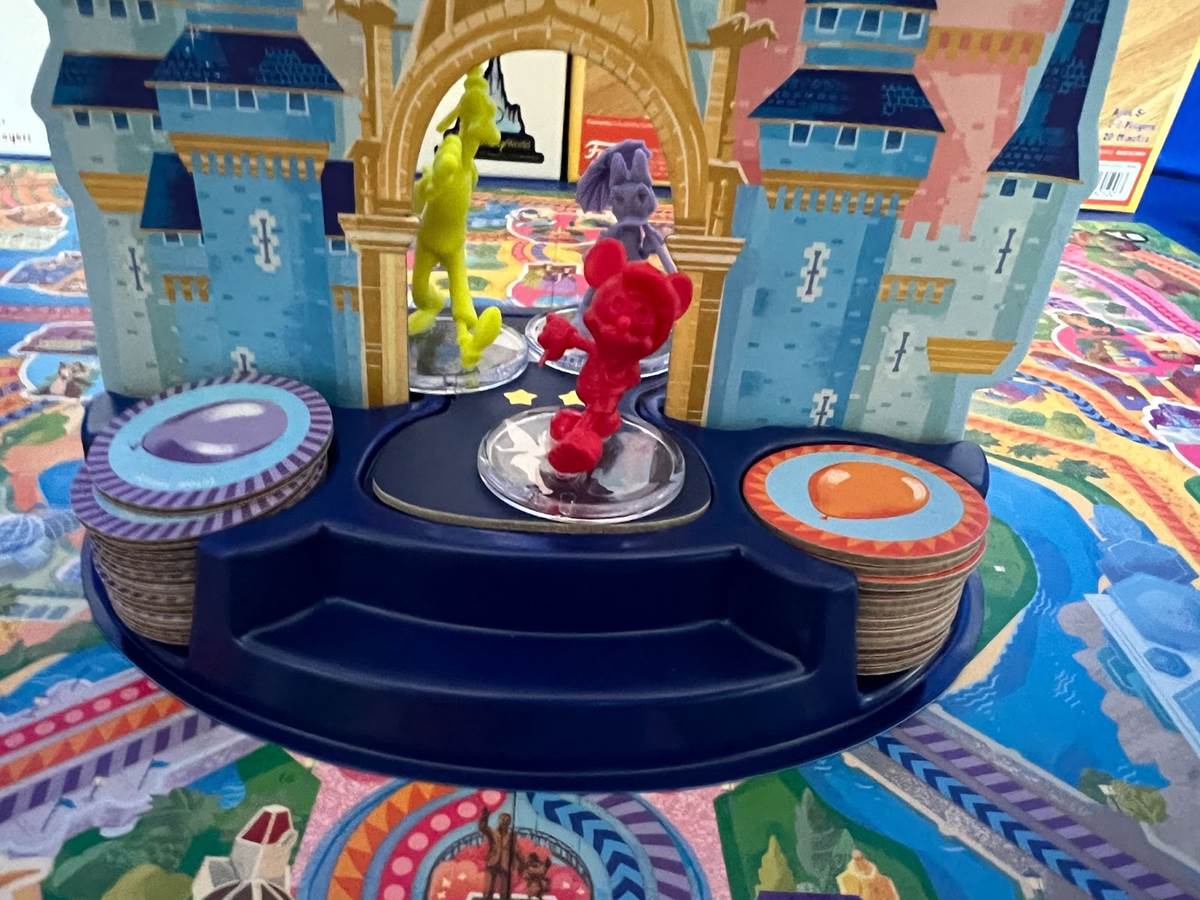 In the photo below, if we were trying to get from Cinderella Castle to Walt Disney’s Carousel of Progress, we would need a blue or purple balloon tile to get to the Astro Orbiter, and then a blue balloon tile to get there (we would also go a longer route by using an orange balloon to stop at Buzz Lightyear’s Space Ranger Spin and then a pink balloon to reach our destination). There’s no limit to how many spaces you can move to in a turn, but it is hard to acquire enough balloons to get very far on each turn. 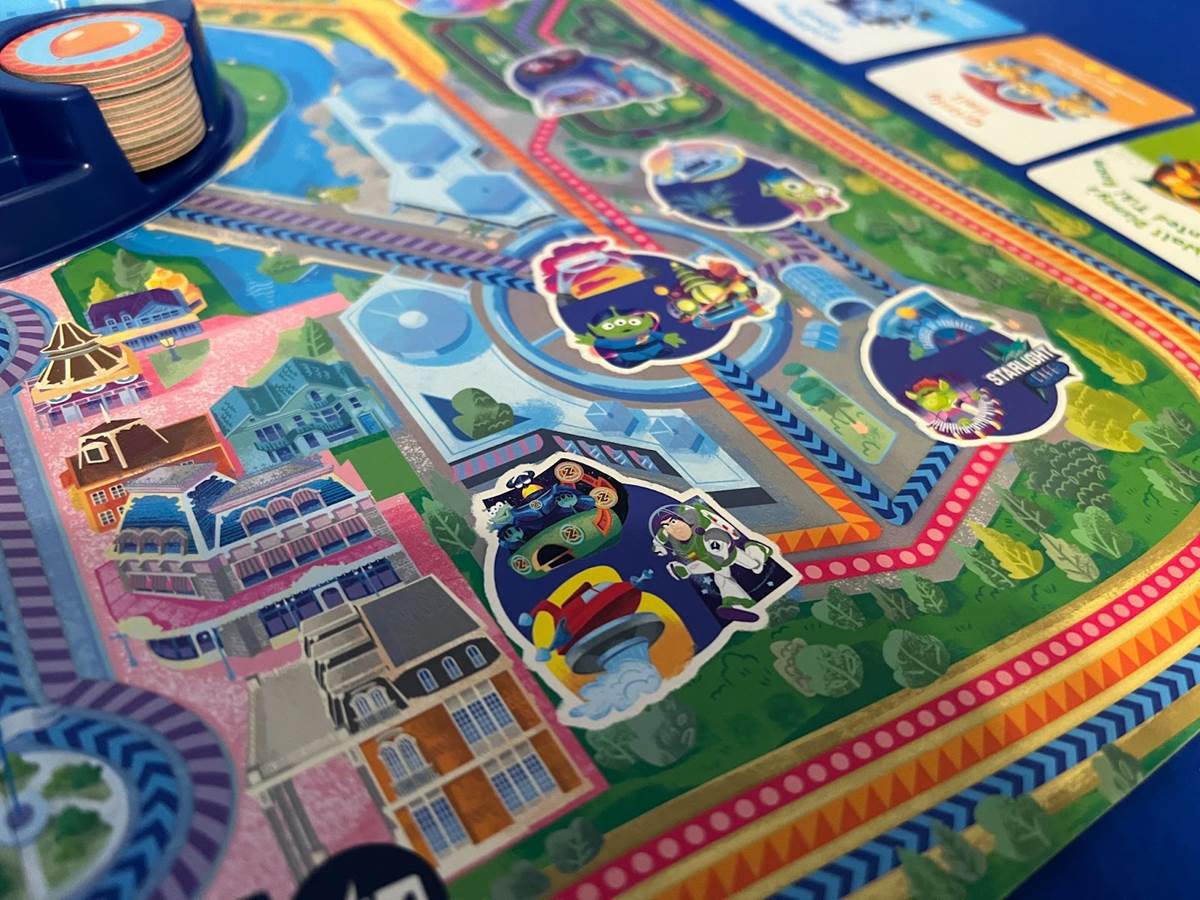 Like the park itself, the board game looks a little different at night. Tinker Bell is always fluttering above the castle on a path determined by how many players there are. Once she reaches the top spire, it’s time to flip the game to nighttime. This is as simple as flipping the board over and setting the castle’s base back down. 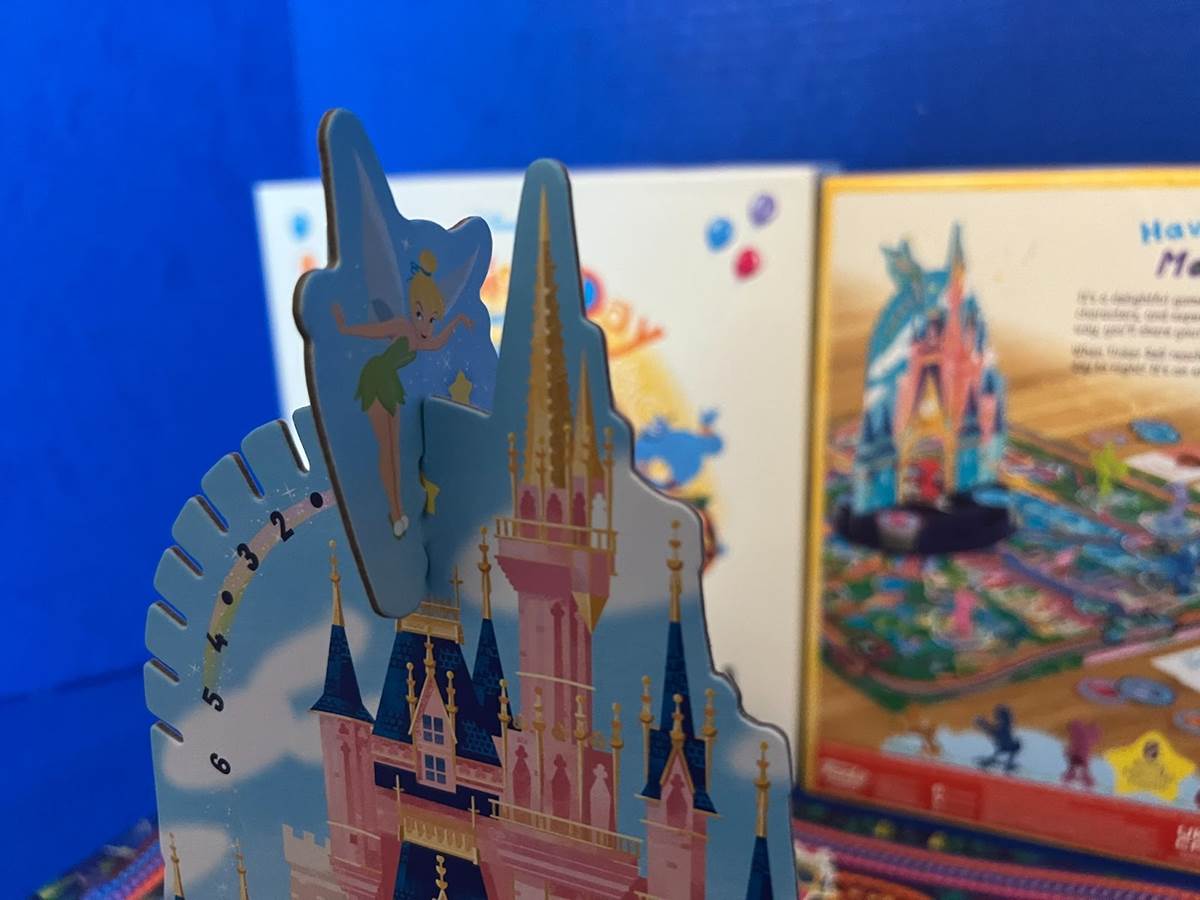 The biggest impact from the transition to nighttime is that some of those colored paths have changed and a few characters have moved. This means if you had a strategy in your mind when the board was flipped, you may have to rethink things. As an example, let’s take another look at how we would get from Cinderella Castle to Carousel of Progress. 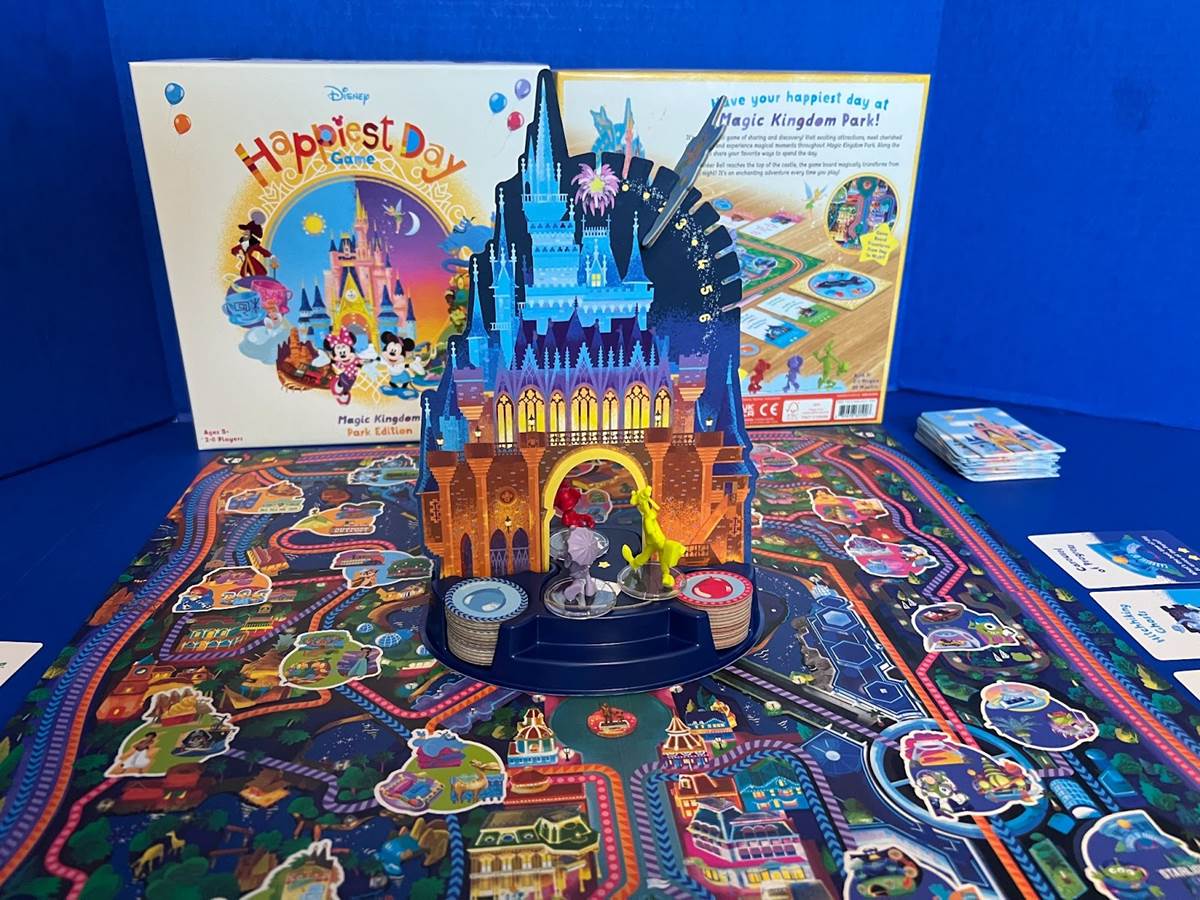 Previously, the most direct path was purple or blue, followed by another blue. Now only purple will be acceptable for the first part, meaning if you’re at the castle and don’t have a blue balloon, you’ll have to wait or choose an alternate path, such as heading to Main Street U.S.A. and cutting into Tomorrowland along that path. 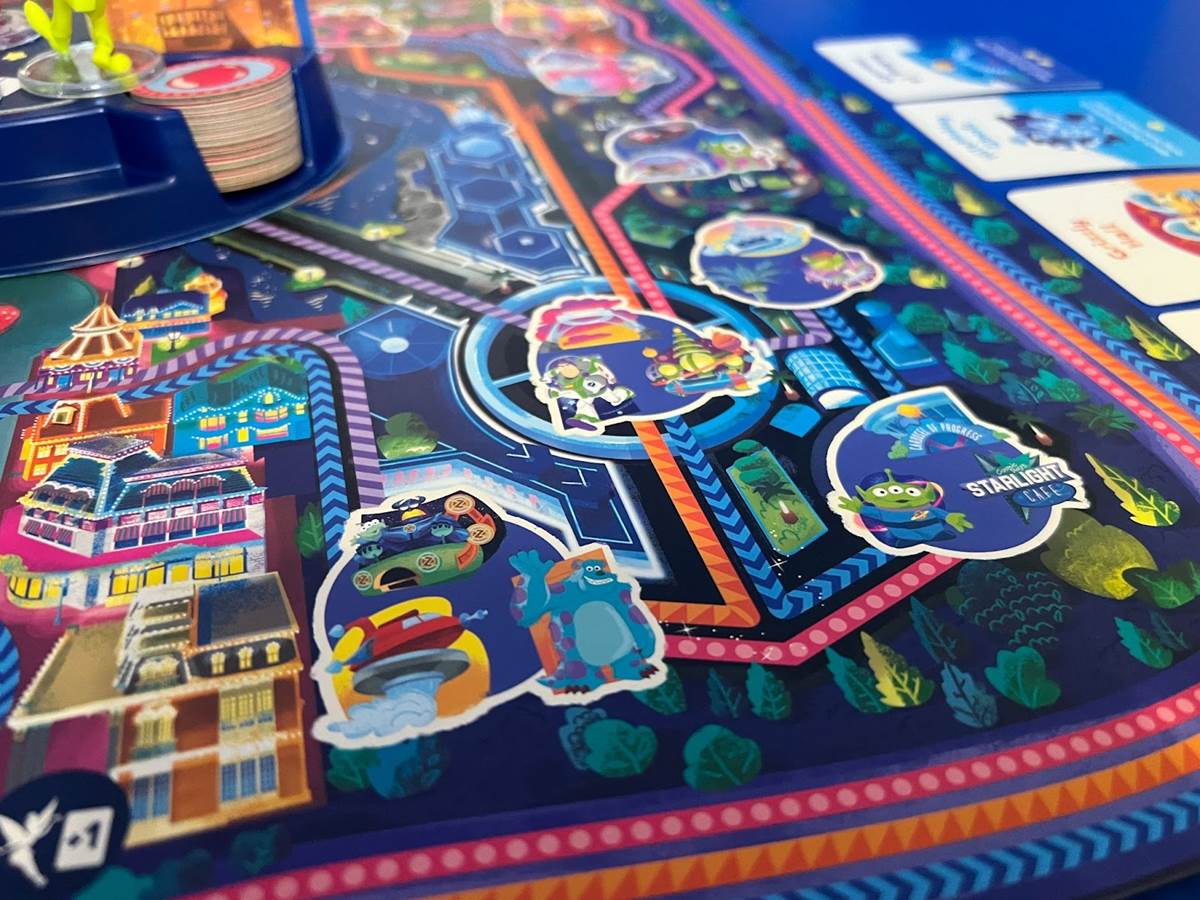 There are some bonus points to be earned at the end, including a star for whoever causes Tinker Bell to reach the castle again during the night and two stars for anyone who was at Cinderella Castle when the day ended. Then it’s as simple as counting up all of your points to determine a winner. But in all honesty, anyone who got to spend a day in Magic Kingdom will feel like a winner. Diehard Disney Parks fans will appreciate the way the game includes not only well-known Disney characters, but also characters created just for the park. You’ll find cards for Sonny Eclipse, for example, the animatronic superstar who entertains at Cosmic Ray’s Starlight Cafe. Or Bubbles, Bunny, and Buelah, the bluebonnet trio performing twice an hour over at Country Bear Jamboree. In real life, you don’t need balloons to get from one location to another at Walt Disney World, but one thing Disney Happiest Day Game: Magic Kingdom Park Edition is spot-on with is the layout of the park. Players can use the Walt Disney World Railroad to move around the board a little faster, with the three train stations accurately placed in each land. A family getting ready for their first trip will be better able to get around the park after playing because they will know some of the basics, like which side of the castle they go if they’re looking for Frontierland, or where they might head if they wanted to get a picture with a Disney Princess. The questions on the cards might also help players determine how to plan their day better, as they might reveal what each player might enjoy most when they visit. 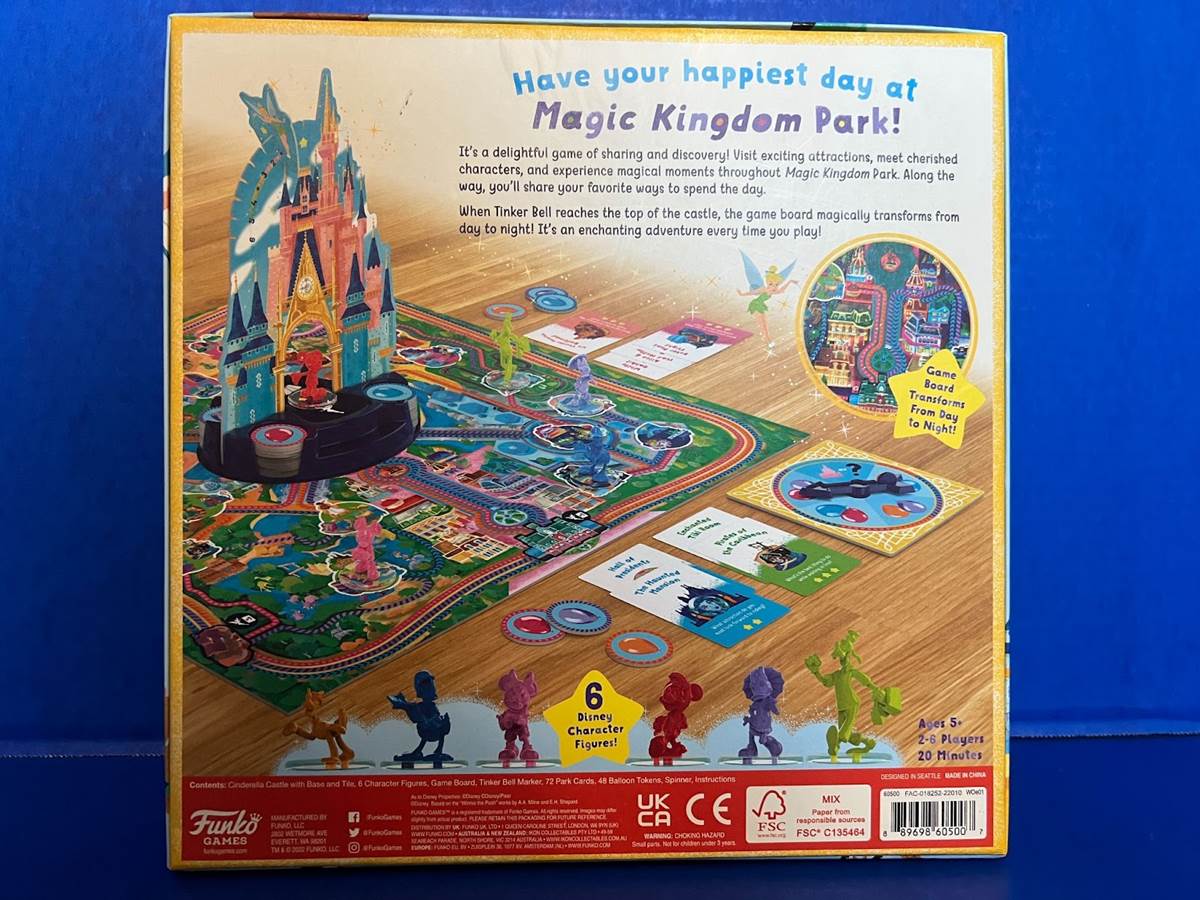