After Life is the eighth book in the Blue Bloods series. While this book is my introduction to the series, I was still able to appreciate the story and characters despite not being familiar with the historical context provided in books 1-7. Author Melissa de la Cruz is a gifted writer and manages to transport and plug readers right into the heart of the action and the drama – whether you are beginning with book eight or not. 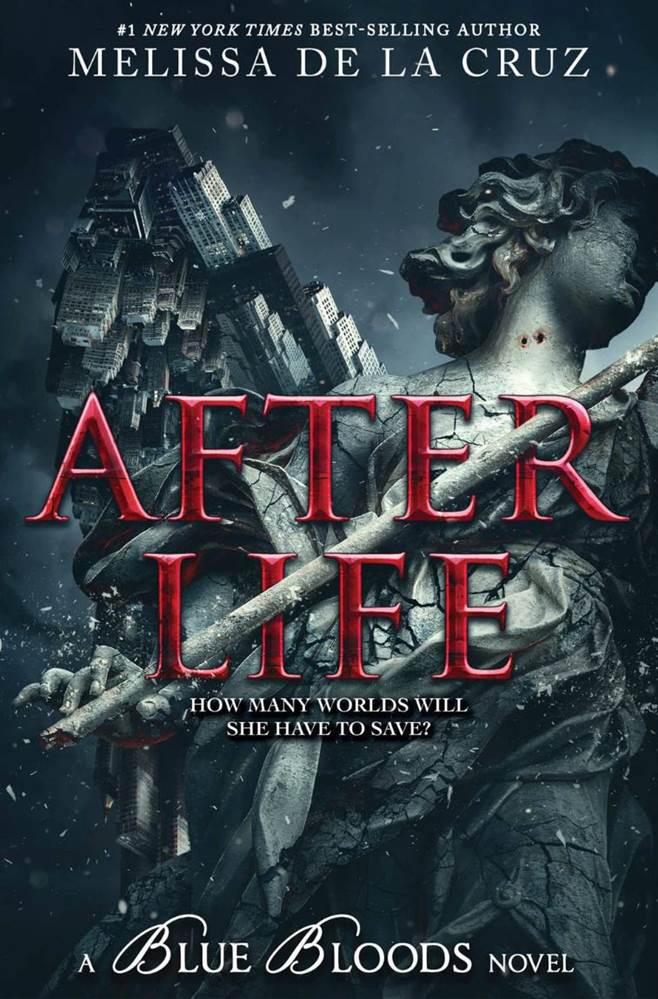 What is the Blue Bloods series about?

Schuyler Van Alen is confused about what is happening to her. Her veins are starting to turn blue, and she's starting to crave raw meat. Soon, her world is thrust into an intricate maze of secret societies and bitter intrigue. Schuyler has never been a part of the trendy crowd at her prestigious New York private school. Now, all of a sudden, Jack Force, the most popular guy in school, is showing an interest in her. And when one of the popular girls is found dead, Schuyler and Jack are determined to get to the bottom of it. Schuyler wants to find out the secrets of the mysterious Blue Bloods. But is she putting herself in danger?

Where does After Life kick off?

The Blue Bloods are back…more fanged and fabulous than ever.
After defeating Lucifer and sacrificing the love of her life, Jack, Schuyler wakes up back in New York safe and sound. Only it’s not quite the New York she knows, and she’s not in her regular body. She looks different and feels different and so does everyone else. Schuyler soon discovers that in this world, her best friend has a different last name, her parents are both alive and well and one of them is an entirely different person, and the love of her life? Not so dead after all. The catch? Jack has no idea who she is.

As it turns out, Schuyler is not in her New York. She’s not even in her universe. This is an alternate reality. One where Lucifer is alive and well and acting as mayor of New York, Blue Bloods are luring humans to clinics to drain their blood, and Jack is Lucifer’s right-hand man.

Just when she thinks all is lost, Schuyler is contacted by a familiar friend―the Silver Blood, Kingsley Martin. The Kingsley Martin from her world. He remembers the Schuyler she used to be… but he also has a theory, and it’s one she doesn’t like.

There is a lot of backstory to catch up on in After Life if you are not familiar with the series, but there is no one better to catch you up than author Melissa de la Cruz and protagonist Schuyler. From page one, the reader learns – in summary form – of Schuyler’s triumphs against Lucifer in previous books. Readers also learn that Schuyler is the only person in this universe or any universe that can defeat him. The weight of the world is, quite literally, on her shoulders.

After Life starts out very Schuyler-driven– most of the chapters are dedicated to her and written from her perspective. However, later chapters are written from others’ perspectives, including Kingsley, Oliver and Max. This shakes up the story and the reader’s experience in an exciting way. The characters also do not take routine turns occupying separate chapters – it is very much a mixed bag and you are not sure whose perspective might spearhead the following chapter. The author does a thrilling job of changing it up seemingly at random except that the story and dialogue always propels the story forward in a thrilling, unexpected, and often juicy manner.

Speaking of juicy, the character dynamics in After Life are particularly juicy. While Schuyler deals with the new “Jack” in this universe, Kingsley attempts to come to terms with Max being a sort of reincarnation of Mimi, his love from prior novels. There is also Schuyler’s complicated relationship with her best friend Oliver who also acts as her Familiar. Not to mention that we are generally talking about vampires which often makes any such story worth biting into (pun intended). There’s a lot to unpack, but the pace assists in moving the reader through key themes and events in the Blue Bloods novels, as well as After Life alone.

After Life is full of fictional history, mythology, action and intrigue. Vampires and different vampire factions definitely make pandemic times much more thrilling and Schuyler’s mission to expose the corruption behind the clinics is a great plot and character goal. Kingsley’s theory in this book is that Schuyler was sent to the alternate universe that they occupy to defeat Lucifer… again. While it may sound repetitive, this battle with Lucifer is couched in an entirely new setting, namely pandemic New York. The character parallels and tension created by who-remembers-what also keeps the drama at an all-time high.

Another factor that I found particularly notable is the sophisticated articulation of the action scenes. Melissa de la Cruz is a master at writing action scenes in a way that feels like you are watching them on television. The anticipation, movement, reaction and even specific choreography translates beautifully on the page. This is an artform in itself and something that I found both striking and entertaining.

After Life is a juicy and intoxicating read that will reunite Blue Bloods fans with character-favorites while also introducing them to new ones in an all-new dimension. Readers new to the series may be inspired to dive into the earlier books after reading After Life. A strong, half-human, half-vampire, female protagonist out to save the multiverse while dealing with complicated relationships on the side? Vampire drama at its finest.