Roseanne A. Brown’s Serwa Boateng’s Guide to Vampire Hunting is better than Dracula. In the gripping and action-packed middle grade novel from the Rick Riordan Presents imprint, Serwa Boateng’s Guide to Vampire Hunting gives new depth and exploration to vampire stories which has not been seen since the classic tale of the blood sucking count appeared over a century ago. 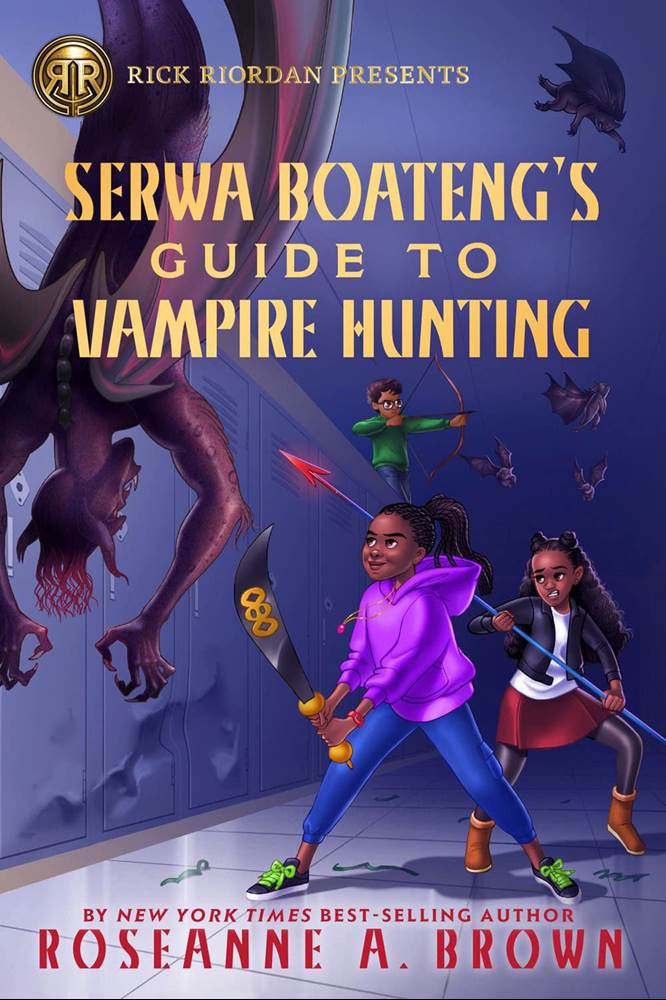 Brown’s book brings readers into a world with a rich cultural connection to Ghanian mythology and the folklore of vampires. Serwa Boateng follows her parents around the world as they chase adze (vampires), slaying them before they bring chaos to the world. Trained by her parents to be a great fighter, Serwa wants to become a slayer herself, but her parents constantly stall her wishes.

When the family’s safety is compromised at their lake house after an attack by a mysterious figure named Boahinmaa, Serwa starts to suspect that her parents are not telling her the truth. Boahinmaa wants the location of the Midnight Drum, so that she may free one of the most powerful black magic beings on the planet. This has world changing consequences should she be successful.

Before Serwa can put all the pieces together, she is dumped in a small town named Rocky Gorge, with her Aunt Latricia and cousin Roxy. Assured by her parents that this is for her safety, Serwa is left by her parents to wonder what is happening while trying to navigate a whole new battlefield, middle school.

Upset that she is cast off from her parents, Serwa quickly learns that Rocky Gorge Middle School could be more dangerous than anywhere else on the planet. With the help of Roxy, some new friends named Eunju, Gavin, and Mateo, Serwa must assemble her own fighting force, because there is an adze at school, and it’s hunting them.

I have never been a fan of vampire stories in the past. Even the great Dracula was never a big interest of mine, but this new look at the world of vampires thanks to Roseanne A. Brown will hook people’s interest from the very first sentence.

Serwa must deal with the standard issues of all teens, how to make friends and survive the rigors of school. Being homeschooled by her parents, Serwa is incredibly intelligent, but lacks the social skills to navigate the early pitfalls of her fellow teens and teachers. While this is a story using mythology to drive the narrative, Brown incorporates multiple arcs of reality to ground the experiences of Serwa and her friends.

From the overt prejudice and bigotry Serwa must deal with from peers and her teachers to the isolation of being a person of color in a predominantly white town, Roseanne A. Brown is delivering a story of magnitude and relevance that educates readers about the awesome storyline of Ghanian mythology, and the dangers of real-world life. Are vampire influences the cause of bigotry and violence from regular people? Perhaps in some, but as Brown eloquently states in the book, some people treat others how they like, because that is how they want to treat others.

While danger is everywhere for Serwa, she makes friends with Mateo, Gavin, Eunju, and her cousin Roxy, and thanks to the circumstances of an adze being in the school, they form a fighting force to fight the evil. Having them train at an abandoned amusement park named Sweetieville is a nice touch. I wish my base of operations could be an abandoned theme park.

It’s the danger that brings the group of teens together, and without her parents suppressing her wishes, Serwa forms a team through her leadership and skill that is successful. For the first time, Serwa can see her potential, and the kid has talent. Plus, she has found a home in Rocky Gorge, and friends. This is a new accomplishment for Serwa who says that it’s her parents who go places, and she just follows.

Serwa Boateng’s Guide to Vampire Hunting is the coming-of-age story of a middle schooler who has always been told what to do and held back by her parents. Serwa is everyone who has ever had hopes and dreams, while trying to measure up to unbelievable high expectations of her parents. There is no doubt that Serwa’s mom and dad are caring parents, but there is an invisible wall that keeps the three at a distance. Brown wonderfully builds this tension throughout the book, and slowly pulls off the pieces of truth for an explosive and surprising finale.

I have read many middle grade novels, including all the Rick Riordan Presents works, and I was on the edge of my seat as this story concluded. The power and tone of the story shifts under an explosive finale, that will make readers question everything they have learned, and wonder who the villains truly are.

Filled with supporting characters like Boulder, a spirit guide who has a lot of attitude, an environmentalist god, and even a reference to Kwame Mbalia’s Tristan Strong, Serwa Boateng’s Guide to Vampire Hunting with make you feel like you have fought the good fight with Serwa instead of just reading about it.

From a tension filled opening to a riveting finale, Roseanne A. Brown’s Serwa Boateng’s Guide to Vampire Hunting is a 4 Stakes Through The Heart perfection.