Considering that Marvel’s current era of Star Wars comic books are set between the famous events of The Empire Strikes Back and Return of the Jedi, it was clear that we had to get to the construction of the second Imperial superweapon known as the Death Star sooner or later.

That’s why it wasn’t too much of surprise when last month, in issue #26 of the flagship Star Wars title’s second canon volume, we were introduced to a couple of Imperial defectors who (while secretly working for Lady Qi’ra criminal organization Crimson Dawn) plan on informing the Rebel Alliance of the existence of Death Star II. Now, in Star Wars #27, this couple (whose unlikely names are Melton and Bevelyn– sure, it’s A Galaxy Far Far Away, so why not?) have stolen an Imperial Lambda-class shuttle and murdered the ISB officer originally scheduled to fly aboard it. The wily Moff Jerjerrod quickly catches on to the scheme and scrambles TIE fighters after the shuttle, but the married couple– whose two frightened children are also on board– make the leap into hyperspace at the last moment and escape. In the confusion they manage to get a message out to the Rebellion, though clearing the red tape at the opposing faction proves to be more difficult than they had first pictured and Lando Calrissian is, naturally, immediately convinced it’s a trap. They wind up on the familiar-looking river moon of Al’Doleem (first spotted in the 2017 Star Wars: Darth Vader comic run, also written by this issue’s talented scribe Charles Soule), where the Empire appears to be doing some sort of excavation. Swiftly realizing they’ve gone from the frying pan into the fire, Bevelyn and Melton fight off some more TIEs and jump to Coruscant, where Melton tries to come up with a plan. It’s a pretty straightforward yarn, used mostly as an excuse to get to know this newly introduced couple, and it is pretty interesting to spend some time with two Imperials who have decided to jump ship. Not so clear is what Crimson Dawn might get out of all this (other than furthering Qi’ra’s plan of simply sabotaging the Empire in any way possible), but we do get to see things from the Rebellion’s perspective a bit. General Hera Syndulla (from the animated series Star Wars Rebels) makes a brief cameo appearance, and we learn how the Rebel Alliance sifts through potential intelligence hits at everyday briefings. I was going to complain– as I occasionally do– about the prominence of Luke Skywalker’s face on the cover of this comic, but that actually does pay off pretty well by the final page, so artist E.M. Gist has an excuse this time around. I’ve also adjusted a bit more to the interior art by Andres Genolet, which felt a little too cartoony for me last month but now seems appropriate to the tone of what Soule is apparently going for as the title’s writer. I love Genolet’s depiction of the shuttle escape pod’s crash in Coruscant’s lower levels and the ensuing crowd of underworld dwellers that surround it, accentuated by Rachelle Rosenberg’s moody colors. Additionally, I’m pretty excited by the prospect of what the rest of this arc will bring, especially considering the direction we should be headed as the events of Return of the Jedi draw ever closer. 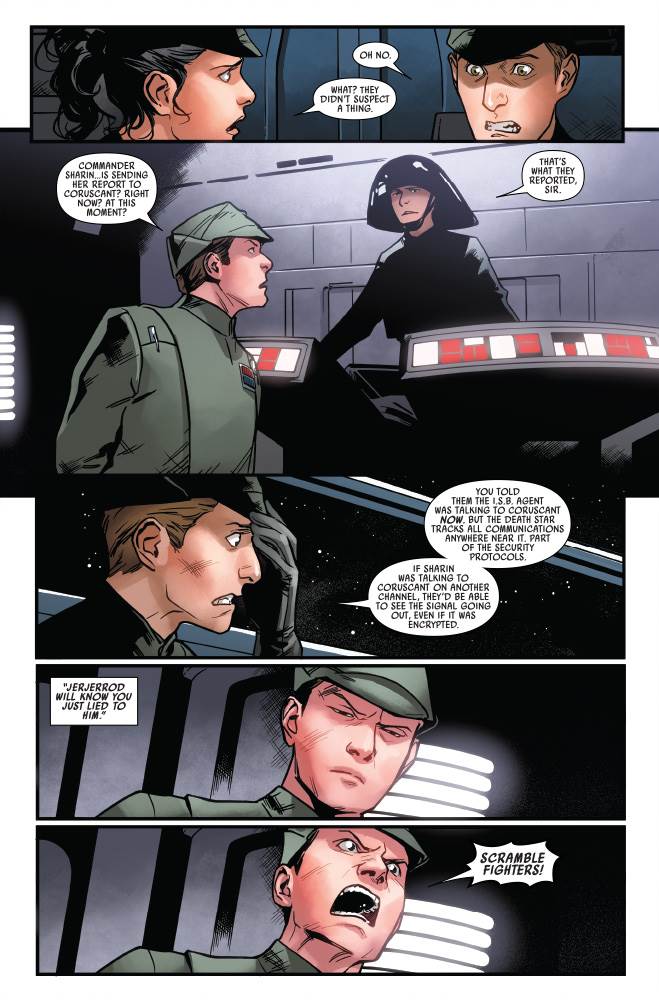 Star Wars #27 is available now wherever comic books are sold.