Empire of Light is a poignant and touching journey of one woman trying to stay in control as she battles mental health issues amidst the political climate of 1980’s Britain. Sam Mendes has written one of his most personal films in years channeling his mother’s own struggles to shine a light on mental health in a gentle and respectful way. 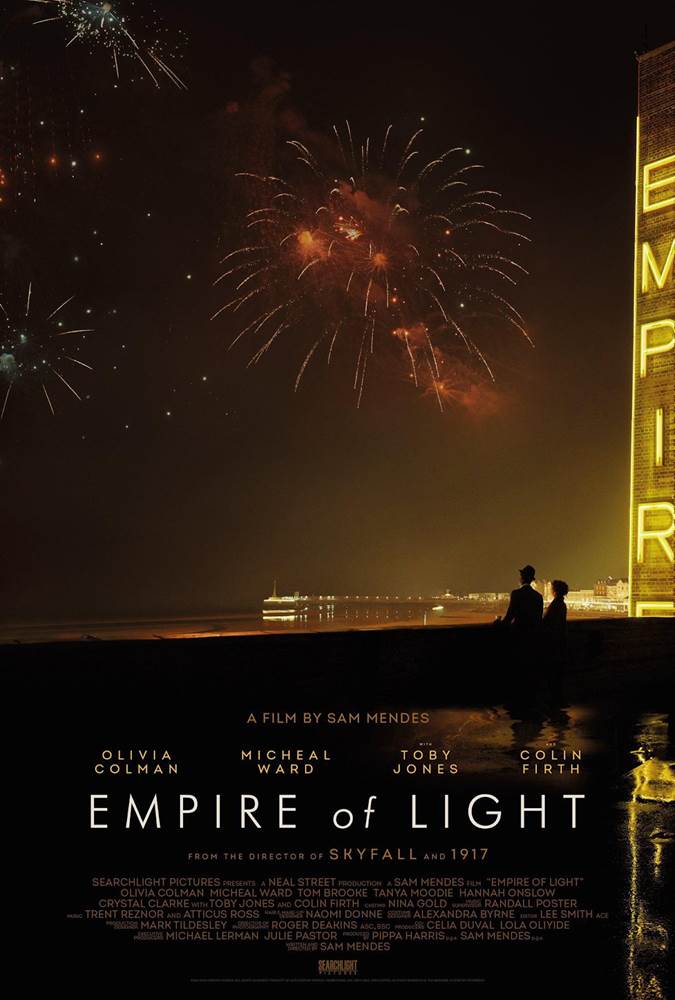 Hilary (Olivia Colman) works at the Empire Theatre. It’s 1980, and Hilary has just returned to work from spending some weeks at the local hospital. She meets with her doctor, and they discuss her health and how her lithium medication is helping her to be stable.

Work is routine except for an affair she is having with the manager Mr. Ellis (Colin Firth). The appalling nature of her affair and work is made better when Stephen (Michael Ward) starts a job in the theatre. They bond and soon their friendship turns to an intimate relationship. Everything seems to be great and so Hilary starts to skip her medication. She even breaks off the affair with Mr. Ellis. As good as life can be, the cracks in Hilary’s veneer shatter, and during the premiere of Chariots of Fire at the theatre Hilary tells Mr. Ellis’s wife about the affair.

Forced back into the hospital, Hilary returns to the Empire Theatre trying to put her life back together. The relationship with Stephen is over, but after watching him be brutalized during a white supremist attack, something changes in Hilary. She visits him in the hospital and is inspired by Stephen to watch a film for the first time. All those years working at the Empire Theatre and Hilary never once watched a movie. The projectionist Norman (Toby Jones) plays Being There and for once Hilary has finally taken in the magic of film.

Empire of Light is a magnificent and heartfelt look at one person just trying to get by. Hilary has a mental health issue that is debilitating, while the lithium she takes helps, it alters her personality. She is happy with Stephen and chooses to go off the medication because she is so content. Things are bound to go wrong, but what Mendes does with his script and Colman with her performance never shames Hilary for her choices.

As I sat in the audience watching this story unfold, I felt empathy for Hilary. I wanted her to be okay, and to be happy. While Mendes gives the character the strength to carry on, he reminds his audience that mental health issues are not a joke. He never insults, nor does he mock the issues that Hilary has, but rather celebrates the unbelievable strength it takes for her and many others to just function in everyday society.

Olivia Colman has proven her talent in multiple roles, but here as Hilary she makes her performance a riveting powerhouse of quiet raw emotion wrapped up in a desire to just live. Hilary is a normal person, who can hold down a job, have friends, and even relationships. There is no shame in the demons that Hilary fights. That’s what audiences will remember long after the film ends.

Michael Ward masterfully displays the compassion of the character through his relationship with Hilary. Stephen is the one person who tries to understand Hilary, who wants to help, and even loves her. When the worst of Hilary’s illness is causing her to shut the world away, Stephen is still there trying to help. He doesn’t judge her, ignore her, or even try to forget her. He is our model of what to do. This is a man who displays the dearest and best parts of the human spirit. It is Ward’s thoughtful, stoic, loving portrayal that helps the audience connect to what is happening in a personal way. Everyone can be Stephen, and Michael Ward makes us think of what we would do if we were in his shoes.

While the personal relationship is playing out, there is a softer but continued presence of what the power of film does. The ability to see a variety of stories played out at a movie theatre brings people together. The collective gasp at a scary part, the joy at the hero’s success, or the tears at an emotional part of a story shared with others is like nothing else in the world.

Sam Mendes is telling a story in Empire of Light that cautions us to care for others as human beings. To not prescribe a label on someone because of mental health issues, and to remind us that so much joy can come from sitting in a movie theatre.

Empire of Light will be nominated for multiple awards. Mendes and Producer Pippa Harris for Best Picture, Director, and Screenplay, Olivia Colman and Michael Ward will be up for acting nominations, Atticus Ross and Trent Reznor will be nominated again for their beautiful and haunting score and Sir Roger Deakins is sure to nab a cinematographer nomination.

Deakins has brought this film to another level of excellence with his lighting choices which highlight the neon brightness of the Empire Theatre to the grey confusion of the mob attack. Empire of Light is a feast in visuals, sound, performances, and for cinema.