There’s more to love about Thor: Love and Thunder with the film’s release on 4K Ultra HD and Blu-ray. From director Taika Waititi, the fourth stand-alone Thor film brings back Jane Foster while introducing a new villain from the comics. Not only does the film look incredible in these formats on your home theater, but the exclusive package of bonus features take you behind the scenes at Marvel Studios to learn why this film rocks harder than than the others. 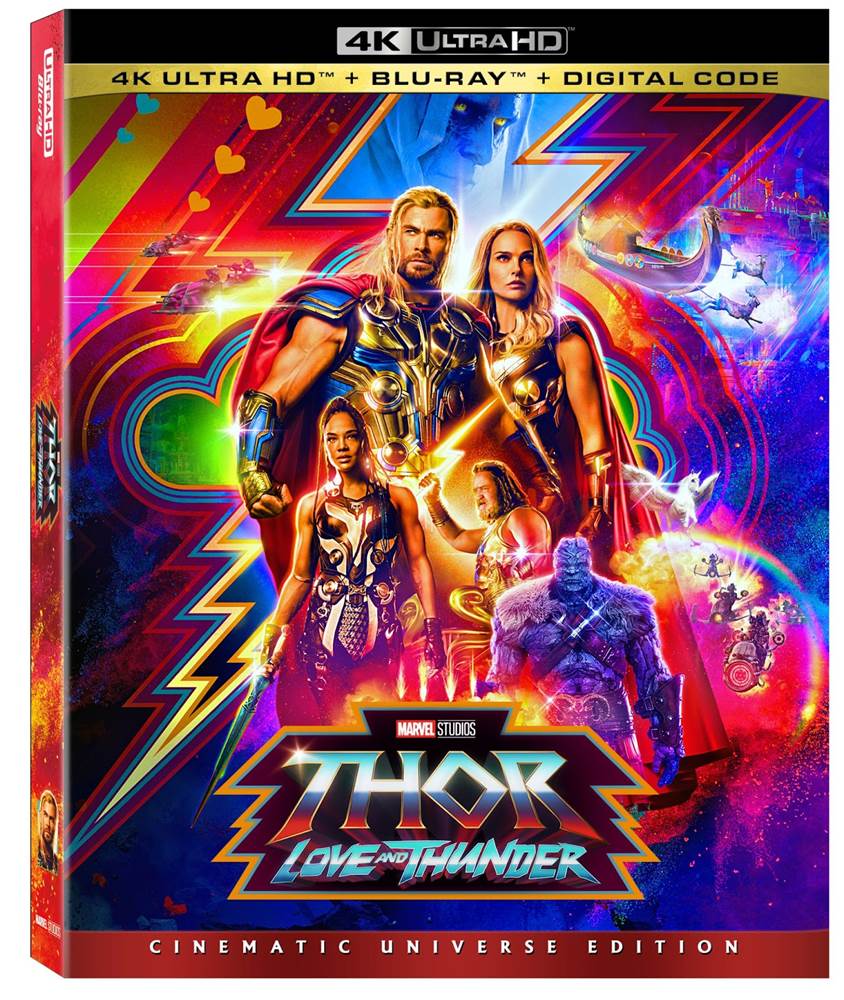 Gorr the God Butcher (Christian Bale) is on a quest to, well, butcher the gods. It’ll take a band of superpowered heroes to stop him, including the God of Thunder Thor (Chris Hemsworth) and his friends King Valkyrie (Tessa Thompson) and Korg (Taika Waititi). Oh yeah, and his ex-girlfriend turned Mjolnir wielder Jane Foster (Natalie Portman), aka The Mighty Thor. And maybe Zeus (Russell Crowe) as well. It’ll all be fine, right?

Thor: Love and Thunder has screaming goats, the Guardians of the Galaxy (all of them), and an awesome soundtrack that makes Guns ‘N’ Roses feel right at home alongside Abba. The bonus features lacks an immersive behind the scenes documentary and most of the featurettes feel like excerpts from the Disney+ exclusive Marvel Studios Assembled: The Making of Thor: Love and Thunder. But what you won’t find anywhere else is Taika Waititi’s feature-length commentary track, which is hilarious and insightful.

This review covers the “Cinematic Universe Edition” which includes the film on 4K Ultra HD and Blu-ray, plus a digital copy.

Both discs feature the original theatrical ratio of 2.39:1 (the IMAX ratio version is only on Disney+). The UHD presentation is as crisp and detailed as you’d expect from a 2022 CG epic. The film’s bold comic colors look glorious in HDR, the the transfer is equally skilled at handling the more muted palettes in the film, including the black-and-white moments in the shadow realm. The Blu-Ray looks fine on its own, but there is an obvious loss of detail and constraints on colors in that format.

The standard audio mix on 4K UHD is a 7.1.4 Dolby Atmos mix, which not only makes excellent use of the full sound field through sound effects and score, but also places you in the center of the rock and roll soundtrack. Additional audio options in 4K include a stereo descriptive audio track, French Dolby Digital 5.1, plus Spanish and Japanese 7.1 Dolby Digital Plus (the latter option is not advertised on the package). The Blu-Ray swaps the Dolby Atmos mix for 7.1 DTS-HDMA, with both French and Spanish language options in 5.1 Dolby Digital (there’s no Japanese option on the Blu-Ray disc).

Thor: Love and Thunder comes housed in a standard black Ultra-HD case with disc holders on both sides of the interior. The 4K disc contains artwork while the Blu-Ray disc is a standard blue with white text. Inserts include a digital copy code through Movies Anywhere that also earns points through Disney Movie Insiders, a flier for Disney Movie Club, and an ad for Disney+. The initial release includes a holofoil embossed slipcover. The main menu of both discs features an animated version of the film’s main poster set to score. There aren’t any trailers.

Thor: Love and Thunder matches the comedic tone of Thor: Ragnarok (also directed by Taika Waititi) while adding a more grounded emotional element to the story. The film looks amazing on both 4K Ultra-HD and Blu-Ray. The star bonus features are the deleted scenes and audio commentary, with the brief featurettes feeling more like a teaser for the Disney+ documentary Marvel Studios Assembled: The Making of Thor: Love and Thunder.