Welcome back to another round of therapy notes from The Patient, courtesy of FX. This 7th episode is titled “Kaddish,” the Jewish prayer that Dr. Alan Strauss mentioned to his captor/patient Sam Fortner in the previous episode while trying to convince Sam to leave the body of the young man he just murdered somewhere the family could find it. During a rare moment alone with Elias’ body, Alan stuffed a note in the boy’s throat that he hopes will be found and lead to his rescue. And with that, we dive into this week’s episode recap. 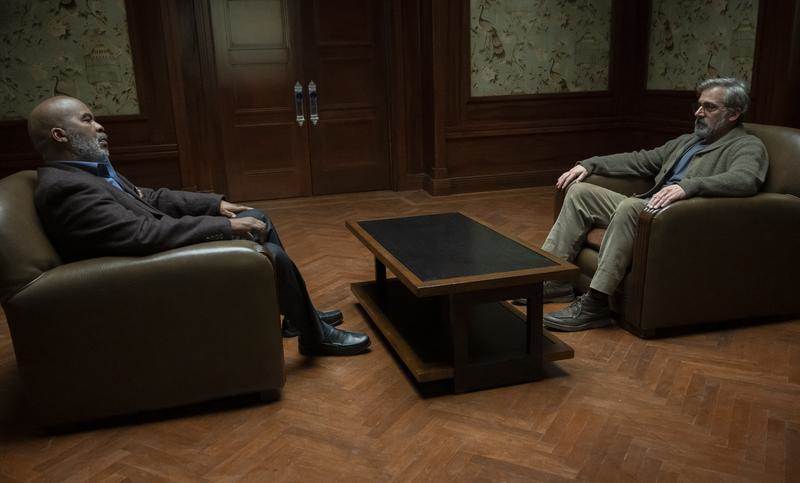 Dr. Alan Strauss (Steve Carell) continues to have visions of himself in a concentration camp, watching some of the holocaust prisoners form a circle to say the Kaddish. Snapping out of it, he next imagines a SWAT team breaking through the sliding glass doors to rescue him, before entering an imaginary therapy session with his deceased therapist Charlie (David Alan Grier). Alan talks to his therapist about how Sam is out there putting Elias’ body somewhere and the note will either be found by the coroner, after which he will be rescued, or it will become dislodged and Sam will find it, returning to murder him. Charlie suggests that Alan look at this as his most interesting case and Alan jokes about how he could write a book. He tells Charlie about his concentration camp dreams and tries to decipher it. “I’m a Jew, I’m trapped in the basement with a killer who wanted to recite the Kaddish.” Charlie says what Alan should be focusing on is not what the dream means, but what actions he can learn from it. 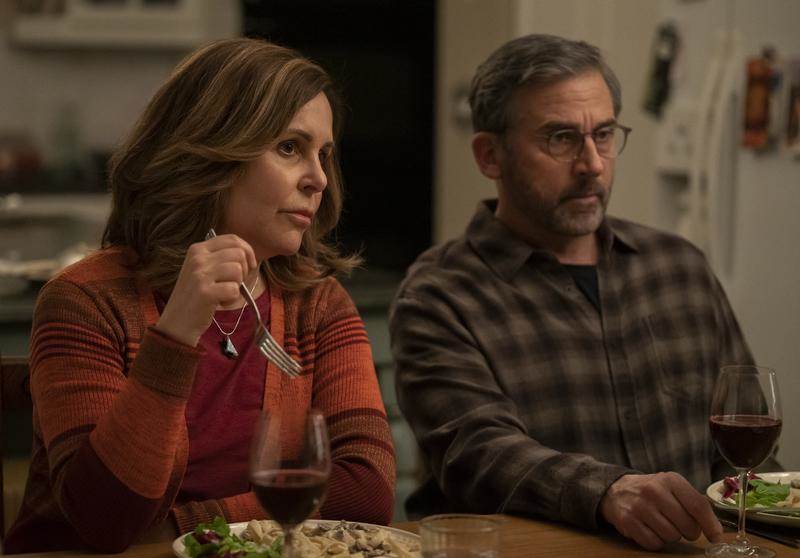 In bed, Alan has a memory of the day his son Ezra (Andrew Leeds) came home from college to announce that he was becoming Orthodox. Ezra tells his mom Beth (Laura Niemi), who is a Cantor, that she doesn’t have an authentic relationship with God. Alan’s memory then jumps to Beth on her deathbed, their daughter Shoshana (Renata Friedman) at her side, but Ezra is absent. Alan gets out of bed and moves as close to the glass sliding doors as the chain on his ankle will allow. He tries to recite the Kaddish, but he can’t remember all of it. Sam Fortner (Domhnall Gleeson) comes home and asks what Alan is doing and he tells him he can’t remember the prayer. Sam sits in the La-Z-Boy chair, telling Alan he wants to talk to him. Alan tells his patient that he’s exhausted and gets in bed. Sam stares for a moment in disbelief before going to his room and closing the door. The next morning, Alan wakes to the sound of Sam’s truck driving away. 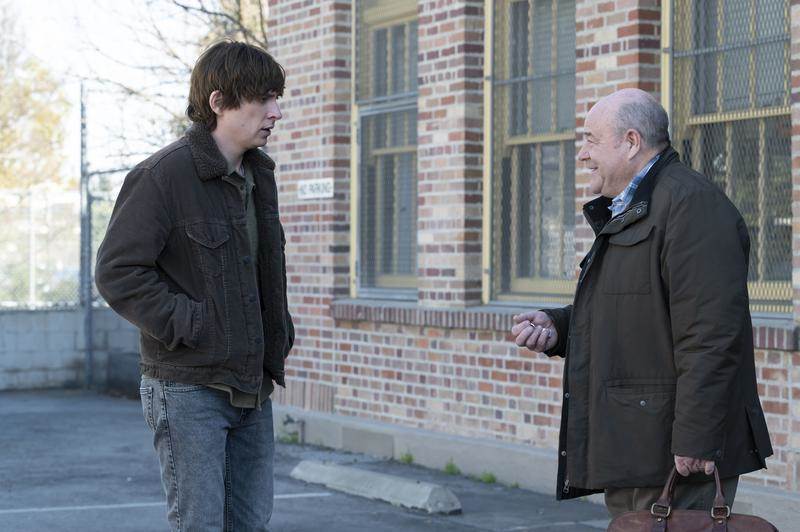 Sam visits his old school, waiting on a bench until Mr. Buchella (Michael Dempsey) exits the building. He approaches and brings up an event where another teacher had a rageful outburst and the school psychologist calmed him down. Sam recalls that this teacher wasn’t at the school anymore the next year and asks if Mr. Buchella had anything to do with getting him fired. “Yeah, I did,” he admits. Sam announces that his life isn’t good, that things aren’t working out for him, and asks his old school psychologist if he knew that this would happen. “You always hope things will turn around,” Mr. Buchella tells Sam. “Can you be my therapist?”, Sam asks, which catches Mr. Buchella by surprise. He tells him that he’s never taken a patient outside of school hours who wasn’t a current student, but that he will consider it. He hands Sam his number and asks him in a few days. As Mr. Buchella gets into his car, Sam asks about the benefit of a patient living with their therapist. “That would not be a good idea,” Mr. Buchella says.

After night falls, Sam sits in his truck and calls his ex-wife Mary (Emily Davis), asking her if she ever thought anything was wrong with him. “I think there were all kinds of things wrong with you,” she admits. “Your whole life revolves around food. I was never positive you loved me. I know you loved me, but I mean, love-loved. But overall, I know you’re a good guy.” Sam says goodbye and ends the call. He gets out of his truck and we see that he has parked on a bridge over a river. He goes to the railing and looks down at the rushing water.

Alan stares at the darkness through the glass doors, imagining a SWAT team breaking through it to rescue him, or rushing down the stairs. He has another memory of looking outside from his upstairs window and seeing Ezra with his sons Dov (Paxton Booth) and Menachem (Luke Dodge) riding their bikes up to the door. When he goes downstairs, Beth leads the boys into the house and Alan steps outside. Ezra is already on his bike heading back to his house. He didn’t attempt to say hello to his father. In the next memory, Alan stops by the shipping store Ezra works at with his father-in-law, Chaim Benjamin (Alan Blumenfeld). When Ezra opens the door to the back office, Alan sees cute drawings Dov and Menachem made for their grandpa, but he doesn’t have similar gifts from his grandkids.

Cut to Alan in an imaginary session with Charlie complaining about the difference between how Ezra treats his in-laws versus his own parents. “Ezra has chosen this ridiculous life. He’s left us all in the dust. That whole family, his in-laws, they are over at the house constantly helping with the kids, waiting on them hand and foot. It’s like they’re all living together in a shell. Whenever we visited, we were like second-class citizens. We were somehow not Jewish enough.” He brings up the day Beth passed away and how much pain she had been in from her cancer. The plan was for the whole family to be with her when she took a pill that would help her pass away to relieve the pain, but Ezra told them this went against God’s plan. After disrespecting his mother’s wishes and leaving, Alan chased after him and Ezra went on a rant about how his parents never supported him. Charlie tells Alan that it sounds like they both were grieving for Beth in different ways, but Alan says that Ezra always had to have the last word and prove himself to be right, even when he was a child.

Alan switches from patient to therapist when Sam returns. He has a big box with him. “I’m going to print that prayer you can’t remember from the internet,” he announces, showing the printer he purchased and going into his bedroom to start setting it up. Alan thanks Sam and says that this is empathy. “You put yourself in my shoes, you saw what I needed, and you did it for me,” he compliments his captor. As Sam works on setting up the printer, Alan tries to mentally prepare Sam for what will happen when Elias’ body is found, saying he will likely have a range of complicated feelings when he first sees it on the news. “It won’t be on the news, Dr. Strauss,” he says, rendering Alan speechless. “I didn’t do what you told me to do. I was on the way to do it, I had a good spot picked out where they’d find him. But… I was almost there, and this truck pulled up to me at a stop light, and I can see the driver just looking down into the bed of my pickup where the body was wrapped up. And I just thought if this is on the news tomorrow and that driver remembers seeing something or remembers my pickup… so I didn’t do it. I know it wasn’t empathetic.” Alan looks hopeless as he asks Alan what he did with Elias’ body. “I put it somewhere,” Sam replies, dehumanizing Elias. “No one will find it.” Sam comes out of his bedroom with the printed Kaddish and hands it to Alan, asking if he can listen to  him recite it. Alan stares blankly at the darkness outside the glass sliding doors, which won’t be broken by a SWAT team now. “It’s private,” he says with no emotion. Sam looks equally deflated by this as he goes into his room and closes the door. 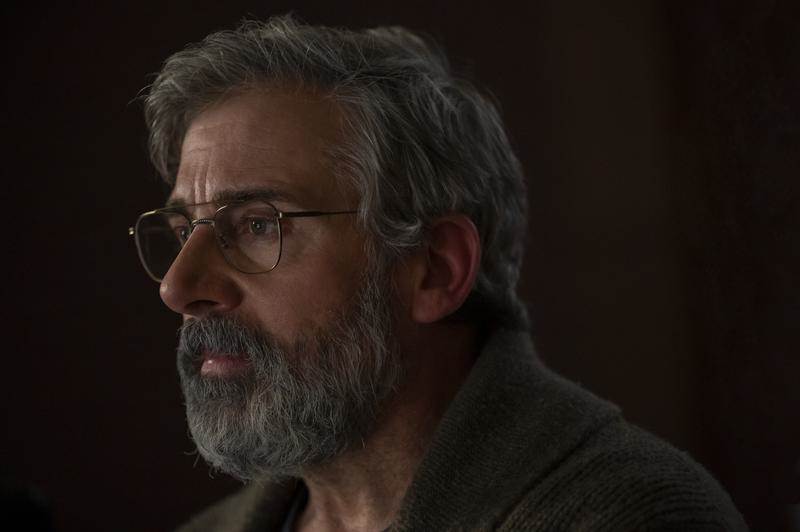 Alan slowly looks down at the paper and rises to his feet. He once again moves as close to the glass doors as his chain will allow. He begins to recite the Kaddish. We see Sam in his room, sitting on the floor with his ear pressed to the door listening. Alan begins to break down and cry as he gets to the end of the prayer.

In next week’s session of The Patient, we will learn even more about “Ezra.” Come back on October 11th after you stream the 8th episode on Hulu for another round of therapy notes. For now, here’s what’s on the agenda for the next session.

Dr. Strauss is honest with himself about his failures, past and present. A revelation about his relationship with Ezra leads him back to the urgency of escape.  Sam loses faith in his doctor. Written by Joel Fields & Joe Weisberg; Directed by Chris Long.