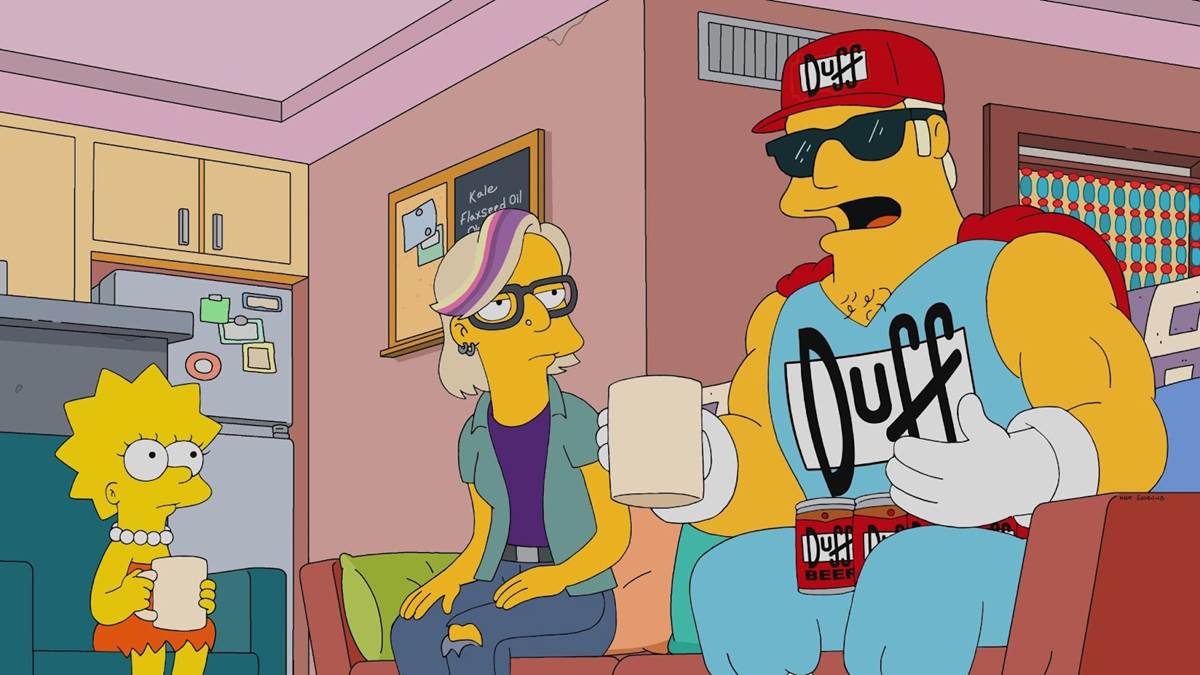 Duffman is a one-joke character that was introduced back in the ninth season of The Simpsons when it was Barney Gumble’s turn to be the designated driver among the barflies at Moe’s Tavern in the now-classic “The City of New York vs. Homer Simpson.”

And now, 25 years later, The Simpsons has been reduced to scraping beyond the bottom of the barrel in its need for supporting characters on which to focus episodes, so Duffman (still voiced by Hank Azaria) has gotten a turn in tonight’s new installment, “From Beer to Paternity”– the title being a riff on the 1950s novel and film From Here to Eternity. 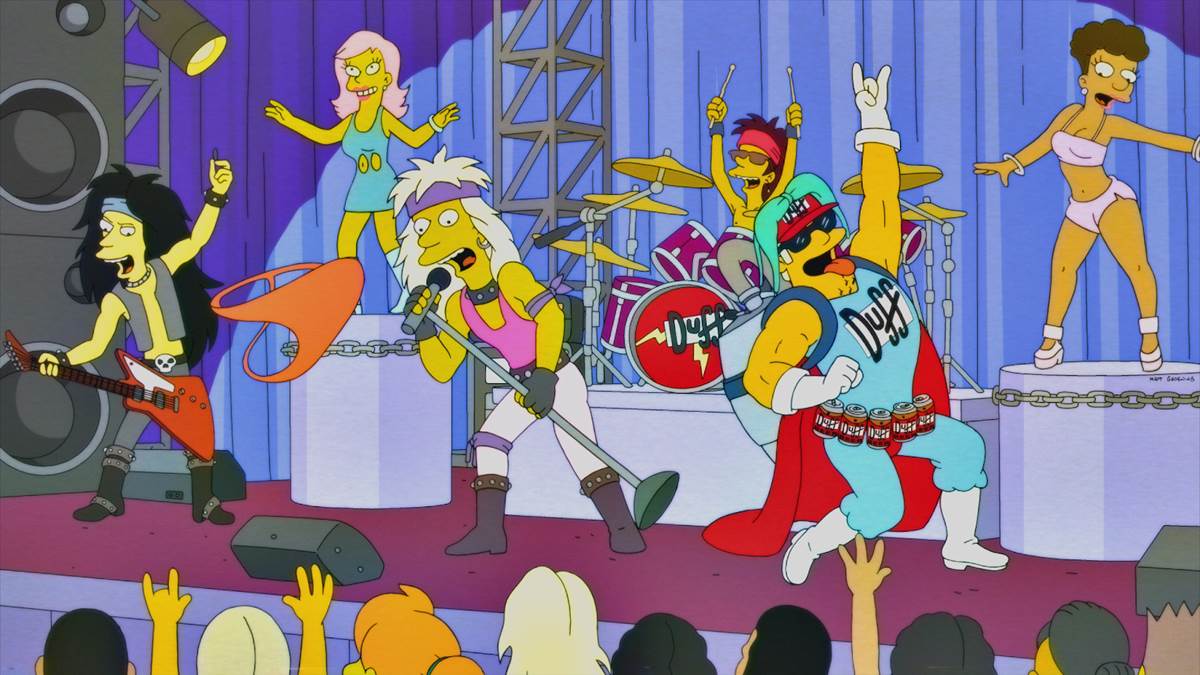 “From Beer to Eternity” begins with the Duff Beer corporation in search of a new mascot after reviewing archival footage of Duffman’s public antics from throughout the decades, engaging in behavior that would be deemed immediately cancellable by today’s standards. The company holds a vote to see who– if anyone– should replace him, and Duffman saves face when confronted about his misogynistic leanings by showing paparazzi a photo of his daughter, though the photo is actually of Lisa Simpson (Yeardley Smith) from a beer festival event that Homer (Dan Castellaneta) ill-advisedly brought his children to. Homer and Lisa visit Duffman to confront him about his lie, and Duffman asks Homer for advice on being a good “daughter-dad” because he’s so impressed by Lisa’s grown-up demeanor. It’s revealed that Duffman does indeed have his own adult daughter, though they’ve been estranged for a decade because of his nonstop partying ways, so Homer offers to take the mascot man to visit her upstate– where the Agatha Christie Museum happens to be, which provides an excellent excuse for him to invite Lisa along at Duffman’s insistence. It’s a flimsy excuse to get these characters in a car together, and to have Lisa and Homer have yet another brief falling out when he naturally fails to follow through on his promise to take her to the museum. 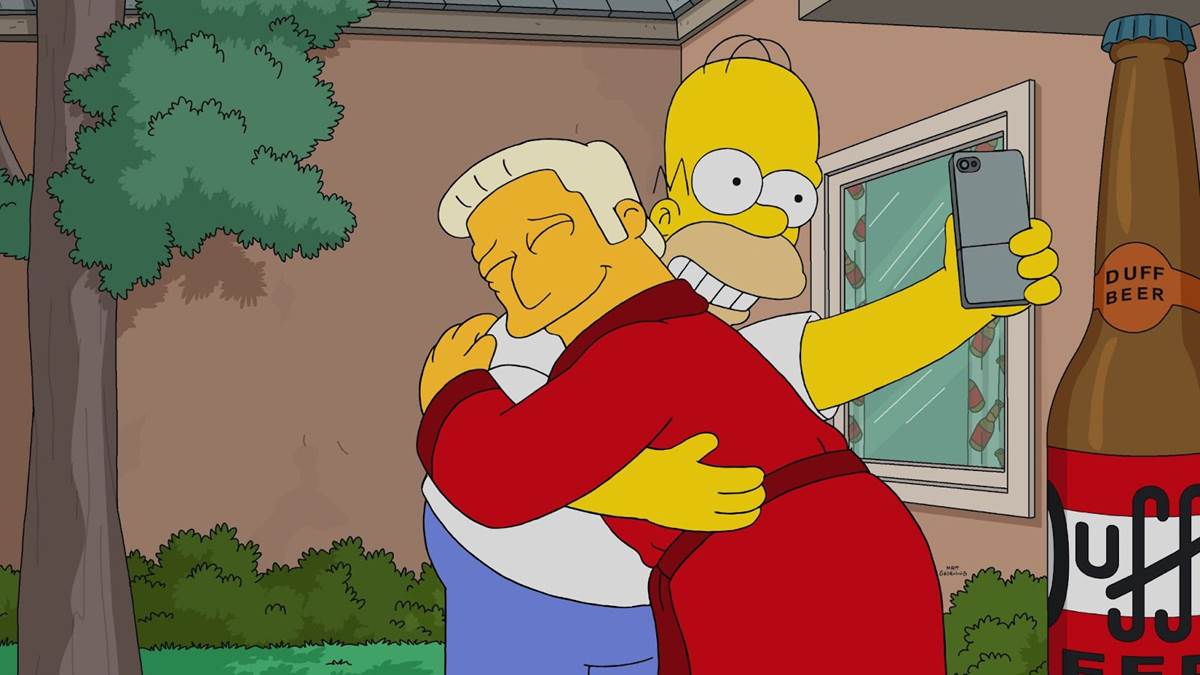 Instead they go to a corporate mascot convention so Duffman can drum up some more support in his campaign to keep his job, but there everyone is more interested in meeting the “Mucinex Loogie” and hearing Charlie Tuna give a keynote address on the dilemma of promoting an edible version of himself. Eventually Homer and Lisa make up and they do all make it to Duffman’s daughter’s home, but he can’t help but get involved in a “chicken fight” during the pool party happening in her apartment complex. The Simpson father-and-daughter pair help the Duffmans (apparently that’s actually the family’s fortuitous last name) get past their differences and reconnect thanks to a childhood drawing that Duffman himself had saved for decades, and in a mid-credits sequence we see that Homer does end up taking Lisa to the Agatha Christie Museum, though we had just learned that it would be closed for months to install a new Death On the Nile-inspired lazy river attraction. But that doesn’t really matter, because so much of this episode feels phoned-in, from the recycled-ad-nauseum Simpson family strife to Duffman’s inability to maintain ties with relative– at least Krusty the Clown (also Castellaneta) makes a joke about when we saw him reconnect with his estranged daughter, so at least we know the writers are aware they’re cannibalizing previous plots. I dunno, in the end this was just another episode that didn’t really do it for me, either on an emotional or comedic level. After the recent highs of “Lisa the Boy Scout” and “Treehouse of Horror XXXIII,” the bar has been set back to where I expect more from The Simpsons, so here’s hoping the show can get back to delivering that kind of quality on a regular basis.