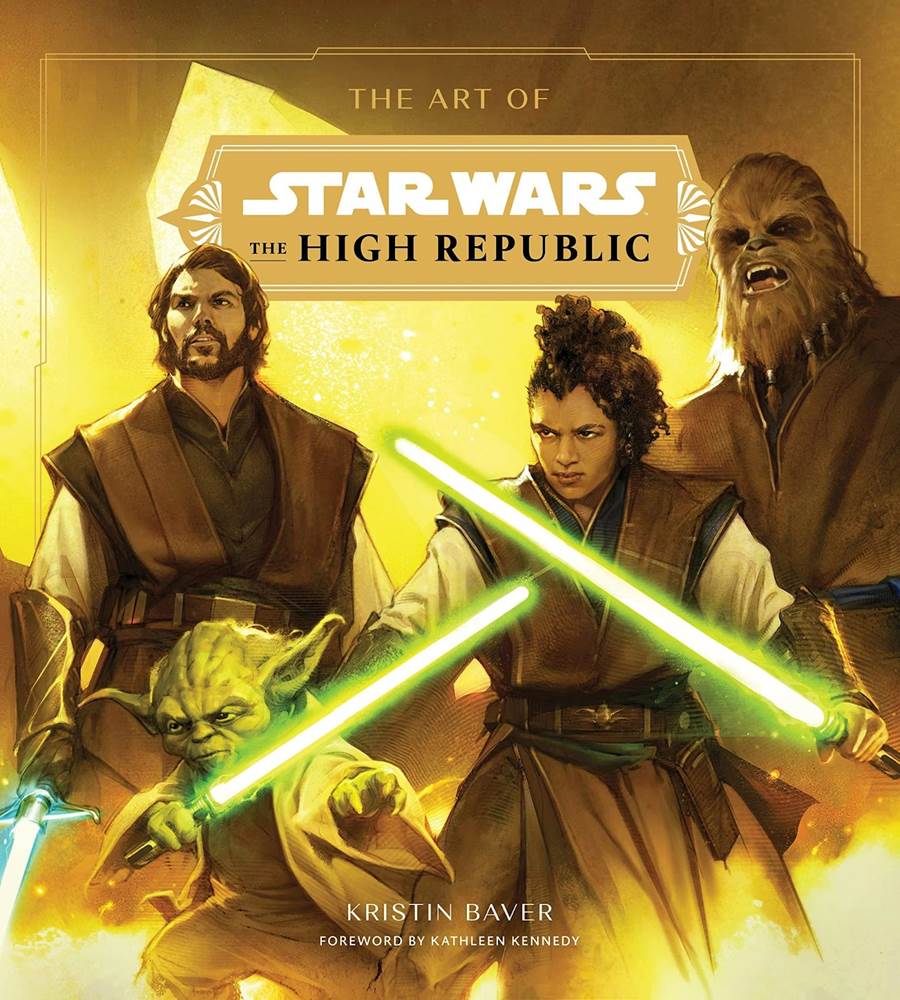 The Art of Star Wars books have been a tradition dating back decades, prime examples of how the George Lucas-created space-opera franchise only gets more interesting the more you learn about how it was made.

And the latest installment of that series, entitled The Art of Star Wars: The High Republic, is no exception to that rule. Except this iteration is not about the making of a movie or television series. The High Republic, as you may already be aware, is a relatively recent addition to Lucasfilm Publishing’s output of Star Wars novels and comic books. The High Republic takes place hundreds of years prior to the events of the Skywalker Saga (better known as Episodes I-IX of the Star Wars film series) and in this new Art of book by Kristin Baver (author of 2021’s Skywalker: A Family at War and host of Lucasfilm’s This Week in Star Wars news program on the official Star Wars YouTube channel), fans of this initiative are treated to hundreds of pieces of concept art that were generated to create the characters, vehicles, and locations of this heretofore-unexplored period in A Galaxy Far, Far Away. After a commendatory foreword by Lucasfilm president Kathleen Kennedy, Baver dives into the history of how The High Republic came to be. I think right off the bat that’s my favorite thing about this book– not only does it collect the art of The High Republic, as the title suggests, but it also serves as a fairly comprehensive behind-the-scenes chronicling of the series’ first phase. Sure, as someone who has followed (not to mention covered) The High Republic since the day it was announced, I’ve heard some of these stories before, like the writers’ retreats held at Skywalker Ranch in the days before the pandemic. But even having interviewed the authors myself, I’ve never seen the account of this initiative’s genesis organized in such detail. That’s where credit should absolutely go to Baver as this book’s accomplished author, but the rest of the accolades belong to the artists who contributed concept work, character designs, and comic-book illustrations to The High Republic from its earliest inception. 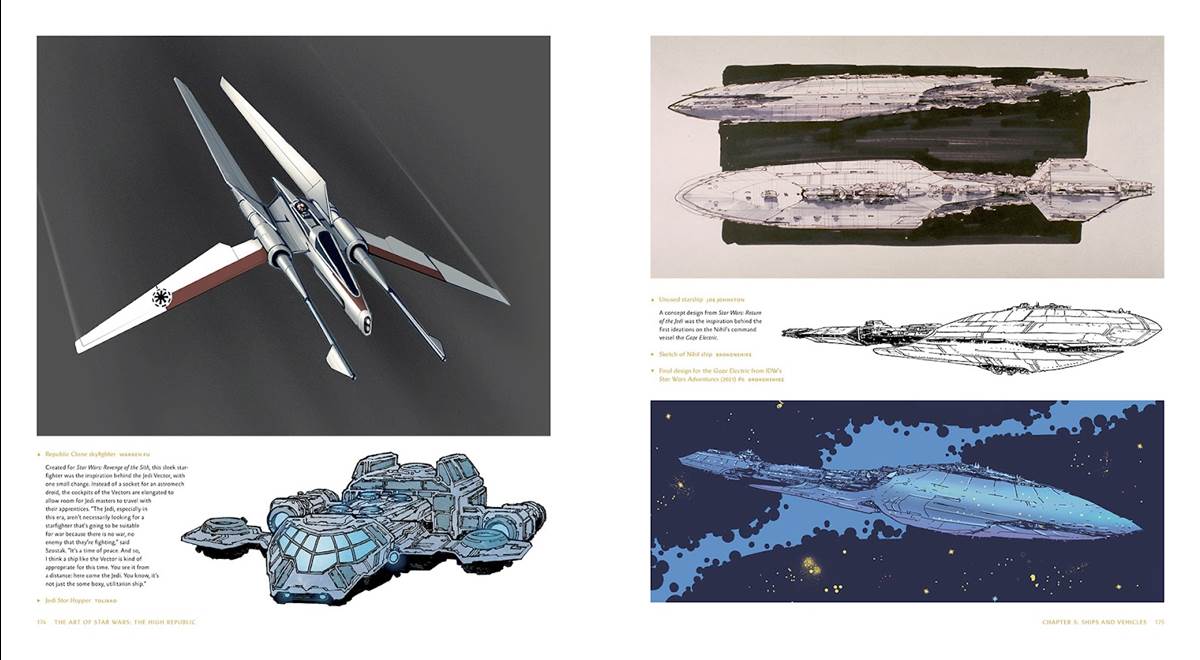 In these pages you’ll find pieces by the now-legendary artist Ian McCaig (perhaps best known as the designer of Darth Maul and Padmé Amidala’s looks in Star Wars: Episode I – The Phantom Menace), plus Phil Noto, Ario Anindito, Grant Griffin, Harvey Tolibao, Nick Brokenshire, Dave Wachter, Georges Jeanty, and a number of other talented craftspeople who helped bring The High Republic to life as a visual concept– even though the finished products were often based in prose as novel form. We learn why it was so important to have an established look for this era and its many characters before the writers sat down to compose their stories, and also how consistency was key in maintaining these appearances across the variety of media that The High Republic would occupy, which also included a virtual-reality experience and an upcoming animated series. But my favorite part of The Art of The High Republic comes in the form of memorable recollections and anecdotes from Baver’s numerous interview subjects. I loved learning about how Light of the Jedi author Charles Soule once pitched a giant version of “Baby Yoda” (who would get smaller as he aged) before he knew Grogu would be part of The Mandalorian series on Disney+. I dug McCaig’s still-unused concept of a gross-looking insect Jedi, which he says was inspired by the 1986 David Cronenberg / Jeff Goldblum movie The Fly. And I adored seeing and reading about how villainous characters and deadly creatures such as the plant-like Drengir, the Nihil marauders, and the eerily unknowable Nameless evolved over time. The bottom line is that if you’re into The High Republic, this book is undoubtedly a must-own. Getting to know the background of this project even further and enjoying the artwork contained within has only enhanced my enjoyment of the initiative and made me yet more excited for the other books and comics coming soon. The Art of Star Wars: The High Republic has already been out for a week, so you may already own it, but if you don’t, I’d suggest moving it to the top of your wish list for this holiday season. 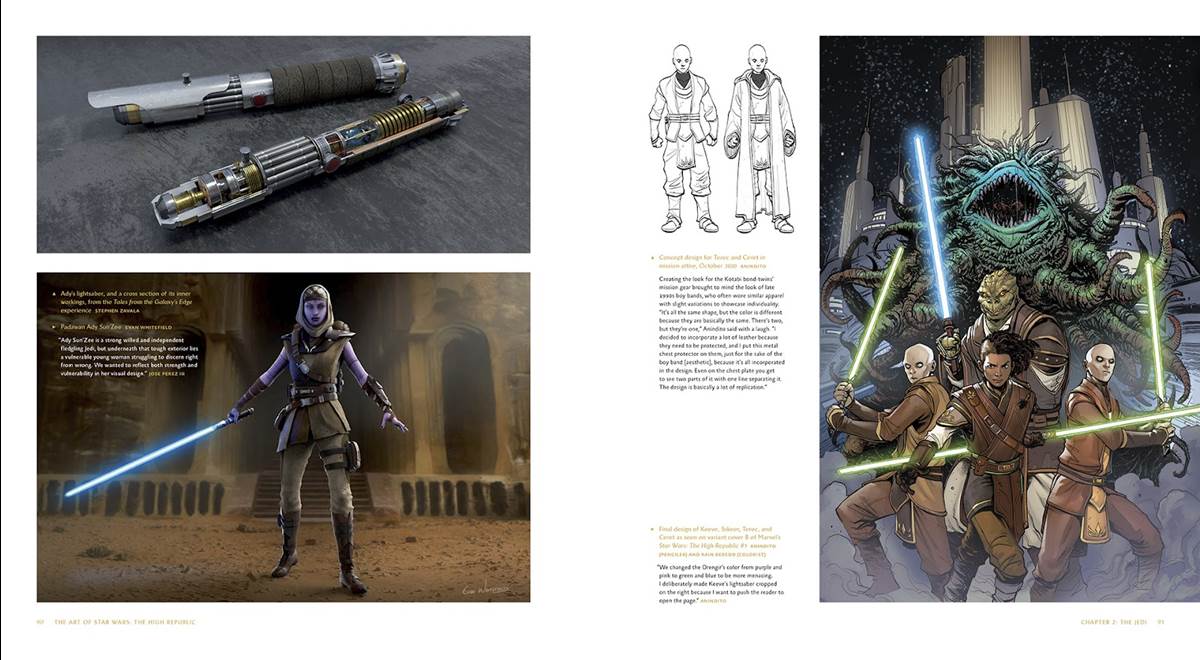 The Art of Star Wars: The High Republic is available now wherever books are sold.