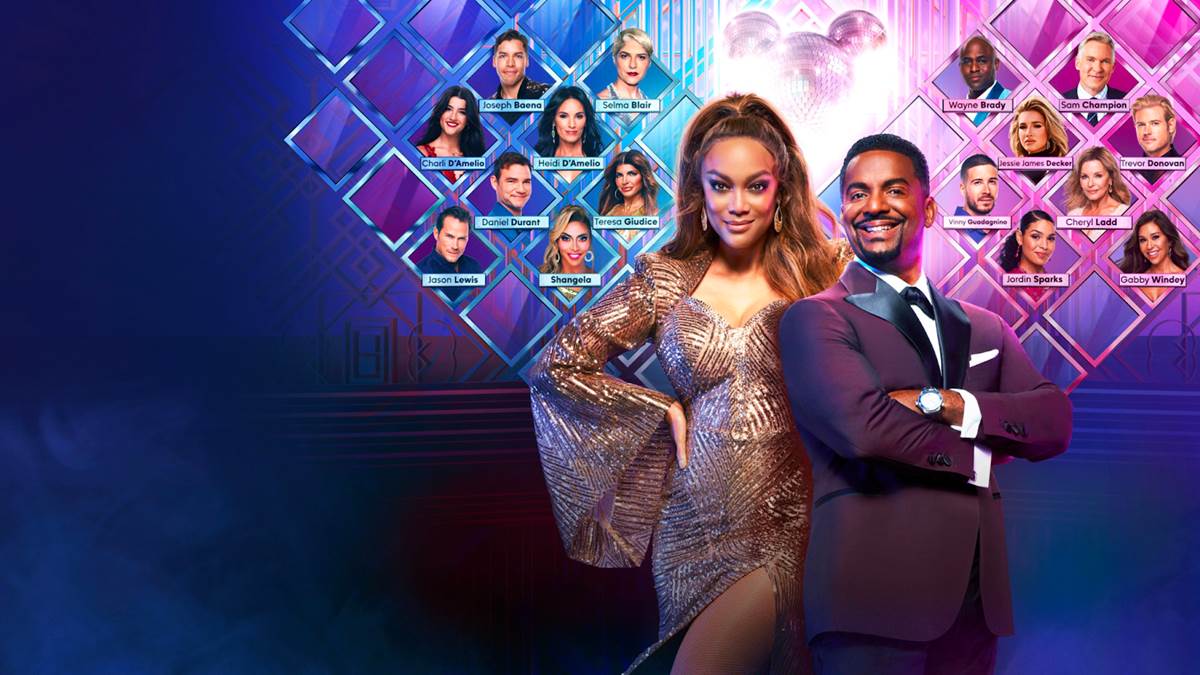 Tonight will bring us redemption dances (letting the couples redo a style of dance they weren’t so keen on their first go around), freestyle routines, and a bucket of fun. Let us all enjoy Len’s swan song and savor the final night of this phenomenal Disney+ introductory season.

After a rousing opening number and Tyra’s best dress of the season, we receive a recap of the first few weeks of competition. With that comes a medley performance of our first four eliminated competitors. (Team Cheryl until I die!) Next up, the redemption round…unfortunately the first four’s dance didn’t redeem anything.

Shangela and Gleb Savchenko – Quickstep – She has been redeemed, y’all! The footwork was intricate, the frame was amazing, the Charleston section was fun. Carrie Ann and Bruno saw a quick footwork issue at the beginning, but Len didn’t see it. He just saw vast improvement! We love Len in this house! Shangela has put in clear work this entire season and this growth was proven with this performance. More Shangela in pants, please.

Wayne Brady and Witney Carson – Quickstep – Clearly, he will redeem himself over the week he was sick. It was his lowest point all season, so it’s an obvious choice. Len was in the rehearsal room with Wayne and made sure his frame was better this go around. There was a clear issue with the pair’s synchronicity at one point during the dance, but Len was happy to see that his frame was much better. Yet, to speak in layman’s terms, the judges were bored. Len said there wasn’t enough movement within the quickstep, which is never good for a dance? I love Witney. I love Wayne. I hate boredom!

With this also being Cheryl Burke’s final season as a pro, she was given a beautiful solo send-off. Is now a good time to suggest Cheryl hosts next season? The next three to be eliminated perform a number to a Tayla Swiff song, reminding us all none of them should have gone home before Vinny. I said what I said.

Charli D’Amelio and Mark Ballas – Jive – She is the current crown jewel of the season. A technical marvel all season long, her jive was the one low point throughout the season. Carrie Ann was putting a lot of (necessary) pressure and constructive criticism on her shoulders going into the dance. The judges quickly leapt to their feet after the performance. They had nary a single bit of criticism. NOT ONE. Charli is in a league of her own.

Before Gabby, Selma Blair took the floor once again. Alongside Sasha Farber and Jordin Sparks singing live, Selma had a gorgeous return to the ballroom. If you haven’t yet, be sure to watch this minute-long dose of wholesome, gorgeous art.

Gabby Windey and Val Chmerkovskiy – Cha Cha – She’s redeeming her “rigid” Cha Cha from Bond Night. Derek wanted to see more intentional choices in this new routine and she delivered. (Gabby’s love for Bruno is palpable. She just screams every time he opens his mouth. I love it.) The judges were glowing, Len highlighting their chemistry. Wait, can Gabby and Cheryl host next season?

Our final four eliminated couples danced. Trevor is my everything. Britt Stewart is iconic. Heidi gave us nothing. Vinny was there.

Len’s judging career ending is devastating. However, Len’s parting gift being a mirrorball trophy has him actually shocked and I’m a wreck. Make Len Goodman a Disney Legend, you cowards!

Wayne Brady and Witney Carson – His Bruno Mars Super Bowl halftime show extravaganza was a swagger-fest. Len said “You’re never false,” which is such a beautiful compliment. It was fun, it was lively, it was exactly what a Wayne freestyle needed to be. Witney has been officially invited to the cookout, how exciting!

(A quick break from the dancing led into a beautiful tribute montage to Len, including an ode to DanceCenter. I thank them for that. I’m crying again. I love Len!)

Charli D’Amelio and Mark Ballas – Their freestyle was an ode to the Disney Animation short Us Again, which is much “less-concepty” than Mark’s past freestyle performances. It brought Derek to tears, Bruno loved the “celebration of dance,” and all the judges stayed on their feet the entirety of the critiques. Len was left emotional. There’s no one like Charli.

Gabby Windey and Val Chmerkovskiy – A freestyle to “Cell Block Tango” is my favorite thing to ever happen in my life. Sorry, graduating college. At the very end of the dance, her heel got stuck in her dress and it scared the ever-living crap out of me. Even with that wardrobe malfunction, this might just be my favorite dance of the season? Stunning.

Shangela and Gleb Savchenko – I have no words. The greatest freestyle in the history of this show. Gleb in drag, the judges screaming and on their feet, Shangela flew in the air, Laganja & Eureka in the ballroom, a lip sync extravaganza. Y’all, Len forgot to vote because he was mesmerized! What a moment in television history. Something so incredibly queer on DWTS was a monumental moment. Carrie Ann loved it so much, that Carrie Ann broke her gosh darn paddle!

What an incredible night of performances! Yet, I am tense. Who is going to win? I’m stressed! We have a montage of the celebrities talking, which is sweet, but it’s making me more anxious.

The winners of Season 31 of Dancing with the Stars are…Charli D’Amelio and Mark Ballas! A much deserved win for an exceptional couple.