Today we continue our rewatch of Star Wars Rebels with episodes 46 through 50 of the popular Lucasfilm animated series. Episode 46: “The Wynkahthu Job” – Ezra and the rest of the Ghost crew agree to work with Hondo Ohnaka (Jim Cummings) again, this time joined by his new partner Azmorigan (James Hong). Together they break into an abandoned Imperial cargo ship, which Hondo promises is carrying much-needed proton bombs for the Rebell Alliance to use. Aboard the ship, the heist seems to be going well until the group is attacked by reactivated sentry droids that resemble the Dark Troopers from Dark Forces and The Mandalorian. Luckily everyone manages to escape, but along the way Ezra realizes that Hondo really only cares about himself and his own wealth. 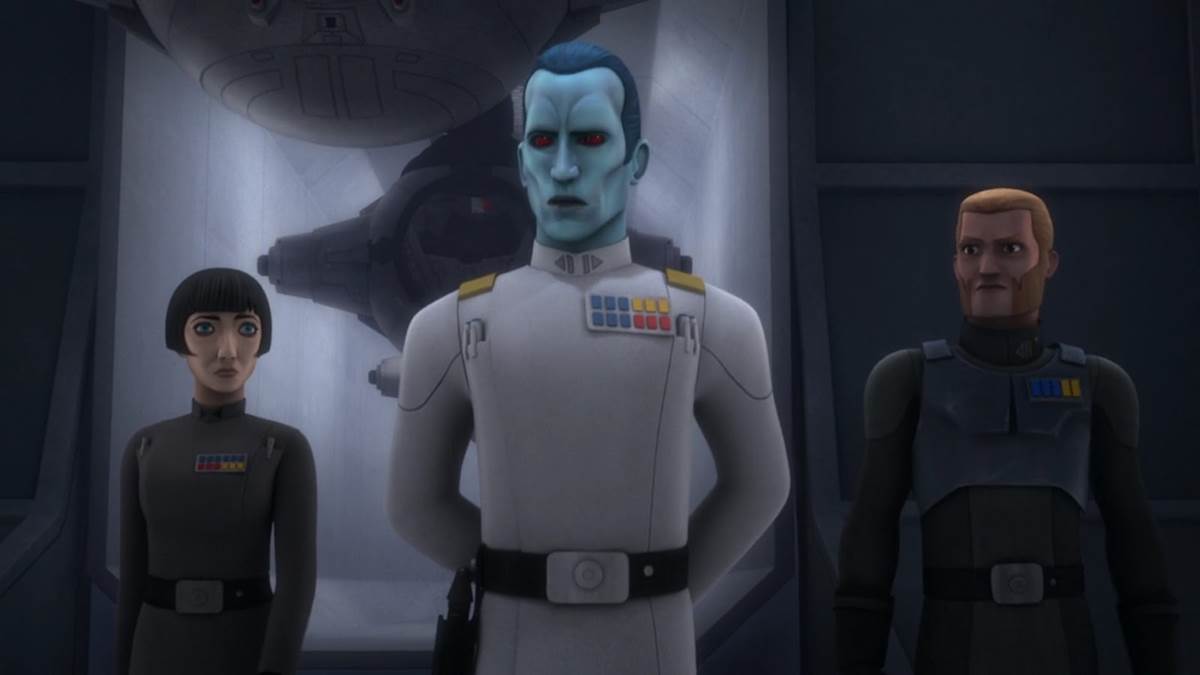 Episode 47: “An Inside Man” – Back on Lothal, Kanan and Ezra reunite with Ryder Azadi (Clancy Brown), who helps them infiltrate an Imperial factory. There, Grand Admiral Thrawn (Lars Mikkelsen) is investigating sabotage among the conscripted workers, and he locks down the facility to root out any rebel influence. With the help of Agent Kallus (David Oyelowo), who turns out to be the new spy designated “Fulcrum,” the two Jedi and Chopper manage to steal the plans for Thrawn’s new TIE interceptor design– now complete with shields! Thrawn becomes convinced that the rebels have an inside man, and heavily implies that he already knows it’s Kallus. 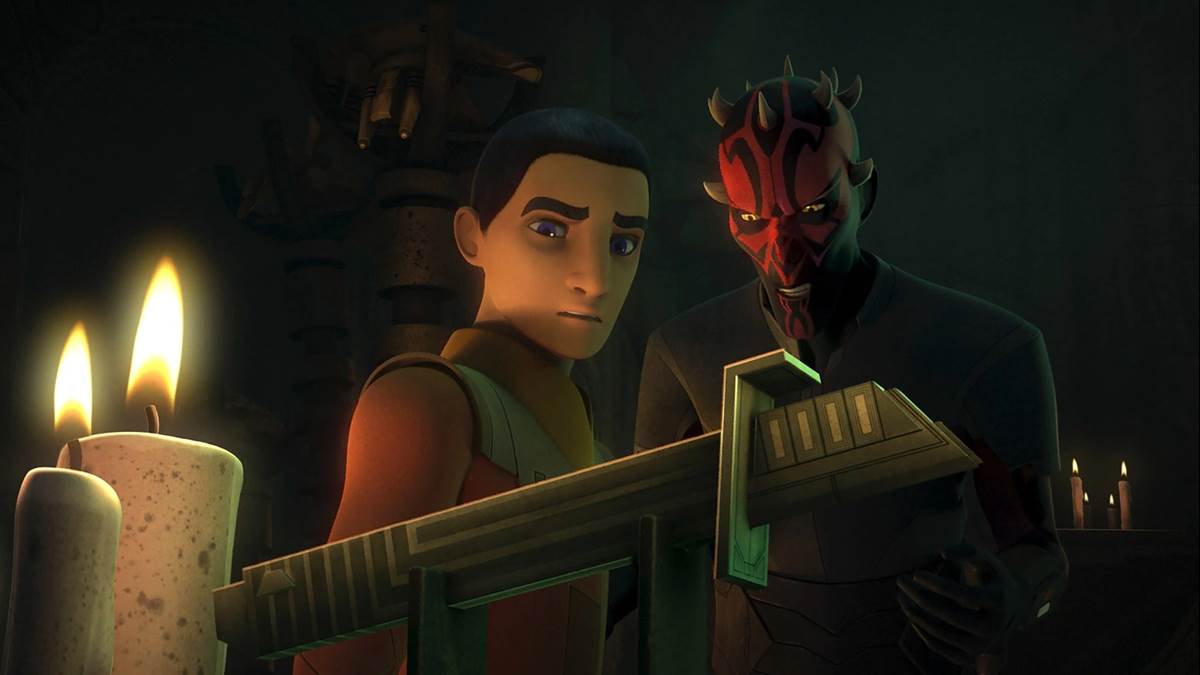 Episode 48: “Visions and Voices” – During a briefing, Ezra begins to see and hear visions of Maul (Sam Witwer), who then appear in physical form when a concerned Kanan takes his apprentice to visit the Bendu (Tom Baker). Maul persuades Ezra to accompany him to his home planet of Dathomir, where he concocts a potion to help them re-experience the Force visions they shared earlier in the season. Resultantly, Ezra learns that Obi-Wan Kenobi is still alive, and Maul discovers that the Jedi Master is hiding out on a planet with twin suns. The spell then causes them to be attacked by the vengeful spirits of the deceased Dathomirian Nightsisters, who possess the bodies of Kanan and Sabine when they come to assist. Ezra manages to free his friends by breaking the spell’s perimeter, and Sabine takes the Mandalorian Darksaber from Maul’s possession as she leaves the planet. 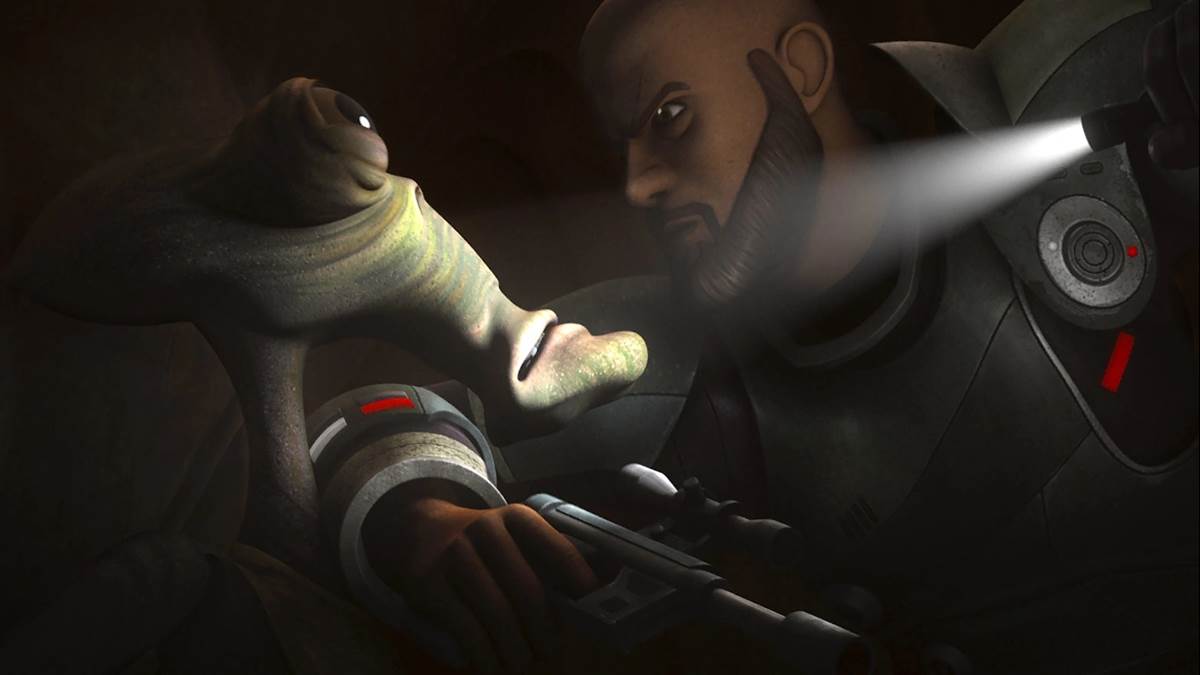 Episode 49: “Ghosts of Geonosis” (Part 1) – The Ghost crew visit the planet Geonosis (first seen in Star Wars: Episode II – Attack of the Clones) to track down a missing rebel cell led by the extremist Saw Gerrera (voiced by Forest Whitaker, who also plays the character in Rogue One: A Star Wars Story, Star Wars: Jedi – Fallen Order, and Andor). Our heroes are suddenly attacked by battle droids and destroyer droids, which were activated by a Geonosian who Ezra nicknames Klik-Klak and who appears to be the only remaining survivor of his species left on the desolate planet. When Captain Rex (Dee Bradley Baker) demands to know what the Empire was building on Geonosis, Klik-Klak draws two circles in the dirt, resembling the Death Star. 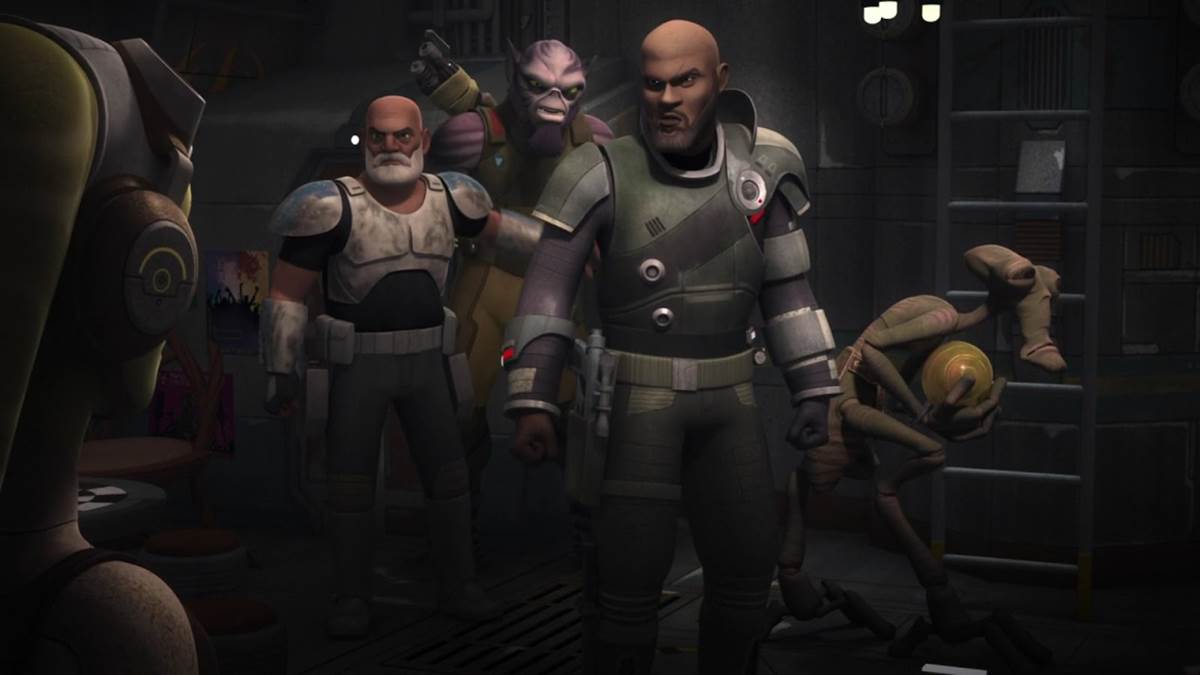 Episode 50: “Ghosts of Geonosis” (Part 2) – Klik-Klak leads our protagonists to his hidden cave home, where they find an egg that also resembles the design the Geonosian had drawn in the dirt. Saw Gerrera wants to destroy the egg to prevent another generation of Geonosians from being born by a new queen, and Ezra learns that Saw’s sister was killed by a Separatist tank during the Clone Wars. Returning to the Ghost, Ezra compares Saw’s aggressive tactics to the Empire, which shames him out of killing Klik-Klak or destroying the egg, but the crew is forced to hide their ship in the tunnels when the Empire appears. Deeper underground, they find enormous poison gas bombs created by the Empire, which also bring to mind the dual-circle design. The Ghost blasts its way out past an Imperial cruiser but lose the evidence of the bombs in the process. 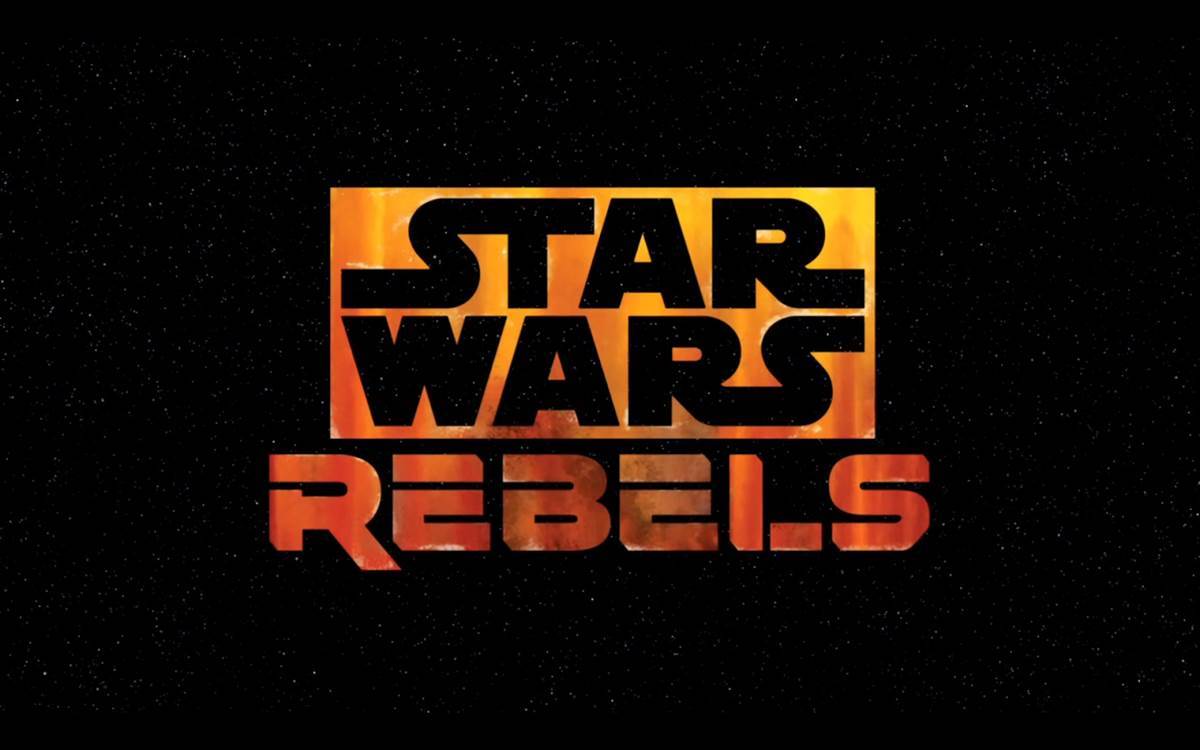 Star Wars Rebels is available to stream in its entirety on Disney+.