Way back in issues #3 through 5 of this current run of Marvel’s Star Wars: Darth Vader comic book, the Dark Lord of the Sith traveled back to the planet Naboo (where he once got married when he was formerly known as Jedi Knight Anakin Skywalker) and did battle with Padmé’s handmaidens, who– probably rightly so– blamed him for her untimely death.

Now the handmaidens have come to Vader, in search of their friend and fellow double Sabé, who’s been working alongside the Dark Lord for a number of issues’ worth of stories now. 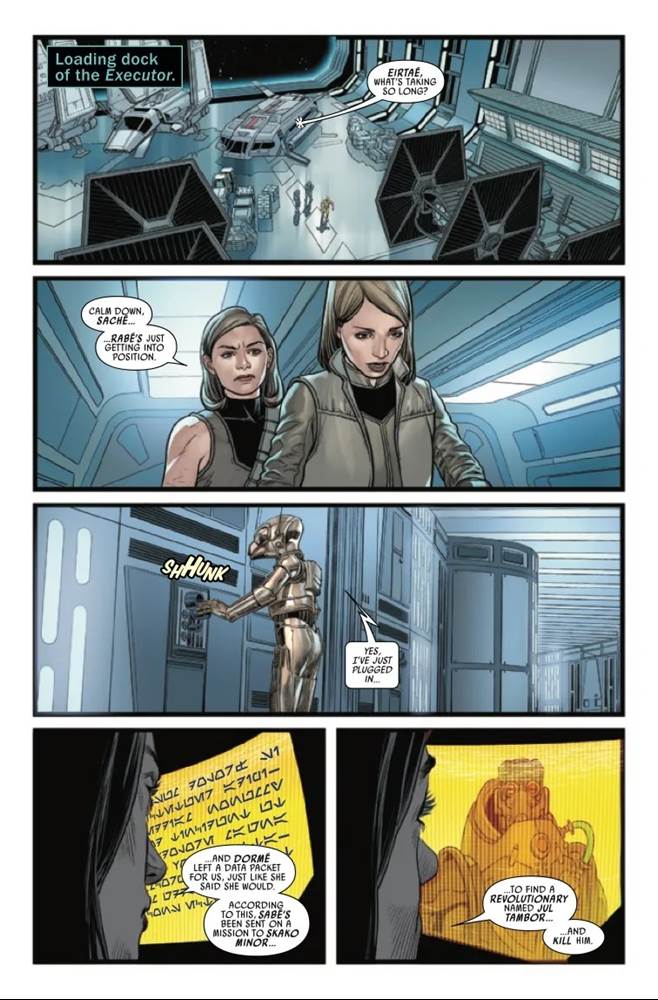 Darth Vader Vol. 3, #30 begins with the handmaidens aboard Darth Vader’s Super Star Destroyer Executor, with Dormé having been taken into custody after she was discovered impersonating Sabé by Vader himself. The other doubles of Padmé hack into the computer system and discover that Sabé has been assigned to assassinate Jul Tambor on Skako Minor, though they don’t necessarily believe that she would be capable of such an act. Vader tells Dormé that Sabé is working for him under her own free will, and he takes her aboard a Lambda-class Imperial shuttle in an effort to prove his point. Meanwhile on Brentaal IV, it turns out that Sabé has intentionally missed Tambor’s heart– which in Skakoans is apparently somewhere in the lower gut– and takes him aboard her ship in order to avoid Vader bringing his wrath down on Jul’s camp. But Tambor still has one final trick up his Techno Union sleeve: the ship is soon boarded by a battalion of Battle Droids, all of whom were once destroyed by Vader in combat at the tail end of the Clone Wars. 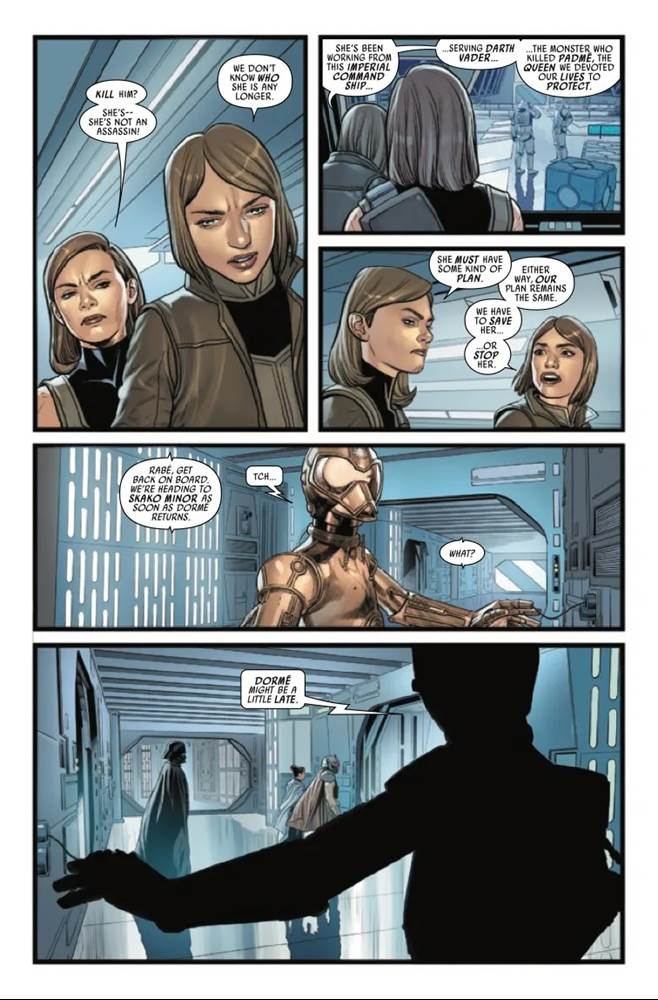 In a different part of the galaxy, Vader uses Dormé to draw the other handmaidens off his Star Destroyer and down to the surface of the planet Fedalle, where they pretty much immediately begin to fight each other. The rematch does last terribly long (just a couple pages), with Vader of course emerging from the skirmish victorious, but the handmaidens then reveal something he couldn’t have expected. They used data collected from his armor during their last encounter, coupled with a command code collected this time, to initiate a self-destruct mechanism aboard the Executor. In exchange for not blowing up Vader’s capital ship with the thousands of Imperial crewmembers on board, all they want in return is Sabé. But when Ochi of Bestoon receives a message from Jul Tambor threatening Sabé’s life, these diametrically opposed parties find a way to work together. That brings us to this month’s cliffhanger ending, which asks the question of how long Vader and the handmaidens can cooperate in the interest of Sabé’s safety and survival, but there are also hints in this issue that Sabé may be working an alternate angle to what’s on the surface. Overall I thought this was another fun outing from writer Greg Pak and artist Luke Ross, but as I’ve said recently I’m crossing my fingers that they’re building to a resolution to the handmaiden saga in this title sooner rather than later, considering it’s been dangling there for almost three years. Regardless, Star Wars: Darth Vader remains a reliably entertaining read populated by a collection of memorable characters and locations in A Galaxy Far, Far Away.