How I Met Your Father has exceeded themselves with an incredibly funny sophomore season that adds hilarity, joy, and depth to a diverse cast of characters. At the end of season one, Ian (Daniel Augustin) had just returned in time for Sophie’s (Hilary Duff) gallery show. Having just broken up with Drew (Josh Peck) and Jesse (Christopher Lowell), Sophie now has a chance to reunite with a lost love. She must first deal with the consequences of pushing Jesse away to his ex-girlfriend Meredith (Leighton Meester) and trying to learn why she torpedoed what could have been a great relationship.

As Sophie deals with internal questions of her heart, Sid (Suraj Sharma) and Hannah (Ashley Reyes) have eloped, and Charlie and Valentina (Tom Ainsley and Francia Raisa) are trying to move on from their breakup last season. Ellen (Tien Tran) is pursuing a relationship with her next door neighbor Rachel (Aby James) and the gang is growing and connecting as friends.

The premise of How I Met Your Father is that it is not a reboot, or spin off, but inspired by How I Met Your Mother, which makes success difficult. How does a series stand out from a popular network comedy that earned countless awards and lasted nine seasons? Despite longevity and critical success, How I Met Your Mother has also entered the zeitgeist with countless pop culture moments that continue to this day.

I did not envy the cast or creators when I first watched season one, but I was pleasantly surprised by the connections and spirit of the show and what it was trying to do. Season one was quick and thankfully How I Met Your Father has been renewed for a much longer season two, and the cast and writers are certainly ready to chart their own course. I am pleased and supremely happy to proclaim that How I Met Your Father is a knockout. The comparisons to How I Met Your Mother are over. The cast has found their groove, the stories are hilarious, and while the show runs through its second season with joy and mirth, it also doesn’t forget its roots, with some more winks and nods to its predecessor.

Hilary Duff is supremely talented, and a comedic gem in the role of Sophie. The audience knows Sophie, Duff knows Sophie, and threads the difficult needle of making Sophie likable, and down to earth perfectly. Between the incredibly funny cutaway moments in the episodes and exploring matters of life and love, our lead character is a truly human person. She’s quirky, funny, talented, and unsure about her future. Everyone can relate.

Duff deserves so much credit in making Sophie a multidimensional character, who has heart and wants to find true love, while at the same time being a great friend. Duff shines in the smallest moments and leads the big gags with such perfection, that it is hard not to lose your focus from laughing too much.

It is the second season of a show that really indicates to viewers how long the series might last. For a comedy of the magnitude like How I Met Your Father with an incredible lead like Duff, a pitch perfect supporting cast, and some incredibly off beat and funny cutaway moments, the viewers are in for a television treat. 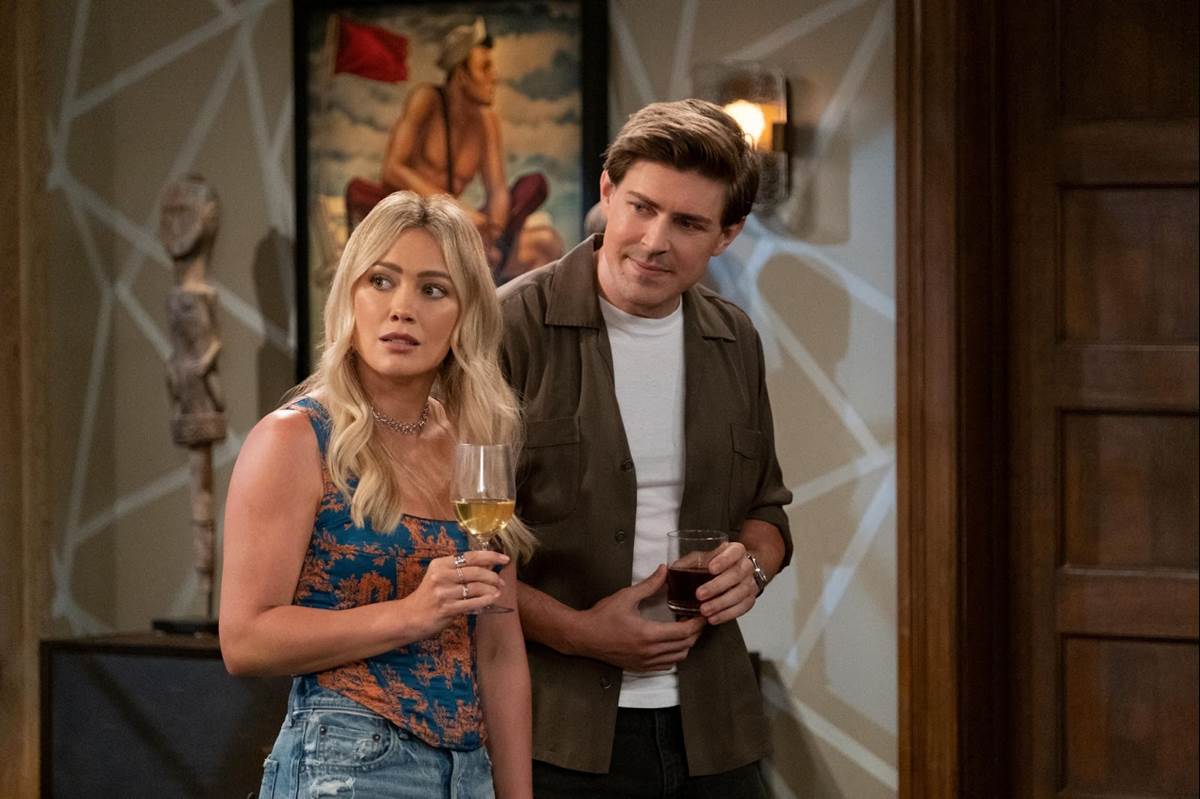 While Hilary Duff gets to add layers to her wonderful character, season two has also given us more time with Sid and Hannah. Suraj Sharma and Ashley Reyes have more character arc in the first two episodes then for most of season one. This is a great thing, as the two play a newly married couple just trying to make life work, with a heck of a commute to deal with. Sharma and Reyes are standouts, and viewers will be grateful to get more of their story.

Tom Ainsley increases his charm and magnifies his wit, but his Charlie gets to grow as well. How does Charlie deal with being single, on his own, in a new country. Ainsley is brilliant in all scenes, but as we see throughout season two, there are layers to Charlie that are yet to be found.

Christopher Lowell plays Jesse with a calm neurotic tendency that brings the character such a level of humanity that would often be played up for insanity in many other shows. Jesse is a great guy, who mirrors Sophie in many ways, and thanks to Lowell and Duff’s unbelievable magnetism on screen, viewers will root for these two to get together. They’re destined for one another.

Tien Tran is finally getting the time to explore Ellen and allow viewers to dive into her life as she makes her way in New York. Being roommates with Charlie is a perfect pairing between the two, and within the first couple of episodes, we see a lot of growth for Ellen, and Tien Tran brings her own unique spin to this dynamic group of friends.

Kim Cattrall adds the balanced amount of learned wisdom as the elder Sophie, and what viewers will get is a great television comedy that stands tall for it’s hilarious writing, stand out cast, and a gifted lead in Hilary Duff. How I Met Your Father is truly its own show now, but this is New York City, and as fans of How I Met Your Mother will attest, that gang is still very much around in the timeline and are bound to show up in one way or another.

Surprise guest stars or not, I am all in on How I Met Your Father because this show makes me laugh, is heartfelt, and genuine. Hulu should renew right now for two more seasons.