Welcome to the “Spitzerverse,” a term coined by actor Jon Barinholtz at a TCA press conference for Season 2 of the NBC sitcom American Auto. The Office, Superstore, and American Auto are all single-camera workplace comedies with Justin Spitzer’s creative stamp and the series creator shared how each show relates to one another. "The Office was about middle management in as generic an industry as you can come in,” Spitzer said. “It was literally about a square, flat, white piece of paper. It's totally generic. Superstore was about being working class and being constantly under the thumb of a corporate hierarchy. This is people at the very top. They can do what they want. They have resources. They don't have a CEO or corporate making them do anything, but that means they still need to figure out how to deal with a changing industry in a changing world.” 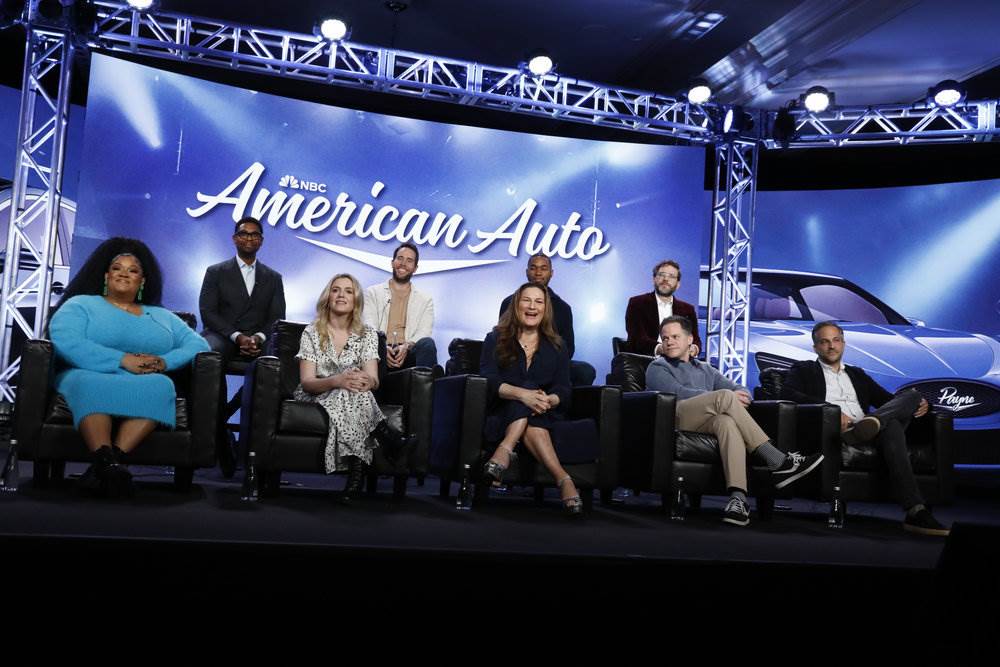 “We're more unified and less fractured as a community in this season,” revealed Ana Gasteyer, who plays Payne Automotives CEO, Katherine Hastings. As CEO, Katherine has to lead her team through challenges the likes of which Michael Scott and Glenn Sturgis never had to face. “Season 1 ended with these locking pawls, which are the things that keep your car from rolling backward and killing people.  And we obviously had a little issue with those, and were trying to decide most of last season if we should do the recall. So we start Season 2 with that conversation. And suffice it to say, it's not smooth sailing.”

“A really fun part about this show and just the ‘Spitzerverse’ is when you deal with these things like gender dynamics and social dynamics and things that we're all dealing with in the real world, but it doesn't feel like it's beat over our head as performers or as by viewers,” Jon Barinholtz said. With a female CEO of an automotive company, ala GM, the show is allowed to poignantly touch on gender parity in corporate America in a way that few shows can. “It's people existing in this world and dealing with what we're all dealing with on a day-to-day basis and just finding the comedy in that.”

“Whenever there's a misogynist moment or a thing about race, we don't need to have a [freaking] five-hour dissertation,” added X Mayo, who plays Dori, Katherine’s assistant. “We're making a comedy, right? We're not trying to solve a misogyny war. We're not trying to solve racism… We're making a comedy, so we touch on it, and it's how it would be in a workplace comedy. If I experience misogyny, I would see it, check it, and move it. I wouldn't, like, get on the [freaking] table and do ‘Still I Rise.’”

“One of the things I love the most about this show is that it doesn't talk down to the audience at all,” added Humphrey Ker, who plays Elliot, the Chief Counselor of Payne Motors. “There's often a real danger, particularly in the comedy sphere, that there's this feeling of you need to explain everything to an audience. Will they get this? Will they understand this? Will this resonate with them? I think if you make good TV, people enjoy it. I've done some writing and some pitching and some this, that, and the other, and have run into those instances where they're like, ‘Well, hang on. This is a niche thing.’ And you think, ‘Well, how many people have ruled over Westeros in America?’ No one has, but they love watching people do it because it's a fascinating and interesting thing. So if you can hit dynamics that are truthful to people, then that will always be interesting, which is great. Well done, us.”

“It does feel like with every table read that something magical is happening where the actors and the characters, the people and the characters, are finding a very sweet spot, the Venn diagram, sharing more,” Harriet Dyer said of how characters on American Auto have taken on some of the cast’s attributes, and vice versa. “They feel like we are finding more of a holistic meeting of Sadie and Harriet, or X and Dori, stuff like that. We're finding it is getting closer. And it's more fun to play.”

“First season, Cyrus was very much a know-it-all,” Michael Benjamin Washington shared of how his character has evolved. “I called him Wikipedia on wheels. He kind of knew a lot of information. And this season the writers' room has really found all things that are fallible about him, what make him borderline [jerk]-ish sometimes, which is so fun to play in comedy. And I wonder if they were studying me. The guy who sneaks out early, the one who's going to the theater a lot. There's just a lot of attributes about my love of the arts that start to fall into Cyrus that I really, really enjoy, but also that, which is a recurring theme in especially the second season, that the ship is sinking, and how do we save each other and our company? Cyrus is very much interested in finding that lifeboat so that he does not sink himself. And I wonder, where did you get that from? What's going on?”

“I think my character kind of comes into his own,” Tye White revealed about his character Jack Fortin, who is newer to the corporate world than his peers. “He didn't belong there in the first place, and I think in the second season you kind of learn that he's finding his way. He still might not really belong, but he's just working his way to a place where other people are accepting him, and he's learning about the C-suite. He has a really, really cool arc.”

“The stock price goes down, and they're trying to dig themselves out of an economic hole, which luckily then happened with our whole economy,” executive producer Eric Ledgin explained about where we find the American Auto team at the beginning of Season 2. You didn’t need to know about the paper industry to understand The Office and needed no retail experience to resonate with Superstore. The same is true about the auto industry and this series, although you likely know at least a little. “There's so much happening in the auto industry that there is a lot to pull from that. It's news that, even if you weren't looking for it, you can't really avoid it. And I think Justin has always been good, since I started working for him on Superstore, of really digging into real things that happen, in this case not just in the auto industry, but in big corporations and researching scandals, researching things that seem like there's a funny take on it. Pretty much every episode is based in something that has happened somewhere that we've read about.”

Stay current on corporate events with Season 2 of American Auto, premiering Tuesday, January 24th, at 8:30/7:30c on NBC following a new episode of Night Court. Episodes of both shows are available to stream on Peacock the next day.