HIMYF is back for their sophomore season. The only question is, who is the father of Sophie’s son? Will we learn the answer this year? 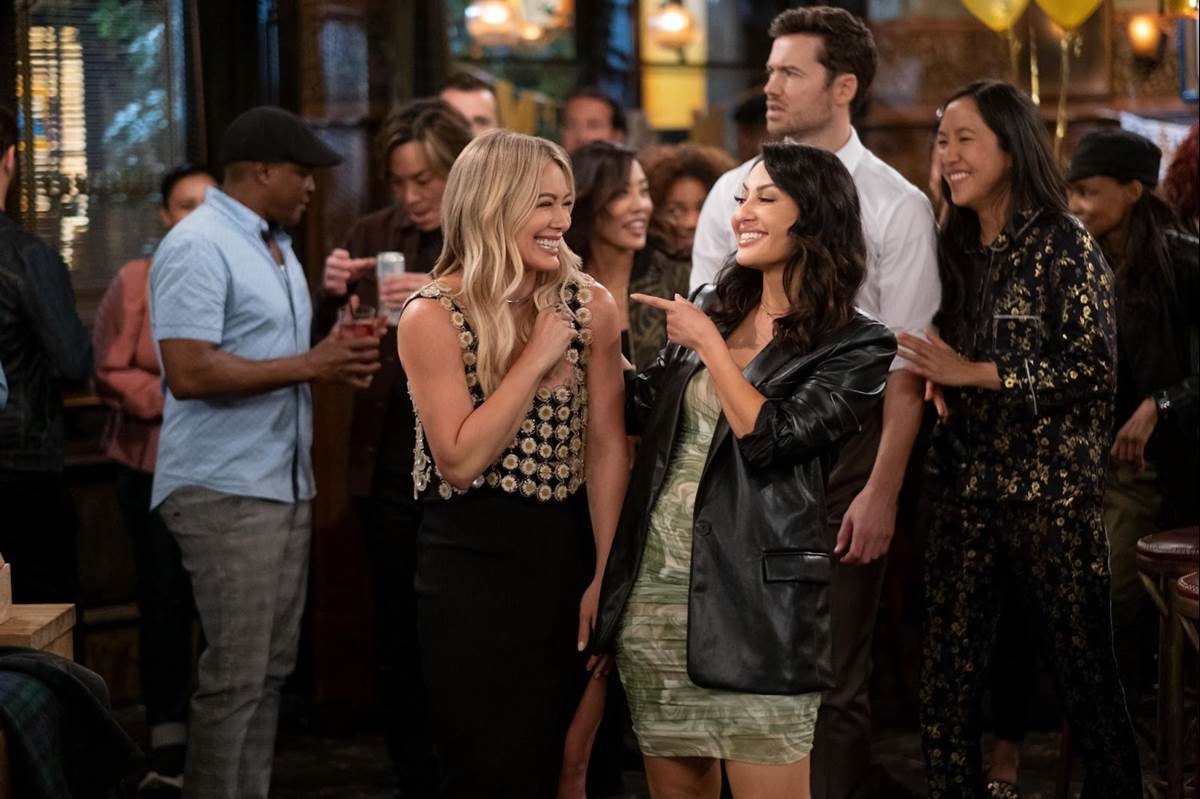 It’s 2050, and Sophie (Kim Cattrall) is continuing her tale about how she met the father of her son. (There was a nice joke about Sophie being gone. It felt like a year for her son.)

Back to the night of her first gallery show, Sophie (Hilary Duff) and Ian (Daniel Augustin) are talking about how shocking it is to see him. Ian hopes his showing up is okay. Sophie in 2050 describes how torn she felt, after all she just broke up with Drew (Josh Peck) and Jesse (Christopher Lowell).

Hoping for love, and wanting to put her hurt aside, Sophie tells Ian there is nothing going on romantically with her. Valentina (Francia Raisa) overhears Sophie talking out how nothing is up, and tries to intervene. Sophie admits it’s a little sudden, but she is not going to let Ian out of her life again.

Sid and Hannah (Suraj Sharma and Ashley Reyes) spend their time at the gallery describing how unmagical their elopement is to Valentina. Sid and Hannah both agree that they need something more to commemorate their marriage and plan to host a night to remember party at the bar. Sid asks Charlie (Tom Ainsley) and Valentina to do a couples roast because that would be funny but asks that they not mention his Anna Kendrick cups phase. (This is the cutaway humor that all shows need. This makes me laugh just writing this sentence and when you see this scene you will burst out in giggles. Everyone knew someone who went through this phase. You know who you are.) Valentina informs them that she and Charlie broke up.

The group of friends doubt that Valentina and Charlie can be friends based on their passionate romance. Jesse interrupts the group which causes some worry for Sophie. Can they coexist with the tension of their breakup? Sid tells them that he doesn’t care what is happening with anyone else, that they are going to celebrate their wedding, and be happy about it.

Everyone is assigned a job for the party, and when Sid tells Ellen (Tien Tran) that the playlist must include The Electric Slide, Jesse reminds him about the disastrous attempt to start a spontaneous electric slide on the quad at college. Someone comes along and stomps on Sid’s radio which brings applause from the quad. (Oh my god, this show is hitting grand slams on their first episode of the season. More cutaway humor like this please.) 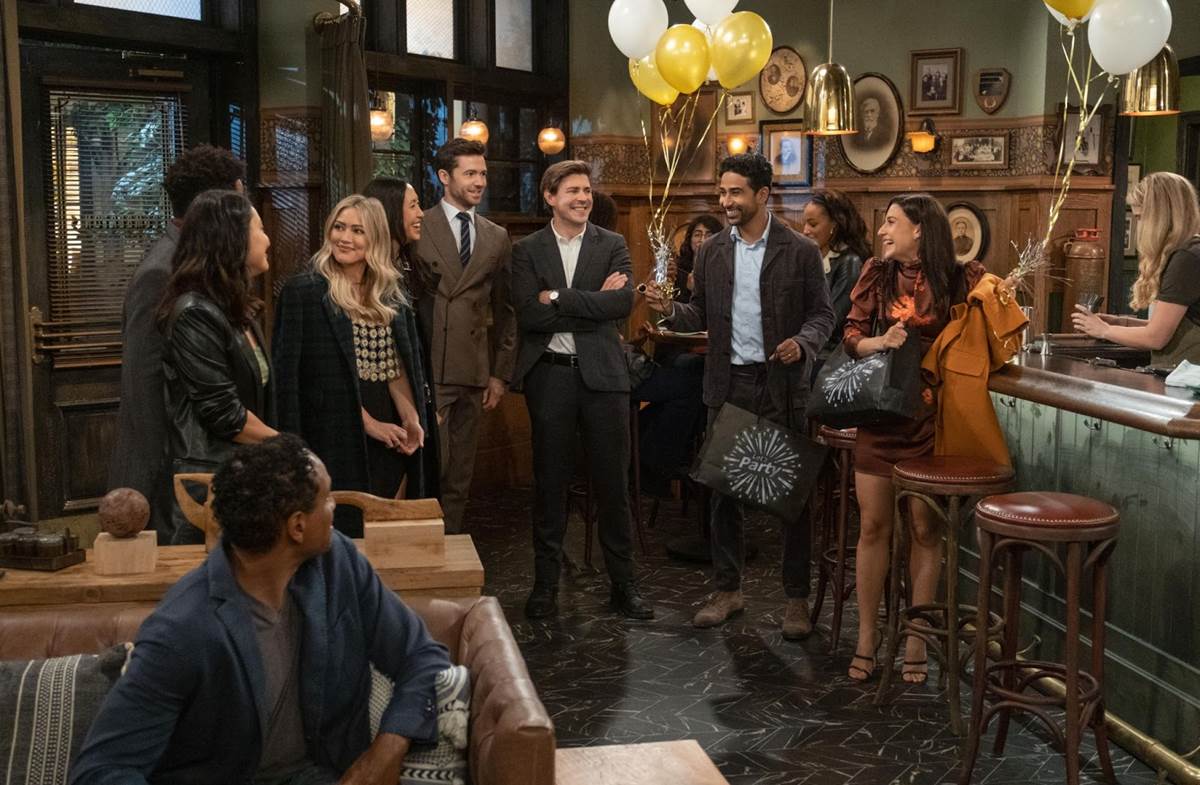 Sophie tells her friends that she doesn’t want Ian to know that she broke up with two different guys in the last couple of days. Jesse is keeping his distance, but hurt to see Sophie has moved on. Ellen tries to find out what’s happening with her brother, but Jesse tells her that she has to keep his secret. He then describes to his sister how he accidently told Sophie he loved her in his sleep, then they broke up and she told Jesse to go on tour with Meredith (Leighton Meester), and Jesse agreed to it. Ellen doesn’t care about his stupid love life, she’s more hurt that her brother is going to leave her to go on tour. Ellen tells him that she moved across the country to reconnect with him, and now he is going to proverbially abandon her. (Tran has a great moment with a sequin gag picture of herself that she uses perfectly to bring the laughs.)

Sid gets a delivered wedding cake, which turns out to be a bust. Charlie and Valentina are working on a video collage to celebrate Hannah and Sid, which seems to be going well. Charlie talks about how he likes being her friend, and how easy it is to be friends. Their attempt to be friends does not go well, but leads them back down the physical side of their relationship.

Ian is a little concerned by the fact that Jesse is constantly staring at them, and rather than telling the truth, Sophie tells Ian that since Jesse appeared in her gallery photo he’s obsessed with being a model. While trying to photograph the party, Sophie tells Jesse to stop staring at her and her date.

Jesse is surprised at Sophie’s reaction, and how she is back with Ian so quickly, to which Sophie responds that she thought Jesse would be well acquainted with romantic interests coming out of the past to start the relationship up again. (Ouch, that has to burn, and Sophie did that well.)

Telling Jesse that she’s not going to let him ruin her night, Sophie turns around to see Drew, who is drunk. They talk, and Sophie learns through Drew’s drunken ramblings, that he is heartbroken, and did some ridiculous things to compensate for losing Sophie. (Josh Peck is hilarious in the scene. A spray tan, and teeth whitening, as well as the description of his day is laugh out loud funny.) Drew meets Ian, and tells him that Sophie is his ex.

Jesse thinks Ellen told Sophie his secret, but Ellen tells him that she didn’t. Ian asks Sophie how recently she broke up with Drew, because it feels fresh, and at this moment, both Drew and Jesse are walking towards her which forces Sophie to do the only thing she can think of to avoid telling the truth. She calls for Sid and Hannah’s first dance.

The music won’t work, but Sophie is willing to sing the song herself just to avoid confrontation. (Hilary Duff is hilarious as she butchers this song.)

Sophie finally admits to Jesse that she saw him kissing Meredith outside of his apartment. Leaving the bar, Sophie is followed by Ian where they talk. He tells her that it seems like things have been messy for her, and that he doesn’t care about her past and still wants to give their relationship a shot.

As Jesse talks to Sid about how maybe Sophie wasn’t into him, Sophie tells Ian that she needs to figure out why she blew up her relationship with Jesse, or else she is going to keep ruining relationships.

Valentina and Charlie bring out their photo montage to celebrate Sid and Hannah, but they accidently edit in a video of them making out, which ruins the moment for Sid and Hannah. Seeing how much Sid wanted to throw the perfect party for Hannah, Sophie is touched by this love and forces everyone in the bar to stand up and do the Electric Slide for Sid and Hannah’s sake.

Sophie tells Valentina that she ruined three relationships within the last forty-eight hours and is now doing the electric slide, she clearly has hit rock bottom. To which we journey to 2050 with older Sophie who says that rock bottom would come later that year.

Back to the near future we see Sophie driving her car leaving a message on her mom’s phone asking for help, because she thinks she’s dating her dad, and then gets into a car accident. Getting out of the car, she meets the other driver, who is none other than Barney Stinson (Neil Patrick Harris). 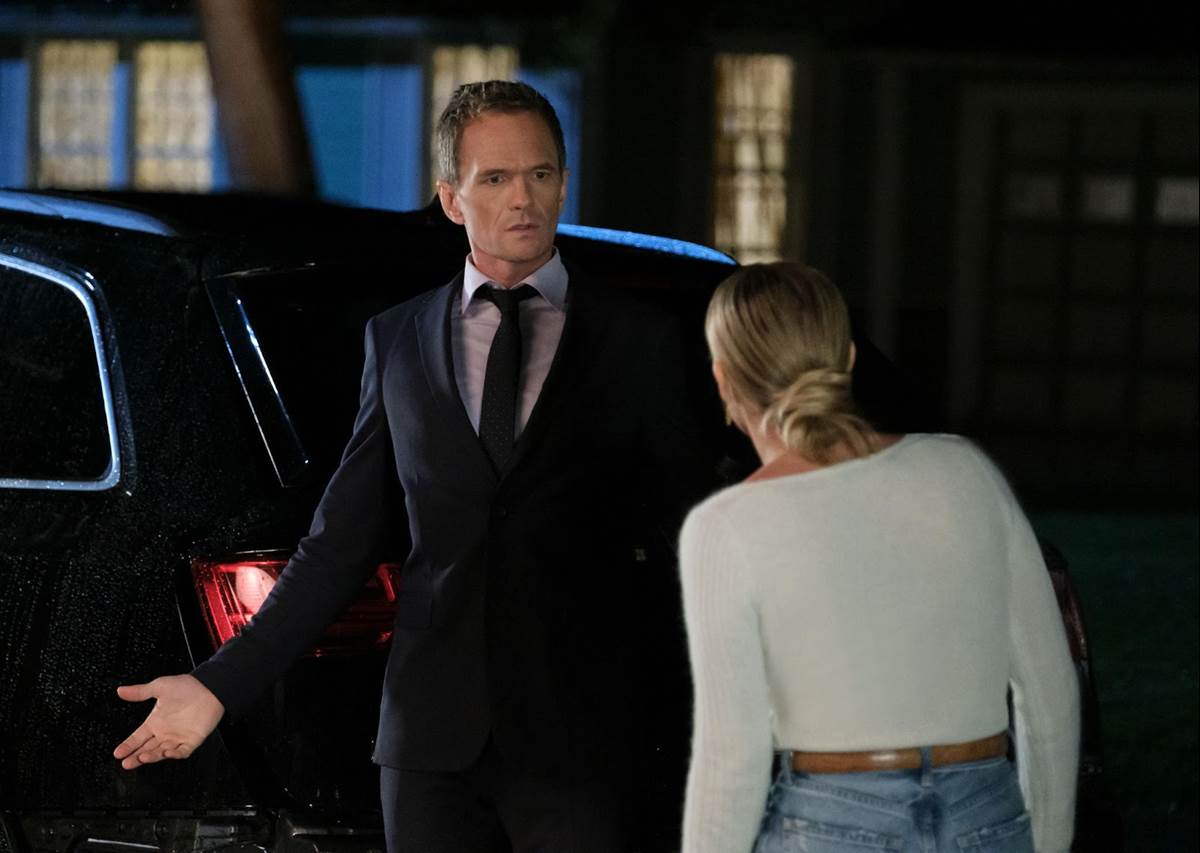 How I Met Your Father has blown away my expectations with the humor and character development we get in the first episode.

Sophie confronts all of her baggage immediately, neutralizes any possible harm, and has some self-realization about herself that is quite profound. Hilary Duff is laugh out loud funny, the rest of the cast gets ample time to shine, and in some cases more narrative development then the whole first season (Sid and Hannah), and the jokes continues to roll in.

Having the episode end with how Sophie meets Barney Stinson is the perfect hook to the season. I love how the series strikes out on their own, but still shows its roots that come from How I Met Your Mother.

How I Met Your Father fans have lots to celebrate as this season starts off with a perfect premiere.