“As opposed to Glass Onion and Knives Out, these are not whodunits; these are ‘howcatchems,’” Rian Johnson said of Poker Face, a series he created that debuts on January 26th on Peacock. Rian appeared at the TCA Winter Press Tour for an inside look at his first foray into creating stories for television. “I'd been lucky enough to work as a director on a few great shows: my friend Ted Griffin's show Terriers and also Breaking Bad. So I had kind of gotten to see the process through the eyes of an episodic director and see an incredibly well-honed machine working. But it's a very different thing when you're stepping into it to create it. And I really dove into it like it was one of my movies. I really jumped completely into the deep end of the pool… Because it's a completely different process, we had two terrific showrunners. I hired Nora and Lilla Zuckerman, who taught me the ropes in terms of a writers' room and how to write with a group of people, which I had never done before.” 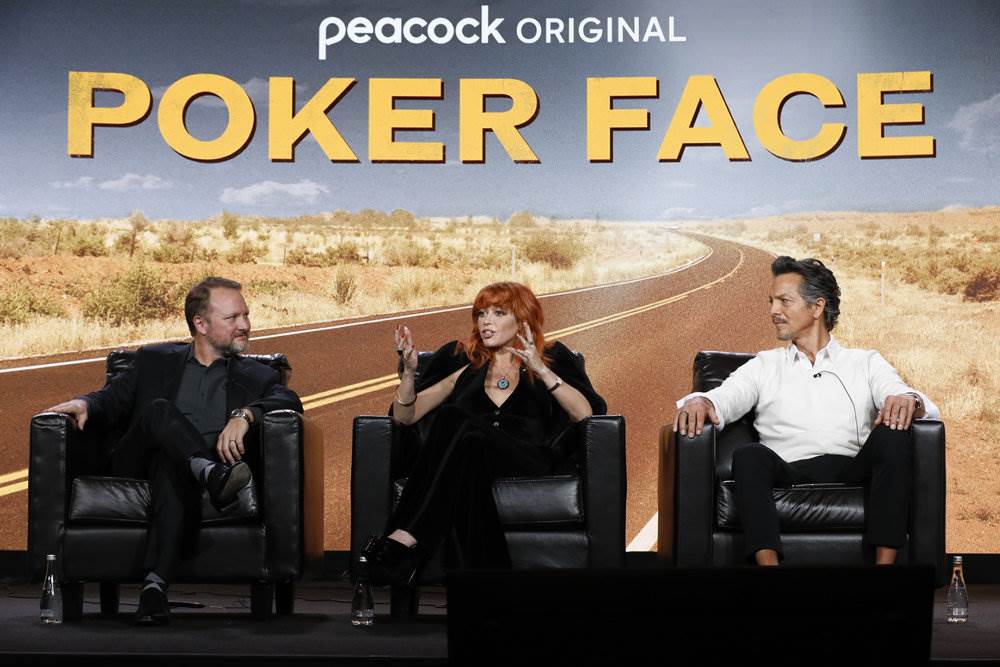 “This is us making a life plan together for how to hang out as much as possible,” joked series star and executive producer Natasha Lyonne, who helped Rian Johnson conceive the series. “When Rian handed me the script, it was shocking to just see what it is that makes a mystery because it's just right there in black and white. So it's all conceptual and a fun idea until you really see it. And it's such a gift, the way it fits like such a glove and yet is unlike anything I've had a chance to do yet.” Natasha plays Charlie Cale, a detective on the road who has the uncanny ability to tell when someone is lying. “What's so fun about the way Rian has crafted it is it's sort of just enough that it kind of gets her in through the door, but it's not a superpower. She has to go about solving that suspicion and following that thread all the way through in a very human, practical way that's much more just a puzzle than it is a power… The thing I love so much about playing her is she sort of really cares about the truth ultimately, which is something I identify with a great deal, and sort of looking out for the little guy. And when she sees something corrupt, it's like a nose for integrity and righting a wrong.”

During the press conference, a new trailer was released that showcased the wealth of talent joining the series as guest stars. “Actors love working with Rian because the architecture of what he writes is flawless, but he also is very specific about giving each character their own voice and, more importantly almost, in my frame of mind, their moment within the story,” shared Benjamin Bratt, who had the honor of guest starring in two episodes of Poker Face. According to Rian, it’s one of the benefits of the “howcatchem” format because you can give actors a much more attractive part to play within that hour of television. “It's no surprise that actors at the caliber that he put together with Natasha enthusiastically showed up to play.”

“It's like making ten little movies,” Rian Johnson said of the ten-episode order, each of which takes Charlie Cale to a different location for another case. “The show takes place on the road. We were based in Upstate New York, and we were able to find a lot of environments to fake a cross-country trek in that area. For one of the episodes I directed, Episode 2, we did go to New Mexico to shoot it because we needed a vast desert landscape. And it was also fun because it was the first time I had worked in Albuquerque since I directed ‘Ozymandias’ for Vince [Gilligan] with Breaking Bad, so e-mailing Vince and saying, ‘Guess where I am,’ it was kind of fun.”

“We wrote an episode that I got to direct that is this Nick Nolte episode,” Natasha Lyonne said of stepping behind the camera and teaming up with one of her Russian Doll writers, Alice Ju. “Cherry Jones is also in it, and Luis Guzman. So that one really stands out because of the way in which I got to work with them was so specific and really, really fun. I mean, this is a fun show to direct as well, because it is so specific. And each one is its own thing. And just to say that because of how these types of things are, it was also really fun getting to do that with Lilla, with Rian. There's a whole team that's supporting bringing this isolated one hour to life in the most precision-based way. We have such a great team, our production designer, and everybody.”

One thing that’s not so great, however, is the show’s star car, a Plymouth Barracuda. “It looks great; t's not super efficient to drive,” Natasha joked. “I'll be honest. The problem with the car is the brakes. The brakes are not what I'd call reliable, which is really a major, major asset on a car. You don't know that until you're in a car that has delayed reaction brakes. You don't realize how much the brakes come up in driving. But the Barracuda is gorgeous.”

Cantankerous vehicular costars aside, Rian Johnson and Natasha Lyonne loved making Poker Face, a project they both hope to revisit again. “It definitely wasn't conceived as a limited series,” Rian Johnson explained, inspired by shows like Colombo, Magnum P.I., and The Rockford Files. “There are infinite stories to tell… In the writers’ room, we would have pitch-out days where we would say, ‘What about an episode set in this kind of place? What about an episode set in this kind of place?’ In that way, it’s not about stretching some longer-term story of Charlie out for however many seasons. It's literally a smorgasbord of possibilities of different worlds we can dip into in each episode and whole new mysteries in every single one. So, for me, there's endless possibility.”

Peacock will premiere Poker Face with four episodes on Thursday, January 26th. The remaining six episodes will be released on subsequent Thursdays.