The Backbone of ESPN WWOS: Cheerleading?! 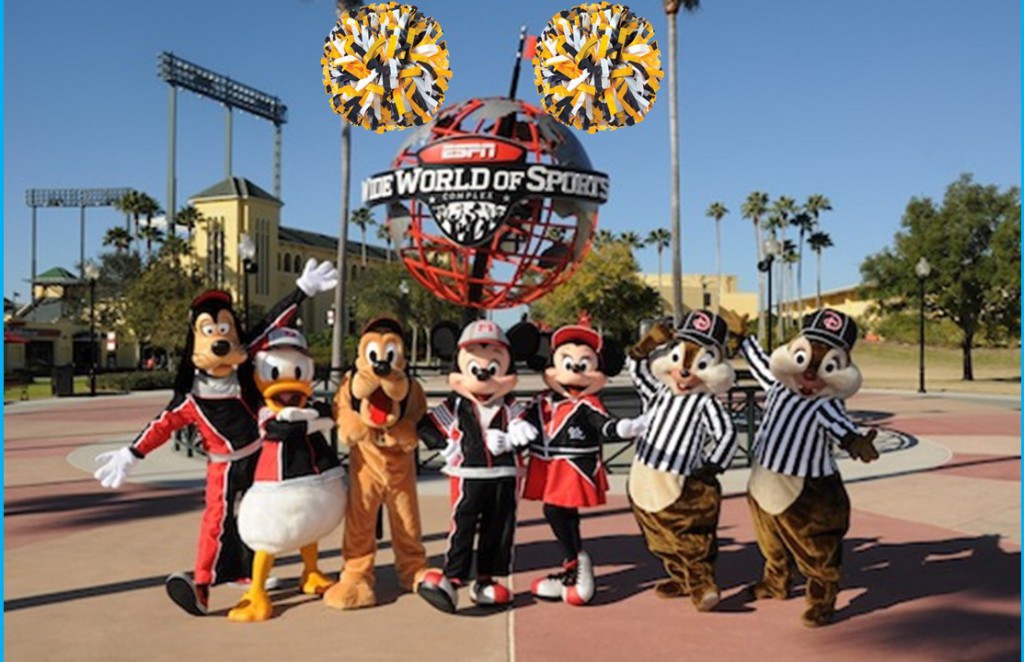 Football season is over, basketball season is slowly gearing up for March Madness and Spring Training for baseball is right around the corner. However, did you know you are in the midst of Cmy favorite season of the year?! It’s competitive cheerleading season! CUE CONFETTI!

I always think it’s interesting to learn about things that happen, or have happened, at the parks that are overlooked and forgotten by regular fans (RIP Epcot Kite Festival), so let me give you a quick lesson about the wonderful world of cheerleading.

Let me back up…most of you probably just know of competitive cheerleading as those bow-wearing people who take over the parks in January and April. You would NOT be wrong, as the biggest competitions in the nation and world for cheerleading are all held at the ESPN Wide World Of Sports every year. The sport itself is relatively new, with the All-Star Cheerleading (Cheerleading done outside of school at a local gym geared specifically for cheerleading, or one that doubles with gynmastics) governing body only formed in 2003 (The USASF) and high school competitive cheerleading becoming widely offered sport only in the past 10-15 years.

The sport became more known starting in 1997, when ESPN started airing competitions (the channel still airs them to this day, and their cheer programming is increasing every year, with both All-Star and High School Cheerleading content) and in 2000, with the release of the cult classic Bring It On.

Now, it has become a half a billion dollar industry that embraces Orlando as their unofficial competition home. You have UCA Nationals for both College and High School divisions (the latter being the featured Live Snapchat story on February 8th, straight from Orlando!), the International All-Star Championship and The Summit for All-Star Cheer, among numerous others. However, the piece de resistance is Worlds. Each April, every cheerleader and cheer fan takes over not only the Wide World of Sports complex, but, for some reason, the All-Star Sports resort as well. If you stay there not knowing, get ready to see lots of stunting practice , lots of screaming, and lots of glitter.

A spot in Worlds is the highest and hardest honor to obtain in All-Star Cheerleading, with teams needing to receive a bid win at another competition somewhere during the season, allowing them to compete. Thus, going to Orlando is many people’s Super Bowl, World Series, or Olympics. You’ll hear “HIT” being yelled many a time as you sit inside the HP Field House or, more recently, the baseball stadium (The crowds became so big, they needed more seats. The stadium sold out an hour before finals began this past year at Worlds. Read it and weep, Atlanta Braves!), which is the “Break a Leg!” equivalent for cheer. Instead of explaining what they do on the mat, here’s a video of the top finisher from the Large Senior 5 division (the “quintessential” division of Worlds, if you will) this past year.

If you don’t think that’s a sport, then you are lying to yourself. The teams are just as popular as a major sports team, with some of the cheerleaders becoming cheer-lebrities (recently showcased on ABC News). It’s a sport and industry most people don’t realize is as big as it is. As a die-hard cheerleading fan, my plan is to be there this coming April to report on the event for the site.

Frankly, I’m surprised that Disney hasn’t done more to embrace their finger on the pulse of cheerleading. No Disney Channel or ABC Family shows feature cheerleading prominently, no low budget films…nada. It’s a huge market, and although you have the sport itself, why not expand it into other divisions of the company? It’s a gold mine waiting to happen.

The ESPN Wide World of Sports Complex may not have a football stadium, the ability to hold the Olympics, or that 100-lane bowling alley they promised us years ago, but they do have the entire cheerleading industry in the palm of its hand.