Cinderella Soundtrack to be Released by Walt Disney Records 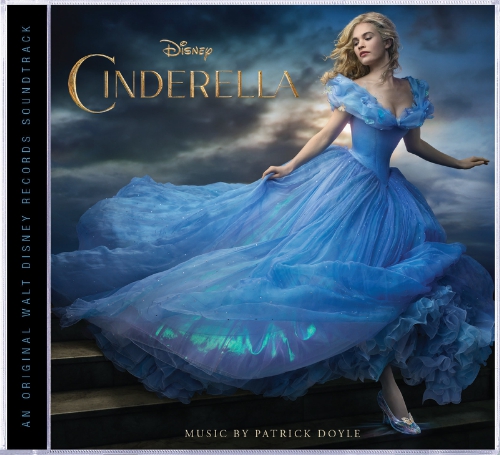 Walt Disney Records will release the original motion picture soundtrack for Cinderella on March 10, 2015. The album features original music by Patrick Doyle (“Brave,” “Thor”) marking the eleventh time Doyle has teamed with director Kenneth Branagh. The score was recorded at Air Lyndhurst Studio in London, and was performed by the London Symphony Orchestra conducted by James Shearman and produced by Maggie Rodford. The film arrives in theaters on March 13, 2015.

Patrick Doyle’s long-time creative collaboration with Branagh began in 1989 with “Henry V.”  The film’s song ‘Non Nobis Domine’ was awarded the 1989 Ivor Novello Award for Best Film Theme. In 1991, they re-teamed for “Dead Again,” which earned Doyle a Golden Globe®-nomination. Subsequent collaborations include “Frankenstein,” “Much Ado About Nothing,” “Love’s Labour’s Lost,” “As You Like It,” “Hamlet” (for which Doyle received an Oscar® nomination for Best Original Score), “Sleuth,” and “Jack Ryan: Shadow Recruit.”

Doyle has scored over 50 international feature films, including “Rise of the Planet of the Apes,” “Harry Potter and the Goblet of Fire,” “Gosford Park,” “Sense and Sensibility,” “Indochine,” “Carlito’s Way” and “A Little Princess.” His work has led to collaborations with some of the most acclaimed directors in the world, including Regis Wargnier, Brian De Palma, Alfonso Cuarón, Ang Lee, Chen Kaige, Mike Newell and Robert Altman.

The story of “Cinderella” follows the fortunes of young Ella (Lily James) whose merchant father remarries following the death of her mother. Eager to support her loving father, Ella welcomes her new Stepmother (Cate Blanchett) and her daughters Anastasia (Holliday Grainger) and Drisella (Sophie McShera) into the family home. But, when Ella’s father unexpectedly passes away, she finds herself at the mercy of a jealous and cruel new family.

Soon, she is forced to become their servant, disrespected, covered in ashes and spitefully renamed Cinderella. Yet, despite the cruelty inflicted upon her, Ella will not give in to despair nor despise those who mistreat her, and she continues to remain positive, determined to honor her mother’s dying words and to “have courage and be kind.”

When Ella meets a dashing stranger in the woods, unaware that he is really the Prince (Richard Madden) and not merely Kit, an apprentice at the palace, she believes she has finally found a kindred soul. It appears her fortunes may be about to change when the King (Derek Jacobi) summons all maidens in the kingdom to attend a royal ball at the palace, raising Ella’s hopes of once again encountering the charming Kit. Alas, her Stepmother forbids her to attend and callously destroys her dress.

Meanwhile, the calculating Grand Duke (Stellan Skarsgård) devises a plan to thwart the Prince’s hopes of reuniting with Ella and enlists the support of the devious Stepmother. But, as in all good fairy tales, help is at hand. Soon, a kindly beggar woman (Helena Bonham Carter) steps forward and, armed with a pumpkin, a few mice and a magic wand, changes Cinderella’s life forever.

The Cinderella original motion picture soundtrack will be available wherever music is sold on March 10, 2015. The album is now available for pre-order at iTunes http://smarturl.it/cnsa1 and Amazon. The physical CD will include an insert to download a new original song performed by Idina Menzel, Kristen Bell and Cast from the short “Frozen Fever.”  The animated short will be shown in front of “Cinderella” and includes the new song written by Oscar and Grammy-winning composers Kristen Anderson-Lopez and Robert Lopez.