The “Nikki Heat” series books have been a delightful accompaniment to the ABC TV series Castle. On Castle, ABC viewers followed the adventures of author Richard Castle (as played by Nathan Fillion) and NYPD detective Kate Beckett (as played by Stana Katic).

Although the series ended last year after eight seasons, the detective novels “written” by its main character, Richard Castle, continue to hit shelves. The latest thriller High Heat begins with Nikki Heat (the novel’s character inspired by Beckett) and her team receiving a video of a journalist’s beheading. Even though the concern of a terrorist group gaining ground in her territory is enough for immediate action, it is the video’s conclusion that sets up the stakes in this case. The terrorists declare that their next victim will be her husband, the famous writer Jameson Rook (the novel character based on the author Castle). 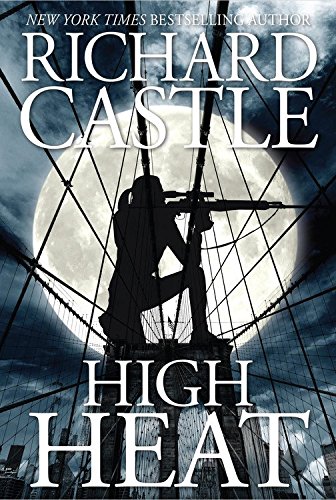 I enjoyed the opportunity to once again be in the world of Castle & Beckett even though it’s one step removed in the characters of Heat & Rook. Eavesdropping on the 20th precinct and delighting in the camaraderie of Esposito, Ryan and Laney as realized in the novel’s characters Ochoa, Raley and Parry was also a plus.

As I read the novel, I enjoy considering the character Heat’s deep love and desire of Rook with the knowledge that its Castle’s imagining (wishful thinking?) of what Beckett is thinking. So while it offers a bit more of a look at Beckett, it is really a deeper look into Castle’s psyche. Taking that a step further as a fan of the show, it’s fun to imagine Kate reading these books and offering Richard her thoughts on his portrayal of her.

A secondary plot presented in book’s opening pages is the appearance of a woman who Nikki is convinced is her mother, even though her mom has been dead for nearly 20 years. In the series Castle Beckett’s main drive — the moment in time that most defines who she is — was the untimely, violent, unsolved death of her mother. Solving that murder in the series leads Beckett & Castle into very dangerous circumstances but brings them very close. As a fan of the show, it was uncomfortable to consider Castle would explore this hypothetical in his detective novels and it’s a storyline that makes very little forward momentum in this title, clearly setting up books to follow.

Overall though, High Heat was an enjoyable, quick read. It wasn’t a page-turner in the traditional sense where I was on the edge of my seat with anxiety or curiosity as to culprit’s identity, but rather I was simply eager to spend more time in the world with characters I enjoyed and see how the author wove the pieces together.

Sadly though the novel’s plot fell into the same storytelling patterns that tempered my joy in the series’ final seasons. The story rather than deepen the connection, the bond of the lead duo, found ways to keep Heat & Rook apart and as the book’s story lines developed it appeared that they were leading them further apart for future installments in a similar way that the TV series had. So much as it was for me while watching Castle, the fun was in the journey much more than the destination.