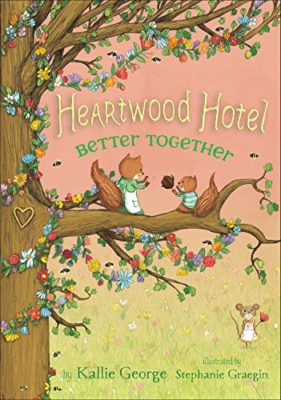 Spring has sprung at the Heartwood Hotel and proprietor Mr. Heartwood is off on a well deserved vacation. The hotel is left in the care of Giles, a lizard who overreacts to news of a new rival hotel and tries to boost occupancy with the “Spring Splash” celebration, which features friendly competitions amongst its guests. The promotion works a little too well, with occupancy filling up quickly and egos clashing amongst some of the contestants.

Mona continues her quest to learn more about her parents, who we previously discovered were employed at the Heartwood Hotel in its early years. When she finds all of the old guest books, she is excited that her best friend, Tilly the squirrel, is willing to help her read through them. Not only does the Spring Splash keep Mona too busy for reading, but Tilly’s reunited brother Henry is now a resident of the hotel and he takes up what little time she would have had to help Mona.

Henry is starting to get on Mona’s nerves, making her feel some unwanted “grumps.” The Heartwood Hotel series approaches emotions in a charming way, with previous books describing sad experiences as “hurts.” Aimed at readers in 2nd-5th grade, the series provides a great role model for dealing with strong feelings in thoughtful and rational ways. Despite being stories about animals, the series helps kids deal with their uniquely human feelings.

Stephanie Graegin also returns to illustrate this third book, providing pencil drawings to help underscore key moments in the story and inspiring kids’ imaginations with this cuddly world. Her work has a quality that reminds me of E. H. Shepard’s drawings for A.A. Milne’s Winnie the Pooh series. While the book is at a reading level perfect for elementary school kids, the illustrations also make it easily accessible for parents to read to younger kids. The chapters are short, allowing kids to digest them at a pace they’re comfortable with.

I was already a fan of the Heartwood Hotel series and really enjoyed revisiting this world a third time in Heartwood Hotel: Better Together. The final page advertises a fourth installment is on the way, a summer story expected in July called Heartwood Hotel: Home Again. Disney Hyperion has taken great care to make sure that the artwork on the dust jacket and hardcover match the themes established in the first two books, which also makes them a visually striking addition to your child’s bookshelf.