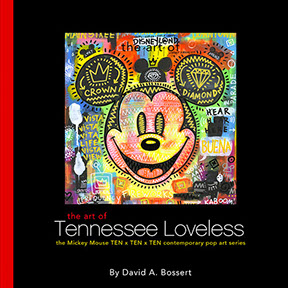 Pablo Picasso once said, “Every child is an artist. The problem is how to remain an artist once we grow up.” Disney animation fans are no doubt familiar with the animation talent that flourished at Walt Disney Studios and the animation art form has certainly influenced many modern artist. In a new book from Disney Editions by David A. Bossert, Disney fans can meet one of the lucky individuals who retained their youthful ability to create and draws inspiration from Disney artists through The Art of Tennessee Loveless: The Mickey Mouse TEN x TEN x TEN Contemporary Pop Art Series.

Loveless’ TEN x TEN x TEN series came about almost by accident. Disney Fine Art by Collector’s Editions had several artists working on a project of painting Mickey head silhouettes and Tennessee Loveless’ contributions were so well received that they asked him to do ten of them, called “Ten by Tennessee.” Each time he would submit more pieces, more were requested and ultimately his series, which are all on 10″ by 10″ canvas, became titled “TEN x TEN x TEN” with one hundred pieces in the collection. 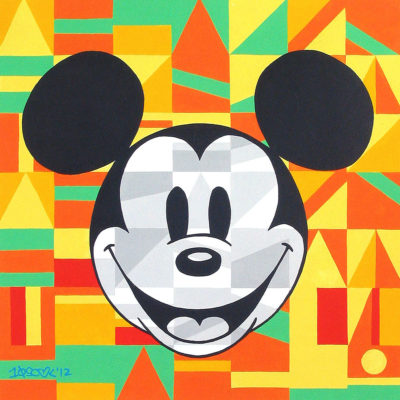 This coffee table book collects all one hundred pieces from the series, as well as a few that were rejected by Collector’s Editions, and examples of Tennessee Loveless’ other works, including paintings of pop culture icons like Marilyn Monroe, Judy Garland, and David Bowie. Each painting features the same image of Mickey Mouse at the center, but the work eclectically changes and is arranged into ten chapters by theme, each one containing ten images. This mathematical breakdown is part of Loveless’ brilliance, which is sometimes even applied to the pieces directly. For example, one piece called “Steamboat Willie Unlocked” divides the pitch and frequency of “Turkey in the Straw” by time into geometric patterns with specific colors applied to each instrument behind a black and white Mickey face. The artist’s intent was for people to visually feel the music. 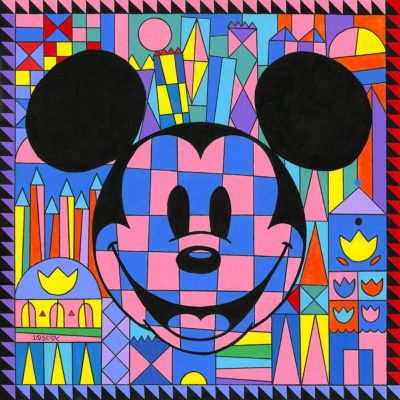 Written by David A. Bossert, who recently brought us books on Oswald the Lucky Rabbit and Destino, this book begins with a chapter all about the life of Tennessee Loveless and how this color blind boy from a small town in Georgia became an artist with a distinct style and vision. This section talks about how a temp job with Disney actually taught him how to work with colors his eyes can’t detect. Readers will find inspiration in Loveless’ story and this book highlights his artistic genius, as well as the artists that inspired him. One of the sections called “Contemporary Modern” features Mickey Mouse artwork inspired by the artists that inspired Loveless, including an “it’s a small world” piece in the style of Mary Blaire.

Other sections are inspired by cities around the world, sensory experiences, pieces that speak to the human condition, the 1980’s, and geometric shapes. However, a section called “Loveless Letters” features Tennessee’s most personal pieces of the collection, all of which appear after Bossert’s chapter about his life, and also examines the themes of his work. In this section, Mickey’s face is full of text, often describing where Loveless was and what was on his mind at the time he created it. More than just a visual artist, Loveless is a deep and profound writer and the words within these pieces blew me away just as much as the visuals did. Through these groundbreaking pieces, I feel more connected to Loveless than perhaps any other artist I’ve ever read about. 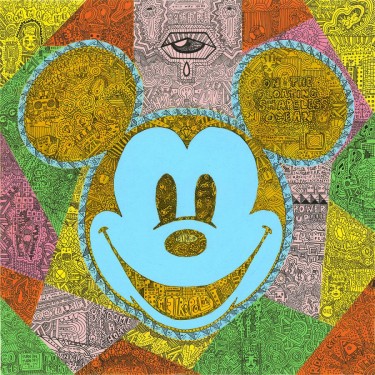 Disney fans will find plenty of Disney references and nods throughout the collection, including the cover piece, “Cazador De Seunos,” which was inspired by a trip to Disneyland. Others use a colorscape and characters from films like “Peter Pan,” “Cinderella,” and “Snow White.” There’s even a piece inspired by Walt Disney’s personal story, which any fan whose read a Disney biography will deeply appreciate. Readers are encouraged to closely study each piece, which contain many hidden images and words, and Bossert routinely points out Loveless’ themes and symbolism. One that moved me deeply was found in a piece called “Everything is Going to Be Okay” which is full of ting sketches that never stop. In this piece, one of Mickey’s ears features a person with a tear running down their cheek in a pair of mouse ears that have the name “Happy” written on them. You don’t notice it until you study it closely, but it hit me in a way that art never has before when I found it.

I first heard about The Art of Tennessee Loveless: The Mickey Mouse TEN x TEN x TEN Contemporary Pop Art Series when Dave Bossert was a guest on the Laughing Place Podcast. Like Loveless’ art itself, it’s difficult to describe without having it in front of you to see. My book shelf is full of coffee table books of Disney and Disney-inspired artwork and all I can say is that this is one of the highlights of my 20-years of collecting these types of books. My new goal in life is to obtain one of these pieces to adorn my walls. I leave you with my personal favorite, “Infinite Summer” from the “Human Condition” collection, and my highest recommendation that you add this book to your collection. 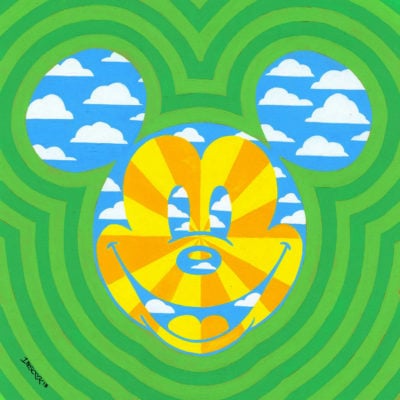 Fans can learn more about Tennessee Loveless’ artwork and even purchase originals from the TEN x TEN x TEN collection by visiting TennesseeLoveless.com.