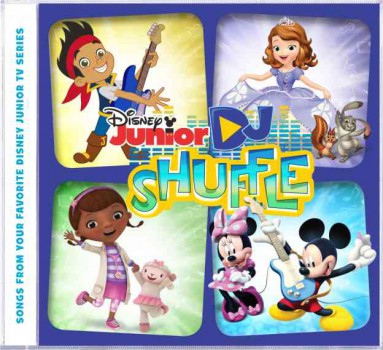 On March 11, Disney Junior and Disney Channel will premiere the music video for “DJ Shuffle.”  That same day, parents can upload videos of their children singing Disney Junior songs.  Some of these videos will appear on the Watch Disney Junior app, the Disney Junior Website, and on-air.

Also during the El Capitan Theatre’s exclusive run of The Pirate Fairy, from Feb 28 to Mar 19, there will be a pre-movie Disney Junior DJ Shuffle Dance Party.  The album will also be supported be an on-air event.

“DJ Shuffle,” the first-ever Disney Junior music compilation album will be released by Walt Disney Records onTUESDAY, MARCH 18. Showcasing the new Disney Junior anthem, “DJ Shuffle,” performed by meme master Parry Gripp (“Do You Like Waffles?”), the album also debuts the song “Hoppin’ Out With You,” a duet performed by Sofia and Clover from the Annie Award-winning series “Sofia the First” and other songs from favorite Disney Junior series. Featured karaoke tracks include “Blue Ribbon Bunny” from “Sofia the First,” “Jake and the Never Land Pirates (Swashbucklin’ Version)” from “Jake and the Never Land Pirates,” “Time For Your Check-Up” from “Doc McStuffins” and “DJ Shuffle.”

On Monday, March 24, DisneyJunior.com/DJShuffle will debut the game “DJ Jamboree” where kids can create their own unique versions of popular Disney Junior songs. The site will also feature Disney Junior lyric sheets and music-inspired crafts.