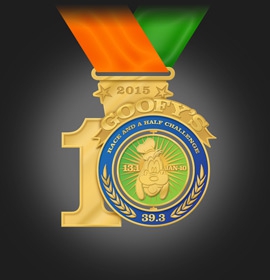 Who couldn’t use some more bling? All new medals await runners who complete races in the 2015 Walt Disney Marathon Weekend presented by Cigna, January 7-11. Registration starts today at runDisney.com.

Among the slew of new Disney Marathon Weekend medals will be a commemorative 10th anniversary Goofy’s Race and a Half Challenge medal. The 39.3-mile challenge involves completing Saturday’s half marathon and Sunday’s full marathon.

Also, the popular Dopey Challenge is back for a second year for athletes completing all four timed events in successive days (the Family Fun Run 5K, the Walt Disney World 10K, the Disney Half Marathon and the Disney Marathon) for the chance to earn six medals for completing all 48.6 miles.

In addition to the four races, the Disney Marathon Weekend will feature Disney’s Health and Fitness Expo, where runners pick up race packets, shop for the latest running apparel and technology, and meet industry experts such as runDisney official training consultant Jeff Galloway and runDisney nutritionist Tara Gidus. The expo is free and open to the public at ESPN Wide World of Sports Complex, which is also the site of the runDisney Kids Races and the Mickey Mile for the littler ones to experience.

There are also additional features for the entire family to enjoy, including breakfasts with Disney characters, Pasta in the Park parties at Epcot to “carb up” for the next morning’s races and celebrate Goofy’s Race and a Half Challenge’s 10th anniversary, ChEAR Squad amenities to help fans cheer on the runners, a Race Retreat for a VIP running experience and a Cool Down Party at Downtown Disney to celebrate each runner’s victories.

For more information and to register for Walt Disney World Marathon Weekend presented by Cigna events and other runDisney race weekends, go to www.runDisney.com. 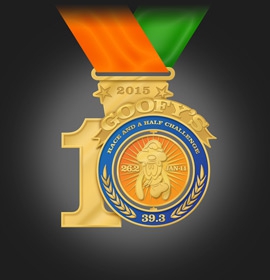