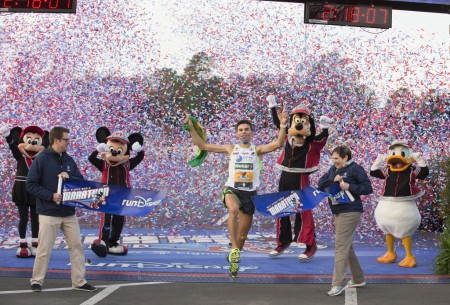 Fredison Costa is making himself at home – literally – at Walt Disney World Resort.

The Brazilian runner, who recently moved to Orlando and trains at ESPN Wide World of Sports Complex at Disney World, ran away with another Walt Disney World Marathon victory on Sunday. On a picturesque morning at Epcot, Costa left everyone behind in waltzing to his second straight Disney Marathon win and fourth in the past five years.

And he led another parade of Brazilian runners who were among the first four runners to cross the finish line. Trindade Mateus was second; Joao Fonseca was third and perennial Disney Marathon champion Adriano Bastos was fourth. It was the 11th straight year that a Brazilian won the 26.2-mile race through all four Disney theme parks, the Walt Disney World Speedway and ESPN Wide World of Sports Complex.

To complete the Brazilian domination at Disney, Giovanna Martins of Brazil was the top female winner, finishing in 2:50:20. Martins cried tears of joy after crossing the line. “I’m a teacher of disabled and underprivileged children (in Brazil) who dream about Mickey Mouse and love him as much as I do,’’ Martins said through an interpreter, “so this was a dream come true.’’

Martins was never challenged down the stretch. Neither was Costa, 37, who won by more than four minutes. That’s enough time to ride Space Mountain before Mateus crossed the finish line. At 2:18:06, Costa easily topped his winning time from last year of 2:21:39.

He said the best part of the race was seeing his coach, former US Olympic track coach Brooks Johnson, as he ran through ESPN Wide World of Sports Complex. “I could see (him) and he was just cheering me on,’’ Costa said through an interpreter. “I really feel at home running here.’’

In all, more than 26,700 runners competed in the Disney Marathon presented by Cigna on Sunday. More than 7,600 of those runners ran in all four weekend events – the 5K, the 10K, the half marathon and the marathon, completing the popular “Dopey Challenge’’ (48.6 miles).

The Disney Marathon featured events for the entire family such as runDisney Kids’ Races, the Family Fun Run 5K on Thursday, the Walt Disney World 10K on Friday, the Half Marathon on Saturday and the Marathon on Sunday. A Health and Fitness Expo ran throughout the weekend at ESPN Wide World of Sports Complex and featured the latest in running technology and fashion, as well as renowned running experts such as Jeff Galloway, the official training consultant for runDisney, and Tara Gidus, the official runDisney nutritionist.