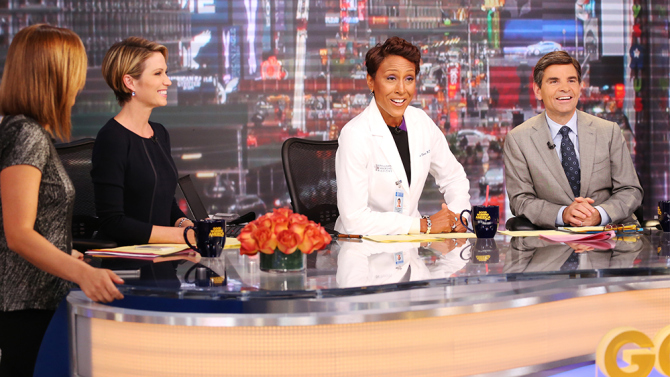 ABC News’ “Good Morning America” presents “40 for 40”, a 40-hour continuous broadcast to celebrate “GMA’s” 40th anniversary. The epic event begins on Tuesday, November 17th at 5pm EST and culminates on November 19th at 9am EST with an unprecedented on-air reunion with GMA anchors past and present. Robin Roberts, George Stephanopoulos, Lara Spencer, Amy Robach, and Ginger Zee are joined by anchors, contributors and other GMA legends that have graced the morning show set over the years. The broadcast marathon will be anchored by familiar GMA faces including David Hartman, Joan Lunden and many more cameos from GMA stars.

Throughout the 40-hour marathon, viewers will have the opportunity to experience exclusive content, interviews and performances on-air, at ABCNews.com and across ABC News’ mobile and social platforms. On November 17th, the hit band One Direction will perform songs from their new album MADE IN THE A.M, which will be released worldwide November 13th. Plus, for the first time in the U.S., the global superstars will perform their new single “Perfect” live from Los Angeles. The single recently entered Billboard’s Top 10 list marking their 5th Top 10 debut and beating The Beatles’ previously held record. In just over 5 years they have sold more than 50 million records, achieved 91 number ones and performed to over 7.5 million fans worldwide. Their performance will air on “GMA” on November 18.

Additionally, the cast of the highly anticipated film “The Hunger Games: Mockingjay Part 2”, Jennifer Lawrence, Liam Hemsworth, Josh Hutcherson, Donald Sutherland and director Francis Lawrence will join us live on November 18 to help us celebrate the 40th anniversary and chat about the blockbuster franchise. “The Hunger Games: Mockingjay Part 2” is in theatres on November 20.

• For the first time ever on GMA, ABC takes viewers live behind the scenes of the “Dancing with the Stars” rehearsals to see all of the action in real time as the finalists and pros prepare for their primetime finale.

• Exclusive access to the Marvel Universe: GMA’s “40 for 40” will be LIVE from the New York City premiere of the Netflix Original Series, “Marvel’s Jessica Jones!” Viewers can watch the live stream from the red carpet and catch interviews with series stars Krysten Ritter, David Tennant, Mike Colter, Carrie-Anne Moss and more! Plus, special appearances from the stars of “Marvel’s Daredevil” and “Marvel’s Luke Cage” as they too walk the red carpet!

• GMA’s 4040 Express: ABC Correspondent Nick Watt hits the road in the 4040 Express Bus and pays a surprise visit to the individuals who have inspired our favorite and most memorable GMA stories over the years.

• Mark Cuban, Daymond John and Kevin O’Leary, stars of ABC’s hit show “Shark Tank,” joins us for a special edition of “Ask the Sharks” where he will answer viewer questions

• Historic anchor team reunions: Anchors from past and present come together for an extraordinary and nostalgic look at ABC’s beloved morning show

GMA’s “40 for 40” marathon broadcast will be streamed live at ABCnews.com/live and will feature many more surprises.

As mentioned, “Good Morning America” will continue its celebration of this special milestone with an on-air reunion on Thursday, November 19th with many surprise guests. This special edition of “GMA” will recognize the many individuals who have contributed to the program’s success over the years. Including: