Today the Oriental Land Company confirmed their expansion plans for the Tokyo Disney Resort and released details on what’s in store for the parks in the coming years. For Tokyo Disneyland this includes rides, shows, and areas themed to films such as Beauty and the Beast and Big Hero 6. Meanwhile, Tokyo DisneySea will get their own version of Soarin’. Perhaps the most surprising item left off of the list of announcements was the Frozen-themed port of call for DisneySea. However, a press release said that “other development plans to add value to Tokyo Disney Resort, other than those mentioned in this release, are currently under consideration. Those plans will be announced as soon as they are determined,” meaning it’s still quite possible that Arendelle makes its way to Tokyo.

Here are all the details that were announced including concept art: Grand Circuit Raceway, StarJets and some food facilities and shops currently in Tomorrowland will close permanently to make way for the proposed redevelopment. The expansion of Fantasyland will include a theater for live performances and a new area anchored by a major attraction themed to Beauty and the Beast. In neighboring Tomorrowland and Toontown, a new attraction and a Disney Character greeting facility will be opened in each themed land respectively. Total investment for the development of the new area and facilities is expected to be about 75 billion Japanese yen. In addition, plans are being developed for new versions of current attractions and entertainment programs.

This new area opening in Fantasyland will let Guests experience the world of the Disney film Beauty and the Beast. With the Beast’s castle and the village where Belle lives, the entire environment of this area will make Guests feel like they are in the film. Located within the Beast’s castle will be a major attraction themed to Beauty and the Beast that can be experienced only in Japan. And in the village, there will be a shop and a restaurant. Area Overview Facilities: One major attraction One shop One restaurant
Attraction Overview Type: Ride
Duration: About 8 minutes
Description: Guests board enchanted serving dishes that dance in rhythm to the film’s well-known music and follow Belle on a romantic musical adventure inside the enchanted Castle where she dances her way into the heart of the Beast, just in time to break the fateful spell. Guests will feel like they have entered right into the film.
Opening: Spring 2020 (tentative)
Investment Amount: About 32 billion yen (tentative). 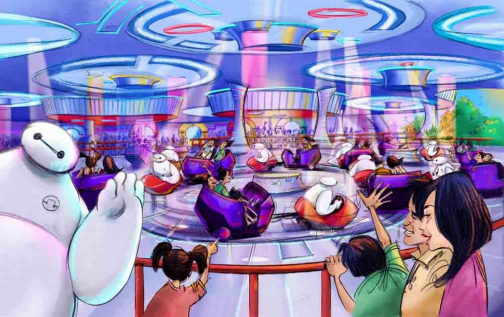 A ride-type attraction themed to the Disney film, Big Hero 6, will open in Tomorrowland. Also, for the first time in either Tokyo Disneyland or Tokyo DisneySea, a shop themed to outer space and selling popcorn in multiple flavors will open next to the new attraction. Type: Ride
Duration: About 1.5 minutes
Description: The lovable robot Baymax, from the Disney film, Big Hero 6, invites Guests to join their own personal healthcare companion for an exciting musical “whip ride” that swings them unpredictably round and round.
Opening: Spring 2020 (tentative)
Investment Amount: About 6 billion yen (tentative)

A new Disney Character greeting facility where Guests can meet Minnie Mouse will open in Toontown. 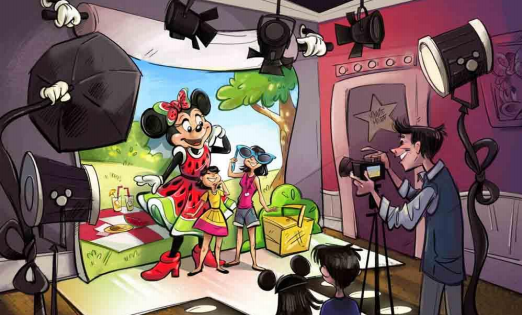 Description: Minnie Mouse, as a fashion designer, will greet Guests in her studio dressed in fashionable costume. After walking through Minnie’s design studio and her work area with interactive elements, Guests can meet Minnie in person, take pictures with her, and generally spend a memorable time together.
Opening: Spring 2020 (tentative)
Investment Amount: About 2 billion yen (tentative)
Notes: To make way for the new development areas and the new facilities, the following attractions in Tomorrowland will close: Grand Circuit Raceway in January 2017 and StarJets in autumn-winter 2017.

A large scale, simulator type attraction will open at Mediterranean Harbor in Tokyo DisneySea. In addition, plans are being developed for new versions of current attractions and entertainment programs. A simulator attraction, Soarin’ (tentative name), will open at Mediterranean Harbor in Tokyo DisneySea. This very popular attraction, which has been enjoyed by Guests visiting the Disney parks outside Japan, can now be experienced at Tokyo DisneySea with original scenes and the newest visual images.

Type: Simulator
Duration: About 5 minutes
Description: Guests who visit the attraction overlooking Mediterranean Harbor will be able experience a journey soaring over famous landscapes of the world, while feeling the breezes and scents that match the various scenes.
Opening: Fiscal year 2019 (tentative)
Investment Amount: About 18 billion yen (tentative)

Oriental Land will expand the systems to educate and train Cast Members, thus raising their level of knowledge and skills for providing services to Guests, and together with communication measures and enriched award systems, will further promote the creation of work environments where Cast Members can sense their own growth and feel satisfaction in their work. Through these efforts, Cast Members, who play an essential role in Disney parks, will be able to offer Guests an even higher level of hospitality. In addition to expansion plans for attractions and entertainment programs, other measures will be taken to improve Guest experiences at the Parks shops, restaurants and service facilities.

Plans for fiscal year 2021 and after

Investment plans for the further development of Tokyo Disneyland and Tokyo DisneySea, applicable for fiscal year 2021 and after, are currently being considered by Oriental Land. For Tokyo Disneyland, the new development plans will apply to all seven themed lands, including Fantasyland as mentioned earlier in this release. An area-based development for each themed land, to take place in stages, is intended to leave a lasting impact on the Park. The large-scale development plans for Tokyo DisneySea, making use of multiple expansion sites, are meant to achieve a rapid evolution of the only Disney park themed to the sea, and thereby broadly raising the degree of Guest satisfaction from both a qualitative and quantitative standpoint. In addition, Oriental Land intends to investigate various ways to add more value to Tokyo Disney Resort® as a whole, such as increasing the number of guest rooms at the hotels within the Resort. Moreover, regarding plans for further growth through new business other than the Tokyo Disney Resort business, Oriental Land will continue planning for a new and separate business segment that is not constrained by a specific timeframe.