3rd Update, October 8, morning: Port Canaveral did not receive any major damage and is expected to be open shortly (if it’s not already). On the map below, looks like the Disney Dream is ready to finally return to port along with a couple of Carnival ships. You can watch it live on the Port Canaveral Webcam. 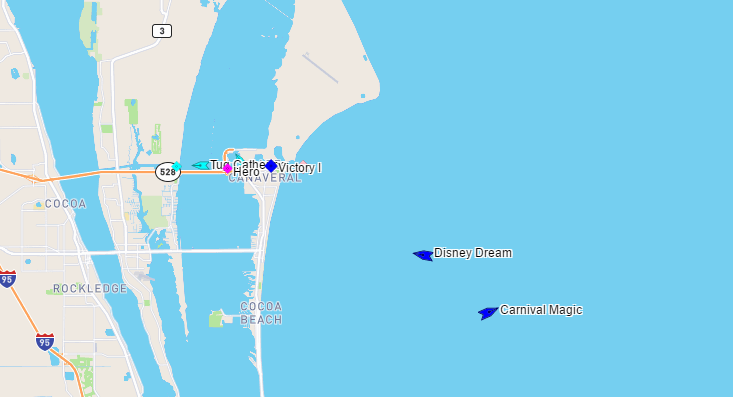 2nd Update October 8, morning: According to a post on Reddit, Disney Guest Services is compensating guests with 1-day park hoppers (valid to be used for 1-day in the next 10 years), dining credits, or other arrangements depending on each guest’s situation. Those with questions about their stay or their tickets should visit their resort concierge or Guest Services for more information and remember that compensation does vary by situation.

Update October 8, morning: Last night Port Canaveral released a statement saying minimal damage was done to the Port and that cruise lines including Disney were expected to return this afternoon after further inspections:

“We are fortunate that our cruise terminals, cargo piers, and infrastructure are intact and ready to support our customers as soon as we have the green light tomorrow from the U.S. Coast Guard,” said Port Canaveral CEO John Murray.

Port assessment teams spent the entire day surveying facilities and ensuring there were no obstacles to reopening the harbor and landside operations. Florida Gov. Rick Scott was in the area during part of the day for a firsthand look at the storm’s impact.

Initial assessments show Port Canaveral harbor is navigable with no obstructions. Cargo piers remain intact with minimal damage to cruise terminals. Some Port tenants experienced some damage to their properties.

To assist our community with recovery from Hurricane Matthew, the Canaveral Port Authority is providing 80-100,000 square feet of space in the new Port Canaveral Logistics Center in Titusville to the American Red Cross to store relief supplies to help those who need assistance in the aftermath of the storm.

Update October 7, 4:45p Eastern: Disney Springs is opening with limited availability. Transportation from the hotels recently began. According to reports, the opening was intended for resort guests but is welcoming everyone:

— Adventures with the Allens (@WithTheAllens) October 7, 2016

Lines forming at @DisneySprings …couldn't get ahold of Taco Bell so we came here 😂 pic.twitter.com/zU3dCCoojM

Update October 7, 2:07p Eastern: Orange County has decided to lift the mandatory curfew that had originally been planned to last until 7 a.m. tomorrow:

Curfew for Orange County will be lifted at 2 p.m. Citizens should remain vigilant. Significant hazards & debris may not have been cleared. pic.twitter.com/jRz9A1ogxq

Update October 7, 12:40p Eastern: All four Walt Disney World theme parks will be opening at 8a on Saturday (which, for some, is earlier than the posted time). Animal Kingdom will have Extra Magic Hours from 7a – 8a. The water parks and mini golf will have normal operating hours. Update October 7, 12:27p Eastern: The Disney Cruise Line Blog has published the possibilities guests onboard the Disney Dream are being given regarding returning to port:

Scenario 1 – Return to Port Canaveral on Saturday
If this does occur passengers will be given the option to disembark as long as it is safe to do so or remain onboard until Sunday due to the limited avaibility of hotel occupancy in Central Florida.

Scenario 2 – Return to Port Canaveral on Sunday
In the event a Saturday return is not possible, DCL is hoping to then port on Sunday for disembarkation.

Update October 7, 2:33a Eastern: The latest update on DisneyWorld.com:

Based on the most recent forecasts for Hurricane Matthew, several destinations, special events and experiences at Walt Disney World Resort are closed or have been canceled.

FOR CURRENT WALT DISNEY WORLD GUESTS
Guests staying at a Walt Disney World Resort hotel at the present time are advised to remain indoors through the duration of the storm. For more information—including important safety measures you can take—please speak with the nearest Cast Member.

While we continue to take every necessary precaution throughout Hurricane Matthew, please be aware of the following—in the instance that your vacation plans have been directly affected:

For further information about Hurricane Matthew at Walt Disney World Resort, please continue checking back throughout the duration of the storm.

Please note: the above-described cancelation details may not apply to Guests who did not book a package via the Walt Disney Travel Company or to Guests who booked a sports or group package.

Update October 7, 2:25a Eastern: The October 8 sailing of the Disney Fantasy is being altered to a 6-night western Caribbean cruise departing on Sunday, October 9, from Port Canaveral. This sailing will include stops in Cozumel, Grand Cayman and Castaway Cay. Guests who remain on the revised itinerary will receive a pro-rated refund equal to the amount of one-night of their cruise fare and an onboard credit. Guests who would like to rebook a future sailing at a discount OR cancel their sailing for a full refund.

The October 1 sailing of the Disney Fantasy is being extended by one day given the uncertainty around the impact Hurricane Matthew will have on Port Canaveral. We are planning to disembark in Port Canaveral on Sunday, October 9. We are working with the guests onboard to assist them with their travel arrangements.

Update October 6, 7:03p Eastern: Orange County, which includes Walt Disney World, will have a mandatory curfew from 10pm tonight until 7am Saturday morning. Anyone outside is subject to fines.

Update October 6, 6:07p Eastern: Our contributor at Port Orleans shares that there are flashlights in the rooms and long lines for food: 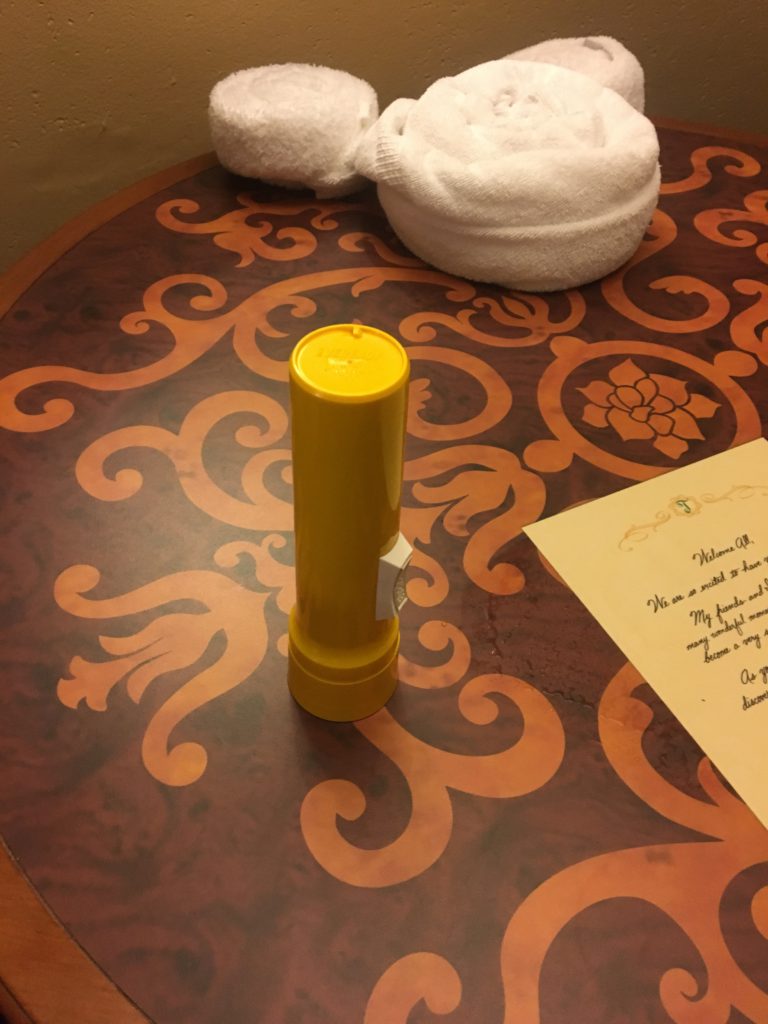 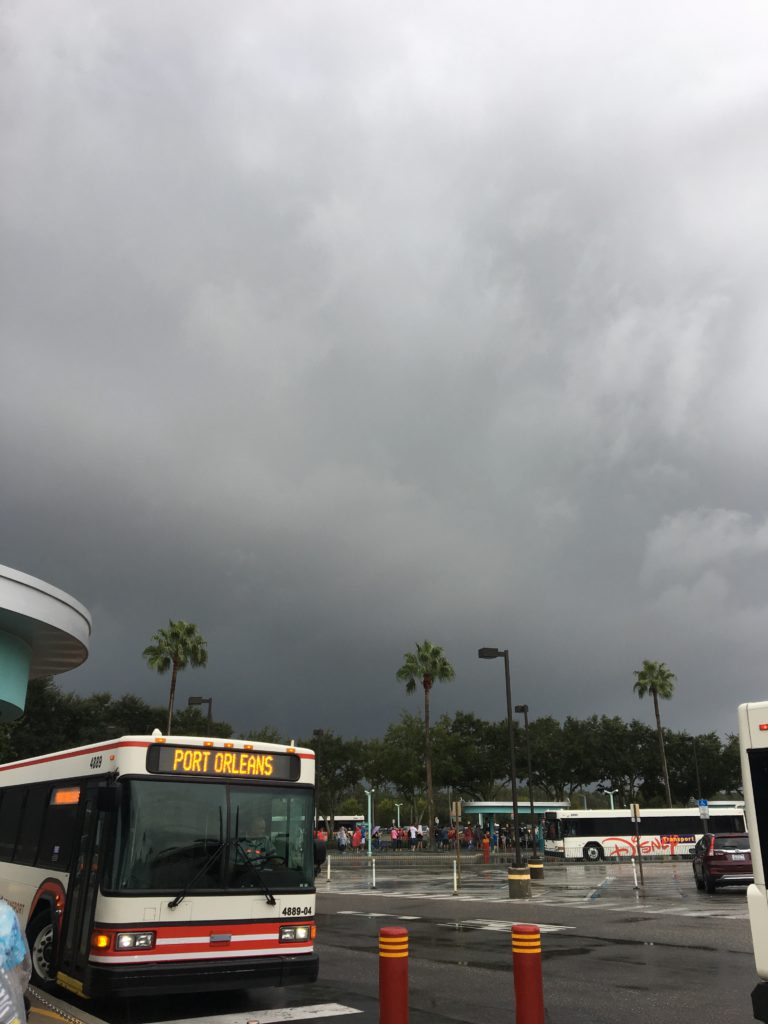 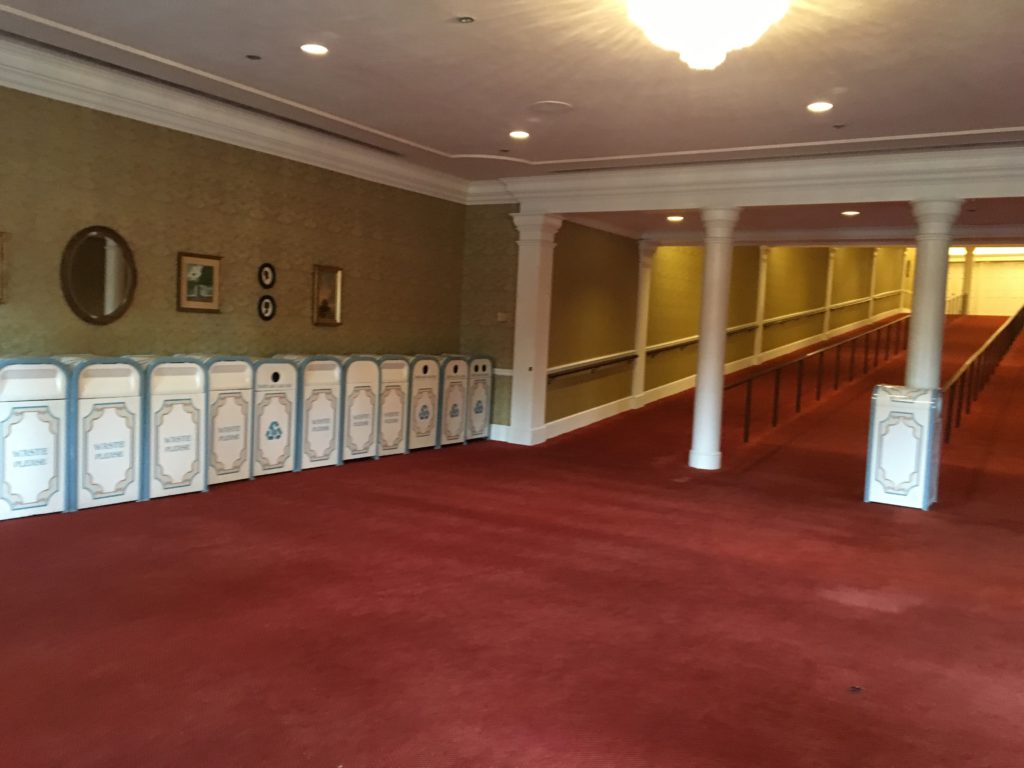 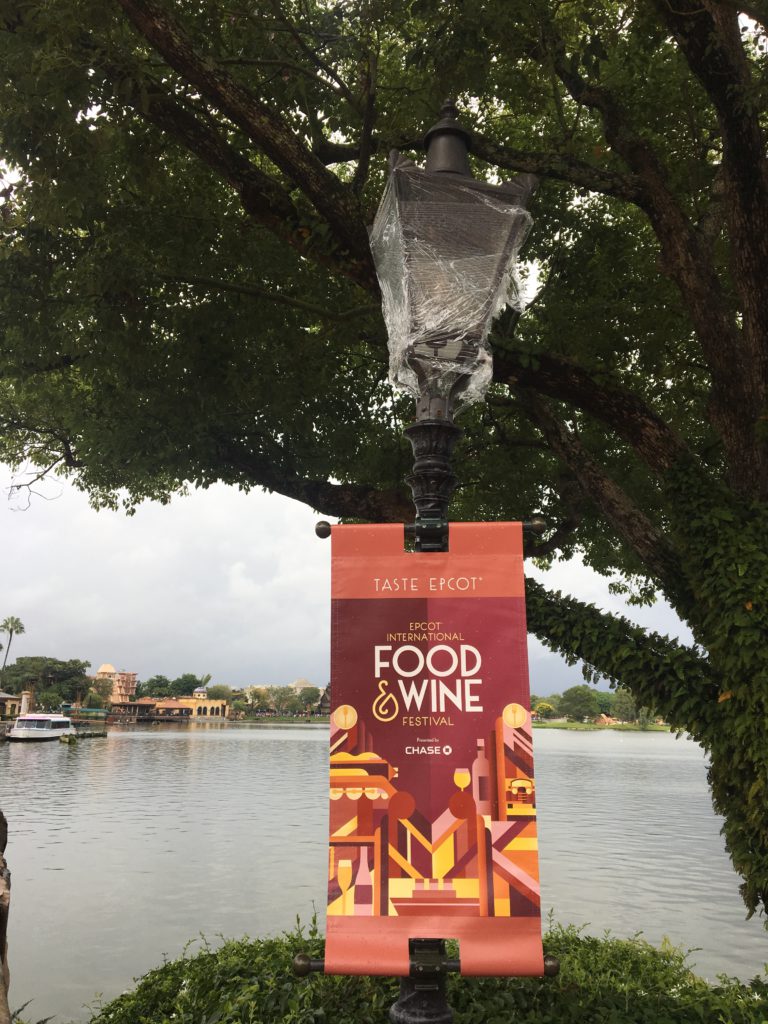 Update October 6, 3:14p Eastern: The October 8 sailing of the Disney Fantasy is being altered to a 6-night western Caribbean cruise departing on Sunday, October 9, from Port Canaveral. Guests who remain on the revised itinerary will receive a pro-rated refund equal to the amount of one-night of their cruise fare and an onboard credit. Guests who would like to rebook a future sailing at a discount OR cancel their sailing for a full refund.

Update October 6, 3:00p Eastern: Walt Disney World has advised that their phone centers in Florida are experiencing heavy call volume with unusually extended hold times and will likely remain busy for the remainder of the week. If you’re planning a future vacation at the Walt Disney World Resort, you’re encouraged to visit WaltDisneyWorld.com.

Update October 6, 2:34p Eastern: Some of the Walt Disney World anciliary locations have revised their operating hours as well:

The three Speedway gas stations at Walt Disney World will close at 6pm on Thursday.

Update October 6, 12:26p Eastern: Here is the a complete list of Walt Disney World scheduled closures as of now:

Update October 6, 12:01p Eastern: Walt Disney World will be closing all of its theme parks at 5p today and they will remain closed until Saturday. They will all be closed on Friday. The Mickey’s Not-So-Scary Halloween parties scheduled for Thursday and Friday have also been cancelled.

Update October 6, 11:09a Eastern: Hurricane Matthew is now officially back to being a category 4 hurricane with winds up to 140 miles per hour.

Update October 6, 9:58a Eastern: Orlando International Airport reports there have been 185 flight cancellations today, 111 of them inbound. The airport has also released a statement saying it will cease commercial operations around 8 p.m. Eastern tonight. Update October 5, 10:38p Eastern: Mickey’s Not So Scary Halloween Party which was set to take place at Magic Kingdom on Thursday has been canceled. Update October 5, 7:05p Eastern: It now seems that both Blizzard Beach and Typhoon Lagoon are scheduled to be closed on Friday. However, at least for now, Typhoon Lagoon still shows as being open Thursday: 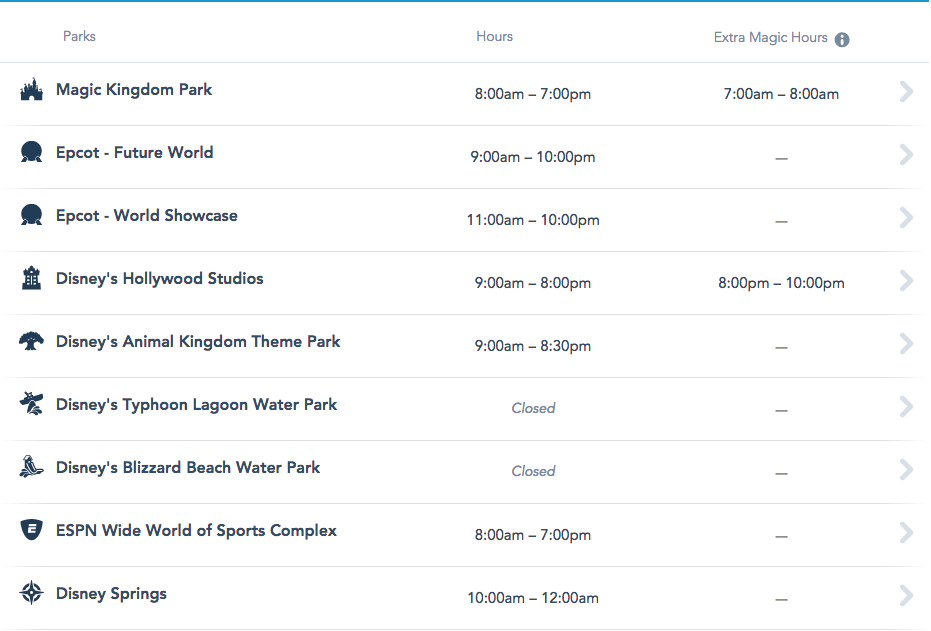 Update October 5, 5:45p Eastern: Currently the Walt Disney World site shows Blizzard Beach as being closed tomorrow. However all of the other parks and Typhoon Lagoon are still showing as open: Based on the projected path of Hurricane Matthew, as well as its expected impact on the Bahamas, Disney Cruise Line is making the following adjustments to itineraries:

While we always strive to deliver magical cruise vacations, nothing is more important to us than providing a safe experience for our guests and crew. We will continue to closely monitor Hurricane Matthew and provide updates as necessary.

Update October 5, 5:11p Eastern: Disney has cancelled the 2016 Cross Country Classic which was set to be held at ESPN Wide World of Sports this weekend.

Sadly due to Hurricane Matthew, our Disney meet is cancelled for this weekend. pic.twitter.com/6g9HrAUbq5

Update October 5, 3:49p Eastern: Fort Wilderness is now issuing a mandatory evacuation. The resort will close at 11 a.m. on Thursday and guests are being accommodated at other resorts.

Be safe out there. Disney has announced that Vero Beach, Hilton Head, and Ft. Wideness are closed a head of Hurricane Matthew #WelcomeHome pic.twitter.com/zcHKn4Px4Z

Update: October 5, 1:09p Eastern: Guests at Walt Disney World’s Ft. Wilderness Campgrounds and being offered the opportunity to move to other Disney resorts in anticipation of Hurricane Matthew.  According to the Orlando Sentinel, the offer is also being extended to the Polynesian Village Resort Bungalows, and Saratoga Springs Treehouse Villas.  Below is the note being given to current campers:

Update: October 5, 12:45p Eastern: Orange County and Osceola County (Walt Disney World crosses over both) and Brevard County (home of the Disney Cruise Lines’ Port Canaveral) are all under a hurricane warning.  Matthew is expected to hit the Florida coast Thursday night or Friday morning. Port Canaveral is also under a mandatory evacuation order. Forecasters expect Central Florida to receive 4-7 inches of rain, higher in some areas.

As Hurricane Matthew makes landfall in Cuba, Disney is making preparations in Orlando. Deadline.com is reporting, ABC’s The Chew, which is filming at Walt Disney World, has cancelled their October 6th taping and collapsed its schedule to film more shows over fewer days. Two shows are recording today and three will record tomorrow.

Deadline also writes Disney has installed their policy of allowing last-minute trip cancellations and postponements due to the hurricane.

Port Canaveral, home to some of the Disney Cruise Ships, has also been ordered to evacuate by noon tomorrow with the harbor closed to all traffic – including cruise traffic – until after the hurricane passes.  The Disney Cruise Line Blog is doing a great job covering this. As of right now they write:

As of publication, Disney Cruise Line has not updated their advisories for the fleet.
Disney Cruise Line is closely monitoring tropical weather systems in the Caribbean.
At this time, no itinerary changes have been made to the following sailings:

If needed, we can alter the itinerary of our ships to ensure the safety and comfort of our Guests and Crew. We will provide updates as they are available.

The Disney Dream is scheduled to return to Port Canaveral on Friday followed by the Disney Fantasy on Saturday. As you just read, cruise ships will not be permitted into the Port Canaveral until the storm passes and the US Coast Guard lifts the order. We have learned that the Disney Magic is prepared to sail an alternate itinerary if the system continues on the forecast track.

Note: The Disney Dream had already updated its itinerary to avoid Matthew:

The new itinerary is as follows: