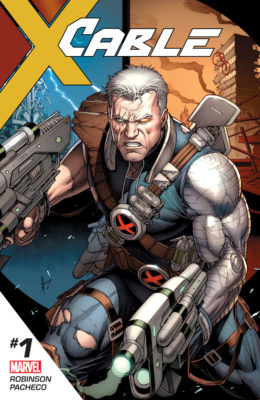 With all of time hanging in the balance, there’s only one man with the skills to save it. A new foe has emerged, bending time and manipulating history to his own sinister ends. Picking up a threat to the time-stream and the universe itself, Cable sets off on a high octane, history-spanning chase to save reality as we know it. From a six-gun duel at high noon to a swordfight in Feudal Japan, Cable must fight to keep history from unraveling.

“One of the things about Cable is he’s a ‘time warrior’”, says writer James Robinson in an interview with Marvel.com. “Time travel is part of his make-up in almost every aspect of his history – no pun intended. This series will be Cable on a race against time to fix time. And in the course of Cable’s mission, we’ll see him in a lot of great time periods like 15th century Japan, WWI, the Stone Age, Victorian England and on and on, with those time periods made more crazy and sci-fi by time being fractured by the villain of our series.”

The chase through the time-stream is on when Cable #1 comes to comic shops and digital devices this Spring.