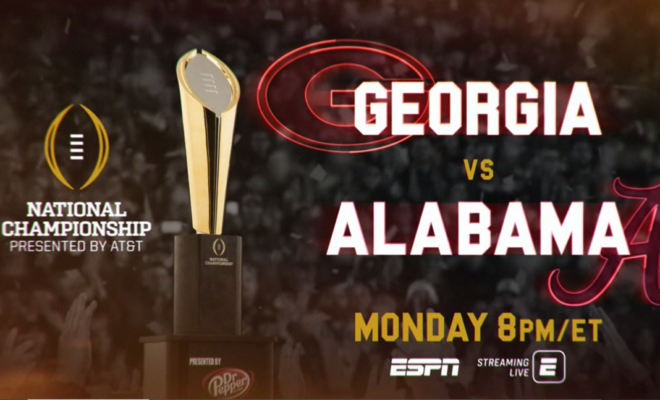 ESPN’s fifth national championship MegaCast production will be its most comprehensive to date, offering 20 productions of the College Football Playoff National Championship Presented by AT&T between Georgia and Alabama on Monday, January 8, at 8 p.m. from Mercedes-Benz Stadium in Atlanta. Fans can watch the traditional telecast on ESPN or choose to sample the alternate productions across 10 additional ESPN platforms: ESPN2, ESPNU, ESPNEWS, ESPN Classic, ESPN Goal Line, SEC Network, ESPN Deportes, and multiple options on ESPN3. ESPN Radio and ESPN Deportes Radio will broadcast the game. The record-setting number of MegaCast productions is up from the 14 offered last year and all 20 are available on the ESPN App.

ESPN debuted the MegaCast production at the conclusion of the 2014 season and has activated it for all four of the College Football Playoff National Championships. The barrage of fan viewing options has also been offered in the College Football Playoff Semifinals and, this season, for a regular season game when ESPN televised the Thursday night season opener between Ohio State and Indiana.

ESPN will have more than 110 cameras inside the new Mercedes-Benz Stadium, including utilizing more than 80 for the College Football Playoff National Championship. ESPN’s state-of-the-art production will feature two never-before-used camera angles for a national championship game:  First-and-10 marker cam and the Dual SkyCam System.

The first-and-10 cam is a camera inside the first down marker, providing viewers a look at the line to gain. ESPN first utilized the unique camera angle at the College Football Playoff Semifinal at the Allstate Sugar Bowl. The Dual SkyCam System uses a second SkyCam, positioned higher than the traditional SkyCam, providing viewers two different vantage points from, typically, behind-the-offense. Both of the SkyCam’s individual feeds will be available as part of the MegaCast production (see below).

ESPN’s MegaCast production will be highlighted by the debut of new concepts, but also utilize some of the fan favorite offerings which have become MegaCast staples each year.

This year, Voices  (ESPNU) will offers five different individual ESPN-themed centric shows/productions operating on their own. Each of the five productions will feature their own cast of ESPN personalities – and in some cases, guests – watching and reacting to the game in real-time, while providing their unique vantage point/spin on the action based on their particular show.

The five ESPN-centric shows are:

ESPNU will feature all five shows, plus the game, in a six quadrant viewing experience. While being able to see all six productions, which production you hear will change throughout the night, jumping around from show-to-show throughout the night. However, for fans interested in one particular production, they can go on ESPN3 where all five will have a dedicated ESPN3 feed.

The Homers Telecast (ESPN2) returns for its third appearance on the CFP National Championship MegaCast, as the offering provides a conversational, casual, fan-view point call of the game. Joe Tessitore will team with guest analyst Landon Collins, providing fans a viewpoint from the Alabama fans perspective, while Adam Amin teams with Aaron Murray to provide people the Georgia perspective. All four will work from the field level of Mercedes-Benz Stadium, which results in game action happening directly in front of them and each analyst reacting as fans would, such as when Alabama quarterback Jalen Hurts scored a go ahead touchdown in last year’s game, late in the fourth quarter (2 min, 35 second mark)

Coaches will watch the game, breaking down the Xs and Os, and even watch as fans, like they did last year when Clemson’s Deshaun Watson threw the game-winning, national championship-winning touchdown pass (4 min, 33 second mark).

Studio coverage will begin from Atlanta on Friday, Jan. 5, with more than 30 hours across ESPN, ESPN2, ESPNU and SEC Network leading up to the national title game. SportsCenter, ESPN Radio, and ESPN’s college football centric shows will all originate from Atlanta over the weekend and on Championship Monday. In addition, Jason Fitz and Mike Golic Jr. will host Championship Drive Live at 7 p.m., streaming live on Twitter via the @ESPNCFB handle prior to kickoff.

Paul Finebaum and SEC Network analysts Gene Chizik and Greg McElroy, as well as others, will react to the all SEC CFP National Championship game. In Finebaum tradition, the group will take phone calls from fans while watching the game and providing instant analysis and reaction. The show will be produced at a location near Mercedes-Benz Stadium.

ESPN Radio has Sean McDonough calling play-by-play, Todd Blackledge as the game analyst, Holly Rowe on the Alabama sideline and Ian Fitzsimmons on the Georgia sideline. Rules expert Bill LeMonnier will also be available for the broadcast, which is available throughout the country to more than 400 ESPN Radio stations, ESPNRadio.com, SirusXMRadio, the ESPN app, Apple Music, TuneIn and Slacker Radio.

ESPN will also bring the CFP National Championship Game to fans in more than 179 countries around the world through ESPN networks and streaming services.

Multi-platinum, seven-time GRAMMY Award-winning Top Dawg Entertainment recording artist, Kendrick Lamar, will be the musical performer for the inaugural College Football Playoff National Championship Halftime Performance from Atlanta’s Centennial Olympic Park on Monday, Jan. 8, 2018. The special performance is a free, non-ticketed event in the park, just outside Mercedes-Benz Stadium, where the game will be played. Lamar’s performance will be integrated into halftime of ESPN’s telecast of the College Football Playoff National Championship Presented by AT&T.

Pregame Field Pass brings viewers the pregame atmosphere inside the stadium and at field level starting 90 minutes before kickoff. Joe Tessitore and Adam Amin anchor the coverage as the Crimson Tide and Georgia Bulldogs take the field for pregame routines and warmups. The duo will be joined by numerous guests on hand for the SEC matchup, including the two Homer analysts – Collins and Murray. Last year, Tessitore took viewers up close during Alabama’s warmup for the game.