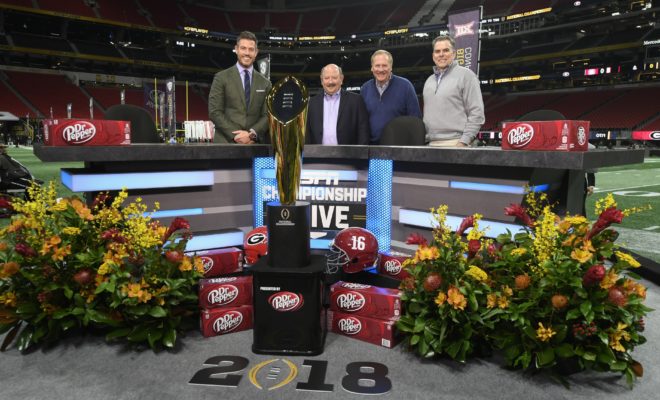 The Official Sponsorship Rights represent the highest level of sponsorship and activation. The extension includes Dr Pepper’s renewal as an SEC official sponsor and its long-term commitment with ESPN and the SEC Network. The deal expands upon the original by adding:

The unique collaboration consists of extensive exposure for the trophy across all of ESPN’s multimedia platforms during the regular season, including stops along the way at marquee games, as well as select ESPN College Football studio shows and SportsCenter. The trophy will also be featured over the course of the postseason and the College Football Playoff, in anticipation of its presentation to the winning team each year at the National Championship Games, through 2026.

“Dr Pepper is synonymous with college football. Since signing on as the first sponsor of the College Football Playoff four years ago, we’ve strengthened that connection exponentially, tapping into the extraordinary passions of fans of both football and Dr Pepper,” said Jim Trebilcock, chief commercial officer for Dr Pepper Snapple Group. “We are very proud to be extending our partnership with ESPN and the College Football Playoff for another six seasons, and we’re looking forward to giving our fans more of what they crave in the coming years.”

Said Bill Hancock, executive director of the CFP, “We are thrilled Dr Pepper has elected to extend its partnership with the College Football Playoff. Dr Pepper’s commitment to college football greatly lends to the promotion of the game and extending CFP brand awareness.”

Added Ed Erhardt, president of global sales and marketing at ESPN, “Dr Pepper is part of the foundation and the fabric of the College Football Playoff era. They’ve been first rate in everything they’ve done with us and the CFP. It has been a true partnership in these first four years. We look forward to working hand in hand with Dr Pepper and the CFP organization to bring fans the most exciting and most compelling College Football Playoff for years to come.”

In addition to supporting ESPN’s coverage of the College Football Playoff, Dr Pepper is the title sponsor of the Dr Pepper Tuition Giveaway, a season-long program that provides tuition-based awards to deserving students across the country.