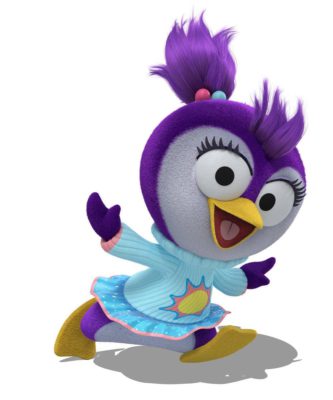 Disney Junior has revealed a new “Muppet” that will be joining the rest of the gang “in the playroom” when the relaunched Muppet Babies debuts on Disney Junior later this year. Summer the Penguin was created to have an additional female character to join Miss Piggy. Skeeter, who filled this role in the original incarnation of the series, will not be a regular part of the revival.

Summer is described as being super creative and someone who loves to draw, paint, and create. She is also said to have a big heart.

Geared towards kids aged four to seven, each episode of Muppet Babies will feature two 11-minute stories that follow the Muppet Babies on various adventures – from building a time machine to flying through outer space – as they let their imaginations take them to the farthest corners of the universe. The stories are designed to highlight creative and critical thinking skills by harnessing the power and potential of imaginative play.

DCPI Content & Media and The Muppets Studio recognized the nostalgia, fandom, and demand for Muppet Babies by tapping into insights gleaned from their digital and social media channels and together they set the creative direction for the new series.

A BIG welcome to Summer Penguin – the newest member of the #MuppetBabies family, which premieres in March on @DisneyChannel! pic.twitter.com/oeDQYOG3X6

“Bringing Muppet Babies to Disney Junior is a wonderful opportunity to reach a new generation of viewers and to creatively build on the innovative original series,” said Debbie McClellan, vice president, The Muppets Studio. “We hope to engage and delight the nostalgic fans while also entertaining new kids, parents and diverse audiences through heart and humor as only the Muppets can deliver.”