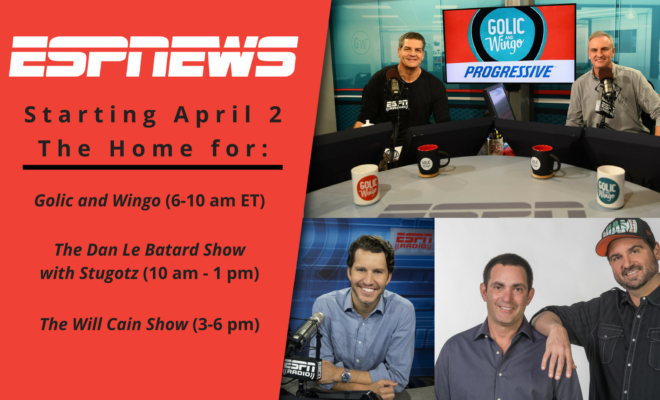 ESPN is bringing all of their ESPN Radio simulcasts to ESPNEWS. Beginning Monday, April 2, the TV simulcasts of ESPN Radio’s weekday morning Golic and Wingo and mid-day’s The Dan Le Batard Show with Stugotz will join afternoon’s The Will Cain Show on ESPNEWS, making the network the TV home of ESPN’s three weekday national radio simulcasts.

“We thought it important to bring the ESPN Radio simulcasts together, for one-stop-shopping, as it were, on ESPNEWS,” said Traug Keller, senior vice president, ESPN Audio.  “There are benefits in this move for advertisers and viewers alike, and with the other changes to the daily programming on our networks, the time was right.”

This is the same day that ESPN will debut their new Get Up morning show. SportsCenter will move to ESPN2, effectively bumping Golic and Wingo to ESPNEWS.