It’s almost time for another National Geographic “Mind Blown Mondays”! In anticipation of the next episode of Science of Stupid, premiering October 5th, we’ve got three new clips from the upcoming episode. Last week, we brought you the first half or our interview with host Ben Aaron where he talked about the show itself. Today, we get a little more personal to learn more about Ben Aaron, the person. 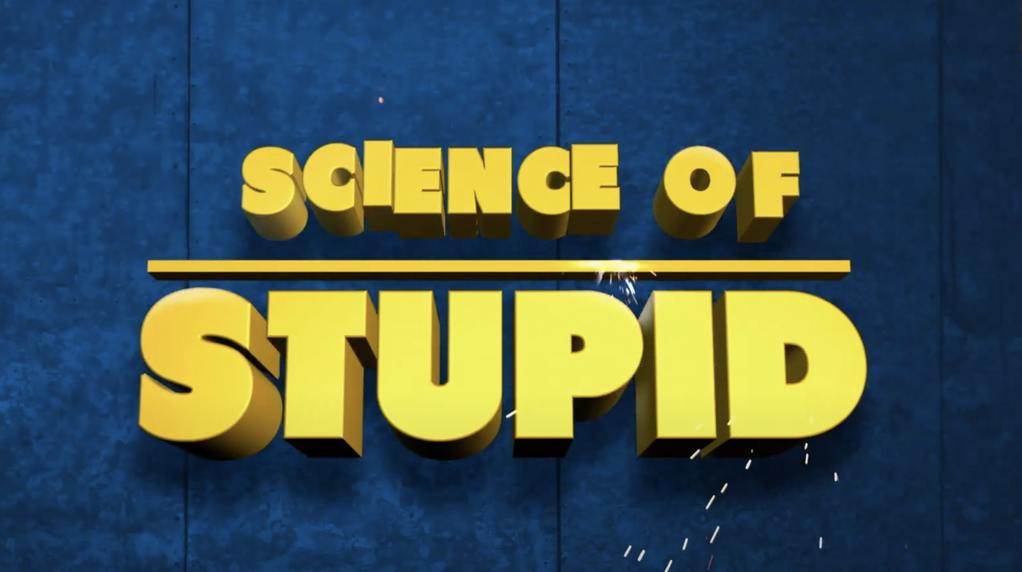 Laughing Place: Can you talk a little bit about your journey in broadcasting?

Ben Aaron: I think I started as a zygote. I was performing in my mother’s womb. No, I started very young. I started like four or five, doing videos with my friends. Maybe later, I started at like seven or eight. We would do skits and fake TV shows with our camcorder. And that always made me extremely happy. And I became a DJ when I was thirteen and I was on the microphone and then I got into radio and I was always doing public access TV everywhere I went, I did public access TV. And I moved like twenty-seven times around the country for radio and TV and lived out of my car. I kind of just carved a niche for myself in this world of television in a strange way and I learned to edit. So all my stuff… it became mine. So I wrote, produced, edited, I ran a camera, I floor directed, I did everything I possibly could to just get in the door at TV and radio stations. And I figured out who the hell I was. And then that’s how I got here, I guess.

Laughing Place: And so can you speak a little bit about what you think the power of communication through television can do to, especially in these times, I think we’re starting to appreciate the role that television can have when we’re sort of forced to watch it, in terms of communicating information and getting things out to people.

Ben Aaron: Oh, absolutely. Yeah. My stuff is so silly at times that I always wonder, am I being so trivial? Is it silly? Like should I not be doing this where there’s so many important things happening at this moment and I am dancing around in neon tights. Should I be doing this? And then from feedback from people they’re like, thank you so much for doing this because it’s such a break. It’s such a mini vacation from what’s happening. You can only doom scroll so much. It’s nice to have a little bit of a release and get a little color and enjoy. So for me, for my job, for what I do, that’s the most vital thing right now is to just keep pumping out interesting, fun, happy, colorful, dancey, great music, take people’s minds off things for a couple of minutes.

Laughing Place: Yeah. Even when you’re in school, you still need recess. Otherwise you’re not going to get anything. And that’s what’s great about this show is it balances out the fun, but you also don’t feel so guilty because you’re learning something.

Laughing Place: You don’t view it as a complete waste of time.

Laughing Place: But in fact, I actually had to rewind because I was like, no, I want to hear that concept again.

Laughing Place: I didn’t rewind for the falls, you rewind because you’re like, no, wait, I want to know how that happened.

Laughing Place: Just to wrap up with some quick questions, do you have a favorite movie?

Ben Aaron: Ooh, I have a few. I was just thinking about this the other day. I love weird, dark… Trainspotting is one of my favorite movies. Singles, which is one of the best scripts. Fear and Loathing in Las Vegas, I like these really strange dark comedies for some reason, I don’t know. And I’m not a dark person, I don’t know why I just gravitate towards them.

Laughing Place: And outside of anything you’ve been involved with, do you have a favorite TV show?

Ben Aaron: Top Gear, love it. Top Gear, it pretty much was like a pioneer in making TV and using different shots. And the chemistry between the three hosts was, this was the old Top Gear. They’re now the Grand Tour which is, this is Richard Hammond who hosted Science of Stupid in England, who’s one of the three guys and I think he’s beyond talented.

Laughing Place: And then finally, do you have a favorite theme park attraction?

Ben Aaron: Ooh, the bench outside the rollercoaster where I could sit and watch everybody else have fun and I can not get nauseous.

Laughing Place: Well, thanks so much, Ben, congratulations on the Science of Stupid. It’s a perfect antidote for so much that we are facing. Because it’s a break from crazy, yet it shows the power of science, which we all need to be reminded of.

Ben Aaron: Absolutely. Thanks for having me. I appreciate it. Nice talking to you.

And now for the moment you’ve been waiting for, three clips from the next episode of Science of Stupid! First up is a segment about the science of helicopters.

Next, we take a look at some funny balloon fails and learn about the science behind each one.

Lastly, we watch some ski jumpers get it right and wrong as Ben Aaron breaks down the physics behind why they succeed or fail.

You won’t want to miss this next episode of Science of Stupid, airing Monday, October 5th, at 9/8c right after a brand-new episode of Brain Games on National Geographic, part of Mind Blown Mondays.