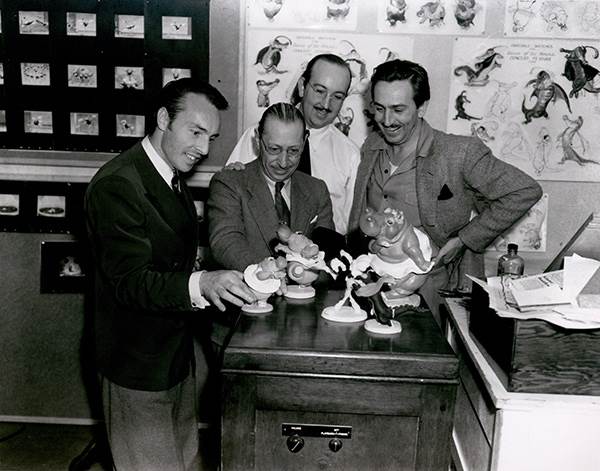 Canemaker is also a noted author who has written nine books on animation—several of which have focused on Disney artists—as well as numerous essays, articles, and monographs for the New York Times and the Wall Street Journal, among other publications. He has taught at several colleges and universities throughout the course of his career, including a guest residency at Yale, but he is most closely associated with New York University’s Tisch School of the Arts, where he began teaching in 1980 and was one of the founders of their animation program. Canemaker is a tenured professor who became the program’s Executive Director in 1988 and served as Acting Chair of the NYU Undergraduate Film and Television Department in 2001–02.

Sito was awarded the June Foray Award by ASIFA/Hollywood in 2011 for a lifetime of service to the animation community. He is President Emeritus of The Animation Guild Local 839 (Hollywood), currently serves as the Vice President of the International Animators Society (ASIFA/Hollywood), and is a member of the Board of Governors of the Academy of Motion Picture Arts and Sciences®. Today he teaches animation at the University of Southern California.

Sito has lectured around the world on animation, and is the author of several books, including: Drawing the Line: The Untold Story of the Animation Unions from Bosko to Bart Simpson (2006), Timing for Animation (2009), Moving Innovation: A History of Computer Animation (2013), On Animation: The Director’s Perspective (2018), and Eat, Drink, Animate: An Animator's Cookbook (2019).

Following the passionate advice of composer Gian Carlo Menotti (whom he later assisted in the staging of his operas at the Spoleto Festival in Italy), Mancinelli enrolled in the Music Composition Program at the Conservatory Alfredo Casella, L’Aquila, Italy where he graduated in 2006 with honors in both composition and conducting. Soon after he went on to study under the guidance of BAFTA and Academy Award-winning composer Luis Bacalov. Pursuant to receiving a Fulbright Grant, Mancinelli studied Scoring for Motion Pictures and Television at the University of Southern California and graduated in 2009.

He recently completed the original score and an original song for the animated feature The Snow Queen: Mirrorlands (Wizart Animation – Universal), and the original scores for the thriller Coyote Lake (Good Deed Entertainment/Cranked Up) and for the Italian comedy Scappo a Casa (Agidi/Medusa), starring the Italian renowned comedian Aldo Baglio. His original score for the musical Beauty (winner of the Alice Nella Citta's section at the 2018 Rome Film Festival) has been awarded the Best Original Score Award at the 2018 Genova Film Festival.

Current projects include Andreas Deja’s animated film Mushka, on which he is working alongside Mary Poppins (1964) songwriter and Disney Legend Richard M. Sherman. Mancinelli is a Sundance Film Music Fellow (2015), BMI Conducting Fellow (2016), voting member of the Academy of Television Arts and Sciences (Emmys) and of the International Animated Film Society, ASIFA-Hollywood, and founder of Fab Music, Inc.—a music and sound production company based in Glendale, California.