Walt Disney Animation Studios tweeted six Christmas cards from their talented artists inspired by the studio’s rich legacy of films and shorts. See each card below and learn more about each artist.

'Tis the season for holiday cards! Take a look at a few from Disney Animation's past celebrations. Nothing ever seems to go right for Donald Duck and that’s certainly the case for him here as he tries to string lights and ornaments on a Christmas tree. If you look closely, the white ornaments are actually Baymax from Big Hero 6! Lorelay Bové is a Visual Development Artist who has worked on such projects as The Princess and the Frog, Prep and Landing, Wreck-It Ralph, Big Hero 6 and Zootopia. Hiro’s personal healthcare companion Baymax is doubling as his Christmas tree this year in this funny card. It looks like Baymax is also powering the lights and the star all on his own! Jin Kim is an animator and character designer who started in Disney Television Animation on hit shows like Goof Troop and Darkwing Duck before moving to big screen features like Hercules, Tarzan and The Princess and the Frog. Most recently, he’s been a character designer on films like Tangled, Big Hero 6, Zootopia and Frozen 2.

The Princess and the Frog by Ian Gooding Tiana stands next to a frozen pond in Mama Odie’s magical  section of the bayou where Prince Naveen awaits his enchanted kiss in a wintery version of one of the most magical moments from The Princess and the Frog. Ian Gooding was an art director on the film and also lent his talents to Aladdin, Pocahontas, Mulan and Tarzan.

It’s Christmas in Zootopia and everyone’s help is needed to decorate the tree. Judy Hopps and Nick Wild handle the most dangerous jobs with the assistance of a giraffe while Flash slowly strings lights. Even Mr. Big and Fru Fru are joining in! Cory Loftis was a character designer on the film who has also contributed designs to Frozen and Wreck-It Ralph. 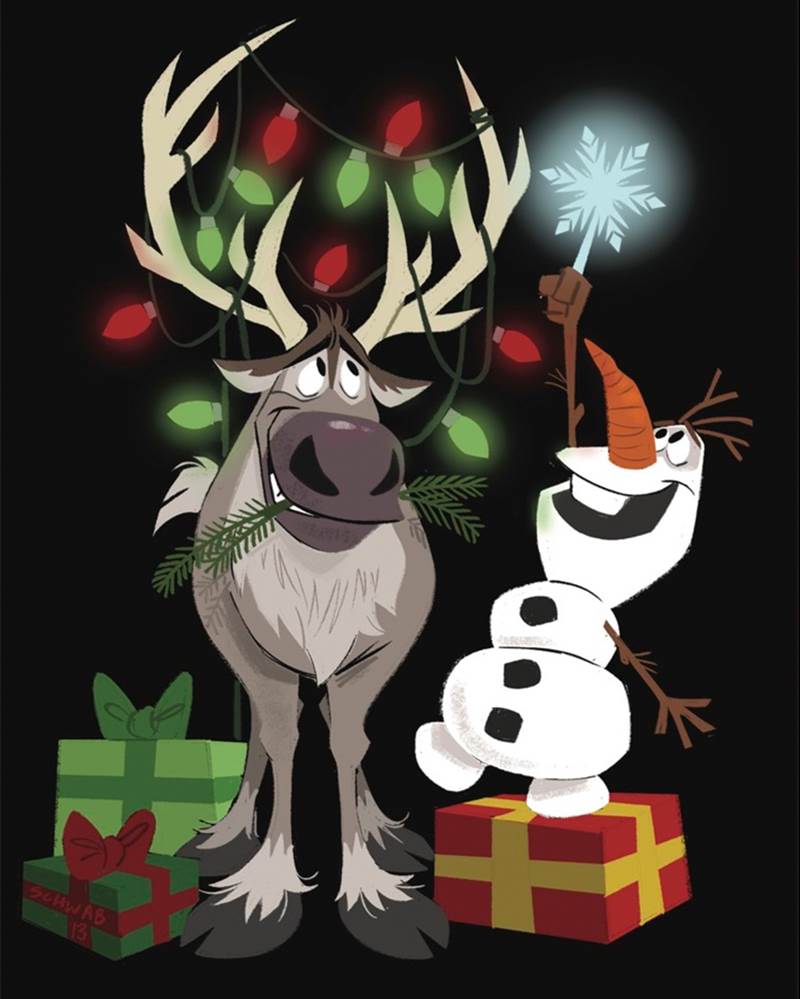 Sort of like Baymax in Jin Kim’s card, Sven has become a tree to decorate for Olaf. He’s holding pine branches in his mouth with a string of lights in his antlers while Olaf tries to figure out where to place the star. Sven doesn’t seem so sure about this. Bill Schwab is an art director and character designer who’s Disney work includes Tangled, Prep & Landing, Frozen, Zootopia, Moana and Frozen 2. 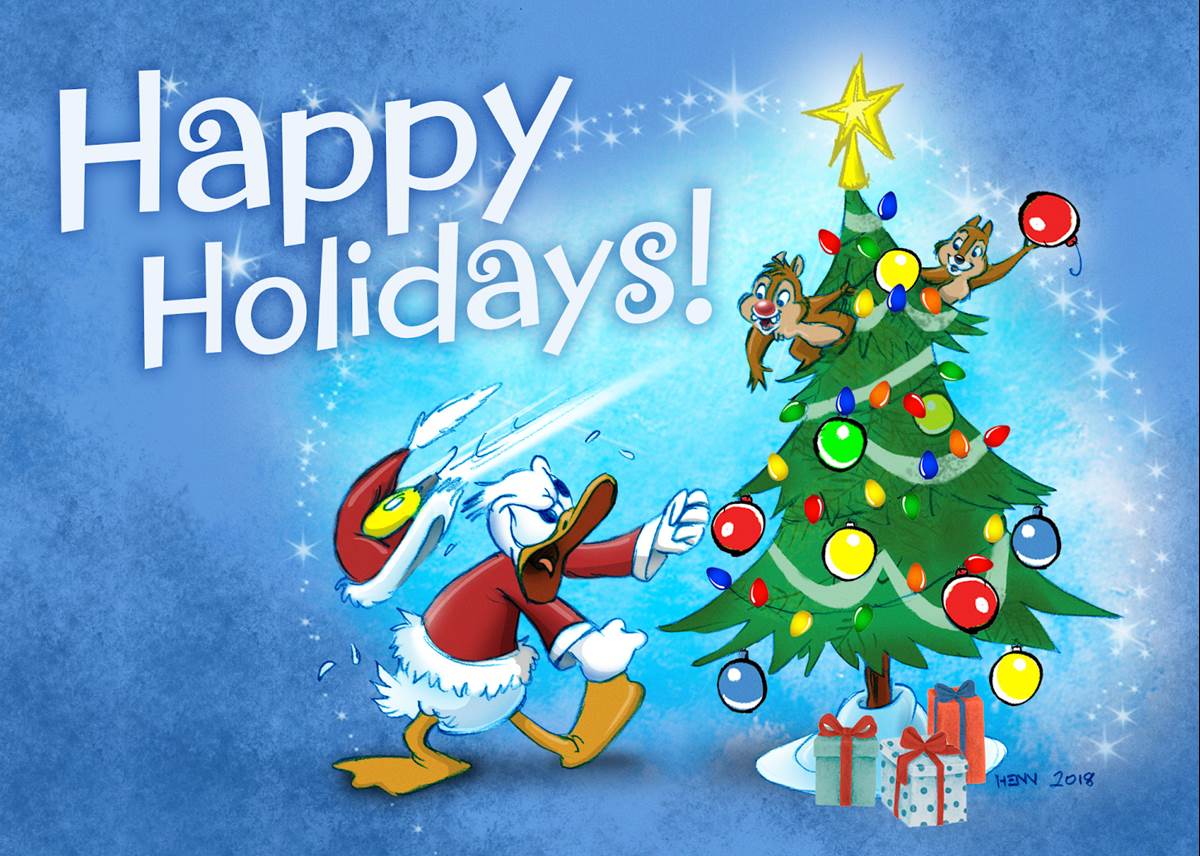 The collection ends the way it began with Donald Duck and a Christmas tree, but this time he’s being taunted by Chip & Dale. Mark Henn is no stranger to Mickey and the gang, having animated Mickey Mouse himself in Mickey’s Christmas Carol. One of the most legendary Disney Animators of the renaissance, his hand brought to life characters like Ariel in The Little Mermaid, Belle in Beauty and the Beast and Simba in The Lion King. He is still at Disney Animation and has worked on recent hits like Frozen, Big Hero 6, Moana and Ralph Breaks the Internet where he was reunited with Ariel, Belle, Pocahontas and Mulan.

Walt Disney Animation Studios continues to spread joy year after year and fans around the world can celebrate the joy of the season through these six digital holiday cards. 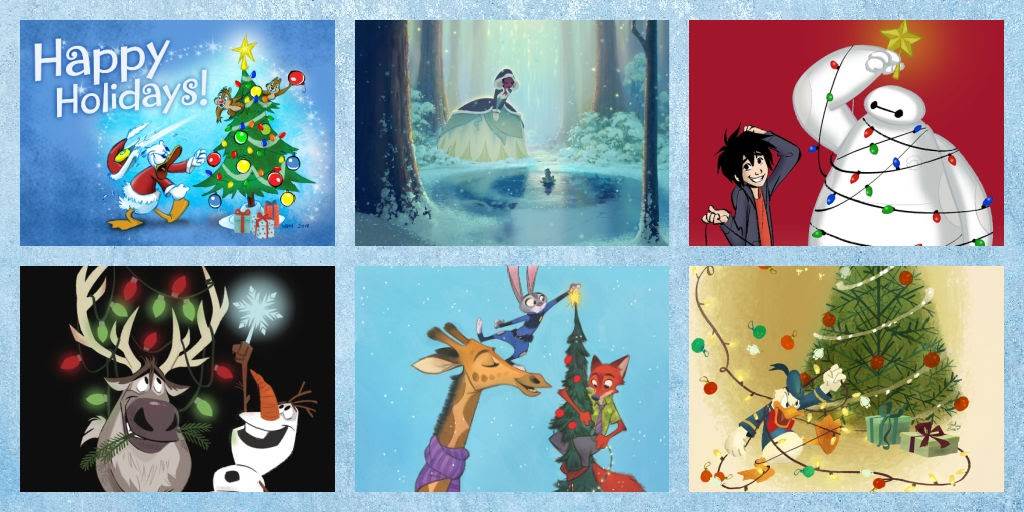