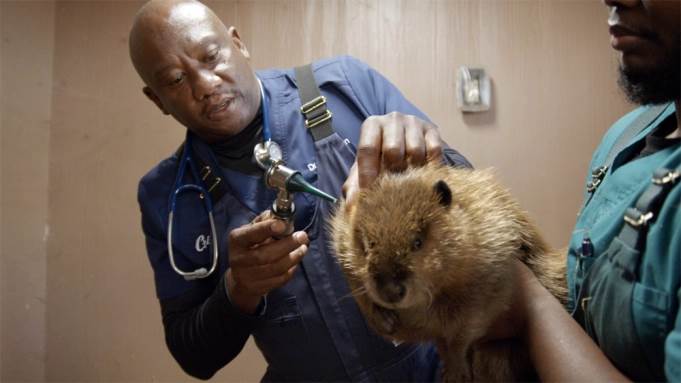 “In this season of The Incredible Dr. Pol, the doctor and his team tackle a caseload like no other. The action is non-stop as they treat the large and the small, from hustling to save a flailing Arabian horse to caring for a tiny Chihuahua left immobile after a major car accident. A variety of critters, including chinchillas, guinea pigs and geckos, keep the vets busy. The crew’s dedication is far-reaching, from customized house calls to around-the-clock critical care. There’s never a dull week, especially one that includes back-to-back emergency treatment for two dogs from the same home—a lab with a mangled leg on one day followed by life-threatening labor complications just days later for the other dog.”

“Making house calls in the far reaches of the Great North is a daunting task in the least, considering hundreds of miles may separate the houses. That challenge doesn’t stop Dr. Michelle Oakley from performing her many duties as a veterinarian in one of the most rugged environments on Earth. In addition to running an animal clinic in Haines, Alaska, she makes house calls, sometimes driving for long stretches through desolate wilderness to check on a patient. This series documents how Dr. Oakley juggles being a full-time vet, wife and mom with a sense of humor and devotion.”

“Secrets of the Zoo is back with a fifth season of unprecedented access to one of the nation’s largest and most popular zoos: The Columbus Zoo and Aquarium! Featuring the dramatic, hilarious and heartwarming stories of what it takes to care for the zoo’s 10,000 animals across almost 12,000 acres of facilities, this series takes viewers behind the scenes to witness America’s favorite zoo at work. This fan-favorite shines a light on veterinary care, feeding, live birth and expanding habitats, along with all the wildlife and wild people who work together to make it all happen!”

“Secrets of the Zoo: Tampa embraces the wild side of the Sunshine State with a stellar zoo team devoted to an exotic cast of animals, from black bear cubs to otters, panthers to manatees, and more!”

“In Hartington, Nebraska, Drs. Ben and Erin Schroeder put thousands upon thousands of miles on their truck as they crisscross America’s Heartland, employing their expertise to treat all creatures great and small. From furry pets at the clinic to herds of cattle by the hundreds, few vets have the skill and heart to take on the unique challenges that come their way every day. Whether they are up against intense summer heat, bitter cold, white-out blizzards or impassable roads, the Schroeders will do whatever is necessary to treat animals in distress, including opening their clinic on the weekends with the help of their sons Chase and Charlie or making farm calls in the middle of the frigid night. The Schroeders’ dedication to their hometown, and the animals that are a part of it, is what makes them invaluable members of their local community.:

“Lifelong friends Drs. Vernard Hodges and Terrence Ferguson are back for another wildly extraordinary new season of their hit series Critter Fixers: Country Vets. The docs, who own and operate Critter Fixer Veterinary Hospitals, located 100 miles south of Atlanta, work around the clock with their loving staff to bring heart, soul and a lot of humor to their treatment and care of more than 20,000 patients a year. Between emergency visits to the office and farm calls throughout rural Georgia, this special team constantly encounters unique cases. For the Critter Fixer team, there is no such thing as ‘normal.’”

“Nat Geo WILD is dedicating an entire week to the hardworking professionals who spend their lives improving the health and welfare of animals of all kinds. This programming event celebrates the professionals behind its top veterinary series, including The Incredible Dr. Pol, Drs. Erin and Ben Schroeder of Heartland Docs, DVM, Dr. Hodges and Dr. Ferguson of Critter Fixers: Country Vets and Dr. Oakley, Yukon vet. Vet Appreciation Week uncovers the grueling work, specialized skills and heartfelt dedication it takes to become a veterinary hero.”

“An annual tradition, Nat Geo WILD celebrates Vetsgiving, starting Thanksgiving Day, November 25. This weekend-long event features the heartwarming network vets, including Dr. Oakley; Yukon Vet; the vet duos of Heartland Docs, Dvm and Critter Fixers: Country Vets; the network’s top series, The Incredible Dr. Pol; and the fan-favorite Secrets of the Zoo. Highlighting these seasoned professionals and their empathy, love and devotion, Vetsgiving is the ultimate viewing feast to enjoy with the ones you love.”

“Partnering with the National Geographic Society’s initiatives to safeguard big cats and their critical habitats, Nat Geo WILD kicks off its 11th Big Cat Week in Winter 2022. Recognizing how big cats are continuing to face big challenges, Nat Geo WILD’s Big Cat Week sheds light on the issues that could trigger many species’ extinction. Headlining the event is the premiere of The Way Of The Cheetah (Wt) from world-renowned big-cat filmmakers, National Geographic Explorers Beverly and Dereck Joubert. Other titles featuring the Jouberts include Relentless Enemies, Ultimate Enemies, Eye of the Leopard, Big Cat Odyssey, Living with Big Cats and Eternal Enemies.”